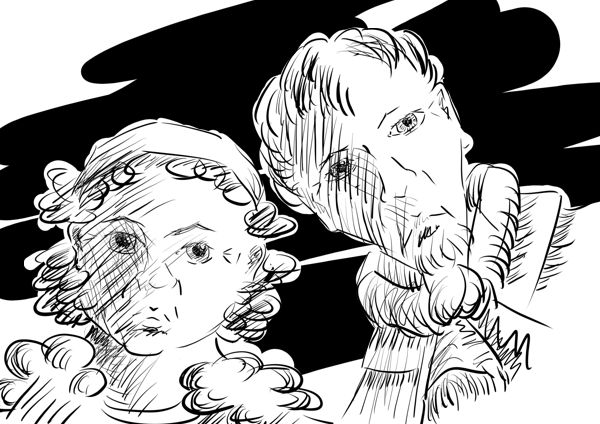 I love a good flashback!

Shylai’a was only slightly aware that she was being carried. Somehow through the burning sweaty heat in her head and the frigid shivers wracking her spine and shoulders, she could feel someone’s arms cradling her, supporting her legs. She sensed motion as well, mostly from side to side, like someone taking careful steps on uneven ground.

No. Put me down. Keep your hands away.

She tensed her arms and tried to flex them, to see if she could break the grip, but she had no strength. Her stomach heaved, from either nausea or emptiness, and it made her head dizzy. She rocked as her captor swung with each step.

“Oh, let me see her,” a voice whispered. It was a soft, matronly voice. Someone touched her forehead, then her cheek. Shylai’a tried to pull away. “She’s in a really bad way. She’s aflame with the heat.”

A deep male voice answered from immediately above her head. “Light as a child, she is, and frail. I don’t know how she’s still alive, but she is breathing.” He’s the one carrying me. Put me down!

“Is she showin’ the rash yet? Here. Set her down over here. Get some blankets.”

“I don’t know. I didn’t check. She was crying in the street just beyond the wall.”

Heat? Rash? What are they talking about? She felt her hips touch solid ground, and her back and legs came to rest. The weight of blankets covered her and their warmth soon followed. She struggled with the blankets, trying to kick them off, but could barely move her legs.

The lady’s voice whispered, “Go see if you can find Kiffra.”

Shylai’a started coughing and continued until her throat choked in a painful wheeze. Swallowing afterward hurt even more.

“I don’t know where to look! He went off healing.”

“Well, that’s what we need him for. If you don’t hurry, this one may not last.”

Shylai’a heaved herself onto her side and pulled up her knees as shivers wracked her shoulders. She moaned softly. If I curl up they can’t get to me. I’ll hide under these blankets.

“Hey! Your majesty!” The man’s voice called out. “Bring some warm water from the kettle on the fire.” There was a heavy silence before he continued, “Don’t look so put out, just bring it. I’ve got to go find Kiffra!”

After a moment came footsteps and grumbling. The matronly voice spoke again, “Thank you. Now lift her up.”

Shylai’a felt her shoulders rise with a clumsiness that contrasted sharply to the gentle support she’d felt moments before. Her head flopped over and she struggled to right it and shake it free of the grip.

A small and gentle hand helped raise her head. She opened her eyes and squinted in the light. The blurry shape of an older lady with a weathered and pudgy face smiled down at her.

“Drink this, lass,” she said, with a steaming cup held up to Shylai’a’s lips. Before Shylai’a could protest, warm water flowed into her dry mouth. Despite her fear, her thirst won out and she slurped and gulped. “A little more. “That’s good.” Some of it drizzled down her cheek and neck, but Shylai’a didn’t care. The warmth in her belly calmed the cold and the water fed her veins.

A few more painful gulps and the lady lowered her head back to the ground. She adjusted the blanket below to be a little thicker under Shylai’a’s head. Before standing, she stroked Shylai’a’s stringy, sweaty hair. “You poor thing. Hopefully we can get Kiffra back here and then we’ll get you all right as rain! You rest now.”

Shylai’a shivered, her body tense and shaking, then relaxed as the fit passed. The warmth and comfort of the blanket surrounded her and she felt sheltered. Her eyes drooped and closed.

She floated away in a windy, swirly ocean of black. Tumbling loosely through waves of thoughts and words, like space and time themselves tied strings around her. She reached out and grabbed onto the strings and tugged, pulling herself along.

Something hit her stomach hard, sending her spinning through the vines and gasping for breath. She grunted in pain and grabbed herself tight across her guts. The next hit came from the side. It drove into her like the toe of a boot. She heard laughter, in a voice she knew.

“Ya gotta watch for your other opponents,” he shouted, “or they’ll knock you over and kick you down!” For emphasis, he did just that, kicking her again.

“You gotta learn somehow,” another brother added. “Isn’t that what you wanted?”

Another kick hit her lower back, throwing her side to side. “Guard yourself or you’ll get killed!” He laughed again.

She tried to curl into a ball, her arms shielding her face, but her sides hurt too much and she felt weighed down.

“See, little missy?” her oldest brother chided, “this is what happens when little girls try to fight against men.”

Another kick landed hard in her abdomen and she groaned. “Little girls should play with dolls, not swords!”

Then the whole world around her exploded in laughter, ringing and screaming in her ears. She covered them with her hands, shaking her head, trying to numb the noise and the pain. She tumbled through the dark emptiness. “Leave me alone! Stop laughing! Stop kicking me! Mama! Help me! Stop them!”

Suddenly the laughter stopped, leaving an echoing emptiness instead. An old man floated beside her, in a gray robe. His crown was bald, but long thin strands of white hair grew from a ring around his head just above his ears. That hair floated loose in the space around his smiling face.

She stared at him quizzically. What is he doing here?

“What,” he asked again, “are you running from?”

Before she could reply or even react, the dark mists enveloped her, their shadowy arms embracing her tightly, like she was a tiny baby swaddled in soft linen and resting on a mother’s breast. The darkness soothed her, surrounded her, and she felt her burning fever cool. Her aches and soreness faded, absorbed into the black and inky mists. Her muscles relaxed, her throat unclenched and she breathed in freely and deeply for the first time in weeks.

Suddenly, she felt pressure on her back and legs again, her weight pressing down onto the blanketed ground beneath her. She felt the weight of coverings, of blankets settling down onto her shoulders, torso, and hips, sheltering her in calming warmth.

She blinked away the cool sweat of her eyelids and looked above. There was the smiling face of the lady who had helped her before. A man also knelt beside her, leaning over Shylia’a’s resting form.

Shylai’a blinked again, clearing her vision. She didn’t hurt any more, and she didn’t feel a need to cough. Her stomach was empty, but not nauseous, and her body was only tired, not achy. She tried to shiver, but didn’t need to. She was drenched in sweat, but felt warm, not burning, like she had before.

She studied the man’s eyes in wonder. He was older, but not like the man in her dream, or the man that seemed to haunt her. He wore black and his hair was also dark streaked with gray. He had a small tuft of a beard at the end of his pointed chin. He didn’t smile, but didn’t seem angry, either.

He spoke in an even, sort of factual tone without emotion. “That’s done now. You’ll be better after you rest.” The woman beside him nodded and reached to stroke Shylai’a’s wet cheek and brow.

“I know you,” the man said, as if it were more of a pronouncement than a greeting. “I helped you and your friends get into the palace last summer.”

Kiffra. The shadow mage. Shylai’a’s eyes opened up as she recognized him.

The matron slid her hand down over Shylai’a’s eyes. “You rest now. We’ll take good care of you and your things.”

Tiredness overwhelmed her as she closed her eyes under the good lady’s hand. In a moment she had fallen into a thankfully dreamless sleep.

Author’s Note: How to Flashback

As I said above, I love a good flashback. It’s a great way to introduce character back story and development. A simple flashback can explain, for example, why a character like Shylai’a is so angry so often.

It’s pretty easy to do a flashback, too. Authors use them all the time in lots of different ways. One common type of flashback, like the one here, is to have memories come up in a dream or in some other semi-lucid moment. Another common flashback is when the author just time skips a whole chapter or two into the past.

Generally, I think it’s not good to use a flashback in a really intense moment. I call these anime flashbacks, because they happen all the time in anime cartoons. It drives me crazy. The bad guy is just about to deal the crushing blow to the antagonist and, boom! A flashback! For three episodes! By then, you’ve forgotten what was happening in the original story.