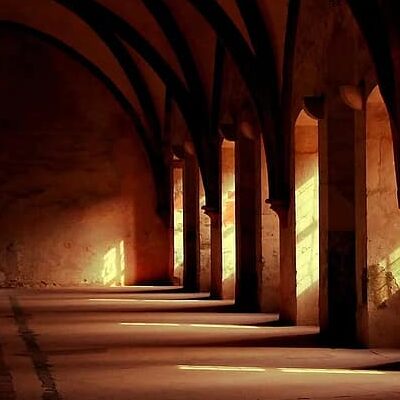 Tonklyn and the Dragonbonded followed Lathin down a long and wide hallway that had been cut deep into the mountainside. It was dark, lit only by oculus lamps every twenty to thirty yards. The floor was relatively smooth, the sidewalls rough, and the ceiling above them arched.

Lathin explained, “This path is taking us to the main service portal. It’s used much more during the day, when the servants and the dragonkeepers are hauling feed and supplies up to the aerie.”

“A portal?” Tonklyn asked. He didn’t really care about the answer, but knew that in the often meandering chatter that Lathin kept up, there would likely be a few gems of real information.

“Yeah. It’s this big round dais you stand on and it zaps you up.”

Tonklyn knew how a portal worked, but goaded him along anyway. “Where does it take you?”

“Oh, the dragon aerie is up near the top of the mountain. If it weren’t for this portal, we’d have to hike and climb with all the supplies up the side through the rocks and snow and things. Each trip would take days!”

“Yeah, days!” The youth said with excitement. “I can’t wait to show you my dragons. I’ve got three hatchlings that I care for, and two young ones. I say young, but they’re really about 40 or 50 years old. The young ones are just kept isolated and chained up. When they get older they’ll be broken and then trained.”

“Yeah. They don’t let me do that yet. It’s too dangerous. Once they’re broken, you can train them and  introduce them to a rider. I get to help train the older ones I care for.” Tonklyn noticed the lad’s steps got lighter when he talked about the dragons.

They turned a rounded corner, and stopped before a team of three high elven guards. They immediately blocked the way, pointing sharp long spears at Tonklyn. The spears had gleaming red rubies embedded in the shaft just under the spearheads. The blades themselves glistened with a fiery sparkle. Oculi, to be sure. Probably striking force. I’ll bet they burn as well as they stab.

“You guys know me! I’m Lathin! One of the dragonkeepers.”

“So you say. Show me your access stone.” The guard pointed a spear at Tonklyn. “And who are they?”

Lathin didn’t miss a heartbeat. “They’re healers.” He dug through his belt pouch, searching. Tonklyn kept a calm, quiet face and Lathin added,“One of my beasts got hurt during today’s training and they wanted her well before her session tomorrow. Ah! Here it is!” He held up a small granite stone, almost a perfect sphere with a few chips and scratches. It also bore a few figures of elvish writing that Tonklyn recognized as numbers. As soon as the guard saw the oculus, he nodded and stepped aside. The others also lowered their spears and allowed them to pass.

“Clever,” Tonklyn whispered after they went past. It will take some effort, but if I can fully convert him, this lad could be quite useful. Possibly even more than the riders themselves.

The youth just smiled and nodded. “Here’s what we want.” They stepped into a large circular room easily big enough to hold a wagon and a full team of horses, maybe two. It was more brightly lit than the hallway, and the floor held markings around the perimeter. Lathin strode to the center and set his stone into a small pedestal there.

Immediately, the marking on the floor began to glow and the room grew brighter, and the air rushed around them.

As it became harder to see, Lathin said, “Cover your eyes! No matter how many times I make the jump, it still makes my head wobbly!”

Author’s Note: Lathin seems to be very excited about caring for the dragons assigned to him but his job is essentially enslaving sentient beings. Is that right? Comment below!