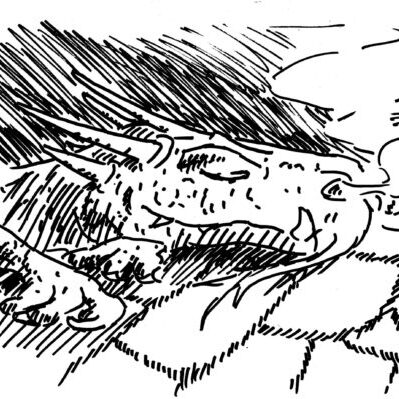 Tonklyn did, in fact, feel very dizzy for a moment, as the flash of silvery-gray light overwhelmed him. When his eyes cleared, he saw that he was standing in the center of another flat circle similar in size and appearance to where he had been moments before. He was immediately struck by a smothering and foul-smelling heat rising in waves from somewhere below. He coughed in a vain attempt to clear his lungs.

“Come this way!” Lathin called out. He stood near one edge of the circle, about to step down some stairs. Right beside him was a rock wall, partially sloped, that reached up to the stars in the clear night sky. It looked like the crest ridge of a mountain. To his left and right, the wall stretched onward, curving its jagged rim around a huge and deep basin down below the portal plate where he stood. Out of that basin came the heat with billows of noxious smoke, sometimes thick, sometimes transparent, but always distorting his view of the distant wall. The wall itself and the smoke were bathed in a deep orange glow.

Screeches and growls echoed across the chasm, but he struggled to see the dragons that were making the noises.

“Right over here!” Lathin called again, gesturing for Tonklyn to follow. He did, but had a difficult time keeping his eyes on his steps.

Next to the short stairwell was a wider ramp, no doubt for the supply wagons, and they merged into a single path, like an unnatural cliff edge that snaked around the wall. As Tonklyn stepped onto the path, he glanced down. Hundreds of feet below the platform and the path was a great bowl of bubbling and smoking lava. The heat and smell pushed him back from the edge where his curiosity had led him. His stomach, not fully recovered from the disorientation of the teleport, surged inside him and he had to fight to keep from vomiting. He steadied himself against his dragonbonded companion who stood like an almost living statue.

“You OK?” Lathin was getting insistent.

Tonklyn nodded and followed, wiping the sweat from his face with his hand. As they moved, he studied the orange walls all around the bowl. He could make out more cliff paths, ledges and doorways. Some were small, like they were designed for people, but most were much larger.

A deep growl sounded behind them, and he jumped, startled, against the warm stone. A large dragon flew over his head, circling the rim. He had a hard time seeing the color, partly because it flew so quickly and the fact that everything around him had a red and orange hue. Its rider yelled out and it swooped away from the wall for a moment. Then, the rider swung a long pole and hooked into the scales of the dragon’s neck, pulling its head sharply to the left. The dragon snarled and careened into a sharp turn before landing on one of the ledges. It folded up its wings behind the rider and stepped into that opening.

“We’re going this way,” Lathin said, pointing to a doorway on his left.

They stepped down a short dark hall carved into the rock of the mountain, then turned. This hall was better lit and a bit wider. Along each side were a dozen or so berths. As they walked along, Tonklyn saw a dragon chained in place in each one. They were large and of various colors, but none were as big as Kirraxal or the ones they had seen through the eyes of the dragonbonded in the battle at the shrine, only weeks before. These must be the young ones he was talking about. But surely these aren’t the hatchlings…

Lathin stopped walking. “These two are the ones I care for.” He fairly beamed with pride. “Aren’t they amazing?” One had scales of a deep red and its shoulders were about as high as Tonklyn was tall. It regarded him with narrowed untrusting eyes that darted between Tonklyn and Lathin.

The other was a dark blue. It looked almost black in the berth lighting, but as Tonklyn looked at its reclined form, its color was clearer. It was curled into a ball, with its neck and head resting on its tail, much like an exhausted puppy.

Both beasts were chained to the floor with thick links and heavy shackles, and had metal collars with chain rings around their necks behind their heads.

As Tonklyn approached the red dragon, it let out a deep grumble. It raised its head defensively and started to hack up burning phlegm from the back of its throat. Wisps of smoke filtered out between its teeth.

Lathin immediately reached for a long hooked staff that stood against the wall by the entrance. He used it to grab a hold of the rings on the dragon’s collar and pull the head back down to the floor. “No! No! No flames!” He shouted at the dragon.

Tonklyn held his hand out to Lathin to signal him to pause, and confidently stepped toward the dragon. The dragon tried to back away, but the hook and the chains held him firm.

Tonklyn squatted down to look the dragon in the eyes. “This one has a fire inside!”

The dragon hissed, “I willl ssee you burnnnn!”

Lathin immediately yanked its head fully to the floor. “You will NOT speak that way!”

“SILENCE!” Tonklyn shouted. Both the elf and the dragon started and went quiet, unsure which one Tonklyn was commanding.

Tonklyn looked into the dragon’s eyes again, searching deep. What a sad, sorry creature. What have they done to you? Would a dragon raised in slavery understand the speech of the Wyrmkin? Hm. Well, let’s see if my studies pay off, here.

“Let thy heart be at rest,” he said in the dragon’s ancient language. It stared back into his eyes with shock and understanding. “The time of thy freedom is near at hand. For thee and thy companions.”

The dragon stared at Tonklyn for a long moment, narrowing its eyes. Lathin looked on with fear. “What is thy name, dragon?” Tonklyn asked.

“Then lay down thy head and rest for a time, Ghorax. Soon enough, thou shalt be free.” The dragon relaxed a bit, then a bit more, and finally settled its head down on the floor. Tonklyn nodded to it and stood.

“What did you do?” Lathin asked, in a mix of awe and worry. “What did you say? Was that some deep incantation?”

Tonklyn just gestured to the dragonbonded standing next to him and they strode out of the alcoves. Kirraxal will likely have seen all that rough his creature’s eyes. He won’t be happy.

But this will be good. It will be much easier to turn these dragons against their masters, now. Even Heathrax won’t be able to stop that.

“Wait! Where are you going?” Lathin chased after Tonklyn. As they stepped into the darker hallway, a low rumbling rose from the berth of the red dragon. It quickly became a hum, a drone in a low pitch. The further along they stepped toward the portal platform, the more it grew, as other dragons joined in.

“What’s happening? What have you done?” Lathin grabbed at his hair. “I am in so much trouble!”

Author’s Note: What do you think Tonklyn is planning? What should he do? Comment Below!