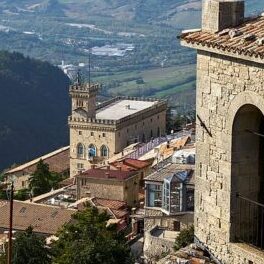 “She’s with Heathrax today,” Eddiwarth answered, without looking up. The two elves walked casually through the chilly and busy streets of Emberfire City. They were in the market sector of the city, where the streets were a little wider and a bit more level than others. Still, there were lots of stairs and ramps off the road between shops and homes that led up or down the mountainside. Some roads turned into giant hallways burrowed deep into the stone with living spaces hollowed out on either side.

Overhead hung decorations, colorful streamers of white, silver, gold, and light blue cloth. As they flapped and swung in the cold midafternoon breezes, they cast undulating shadows on the walkways, shops, and people. Every few dozen yards or so, a vent breathed hot steam into the air, wafting clouds that danced in the criss-crossed shadows, billowing as the people rushed by.

Eddiwarth was a little taller than Parith and his brown, curly hair made him stand out. Virtually all of the shoppers were pure high elves with either very light or even white flowing hair. Eddiwarth was only half-elven. His mother was a human, from the eastern plains. She had also given him skin a shade or two darker, or at least less pale, than his high elven father. They had only been in Emberfire a few weeks, and every time they stepped out, he felt out of place. He glanced over at Parith, who was clearly smirking.

“Heathrax? I feel bad for you, my friend,” Parith teased. “First, she had you competing with a giant, and now, with a dragon! That’s gotta be a tough standard to meet!” He laughed, and Eddiwarth punched him on the shoulder.

Parith tried to dodge, but the hit landed firm, knocking him away a foot or two. “Yoww,” Parith muttered, circling his arm to ease the pain in his muscles. “That hurt!”

Several of the passers by on the street suddenly cleared a path around the two, eyeing them with suspicion. Eddiwarth and Parith straightened their cloaks and kept walking, glancing back over their shoulders.

“Yeah, I guess so. Still…” Parith rubbed his arm. He was smiling a little, even through the soreness. His hair was long and straight, and also a light tan, but still darker than those in the streets around them. His ears, while pointed, were not as sharp, and lay back against the side of his head. He was also a bit more muscular than Eddiwarth or the others. Parith was a wood elf, from deep in the Umbrawood forest, at the foot of the Emberfire Mountains.

“It’s not so much Heathrax, or even Granthurg.” Eddiwarth explained, with a bit of a serious tone. “I mean, she and he, well, they were friends back in Dirae. Close friends. I get that. That’s not what’s bothering me.”

Eddiwarth continued, “He’s polite enough, I guess, but the way he talks down to me and the way he looks at me…”

“Oh, yes, I know all about it. When we first got there, they were all welcoming, like any friend of their girl was part of the family. But I can tell they don’t like having me at the table. I heard her mom whisper to the servants to serve me last. Even Karendle, a dwarf, gets better treatment.” Parith looked at some colorful cloth hanging from a vendor’s wagon. “Maybe you just need a nicer shirt!”

“I get the glares, too.” Eddiwarth sighed. “After all, I’m the one kissing their fair daughter.”

“Yes, well, that makes you the lucky one, doesn’t it?”

“Who’s the lucky one?” Thissraelle interjected. She walked up next to them from across the street.

Eddiwarth’s head jerked up as he heard her familiar voice. “Were you sneaking on us?”

“No. I just caught up with you.” She smiled and embraced Eddiwarth, who held her close. “Maybe I should have. Then I would have known what you were saying while you were talking about me.” She wore a long white cloak, trimmed in blue. Her hair was pulled back, again, hanging behind her neck and shoulders in a single tail, and a few fine golden chains decorated the sharp wide points of her high elven ears.

She reached out to feel the texture of the fabrics. “Oooh, that’s nice. You should get a shirt made of this.”

Parith laughed, and they walked on down the market way.

“Here’s a nice spot. Right by the vents.” She sat down at a wayside table. “Let’s get some steaming ales. It’ll warm us up a bit.”

Parith sat down across from her and gestured to Eddiwarth, who followed them. “You’re supposed to hold her chair when she sits down. Even a boorish wood elf like me knows that.”

Eddiwarth shrugged as he walked over. “She’s too quick for me. I’ll go order.” He stepped past the table and up to a server who was standing nearby.

Thissraelle closed her eyes and breathed in the smell of the nearby cakes. She leaned back into her chair and let her breath out slowly. Eddiwarth returned to the one remaining chair at the table and smiled at Thissraelle as he reached out for her hand.

She glanced over at Parith, who seemed lost in thought. “Is something wrong, Parith?”

“Hmmm?” He shook himself back into focus. “Oh, no, not really. I’ve just been thinking.”

The server began setting steaming mugs onto their table, then nodded to them and stepped away. Parith leaned into the table and said, not too loudly, “I’ve got a question for you.”

Thissraelle and Eddiwarth both sat up straighter. Eddiwarth took a sip and felt the warm drink in his belly. “Yes?” She asked.

“What do you remember about this dagger?”

Thissraelle shrugged. “I know about as much as you guys do. I was there when Granthurg found it. His boss on the river barge had kept it hidden away, but then there were lots of people trying to get it, and…” Her voice trailed off.

Thissraelle thought a minute, then gestured. “It was about this long, well, this long with the hilt. The blade was curved, and white. It had some intricate carvings up and down the side of the blade. Granthurg still has it. At least, I assume he does. I don’t want to imagine otherwise.”

“I don’t know, really.” Parith leaned back and sipped. “It is just odd to me that people are trying to kill to get this dagger; that it kills dragons; that we get attacked by dragons; that you’re now apprenticed to a dragon…”

“And,” Eddiwarth added, “your vision said that the dragons were rising.”

Thissraelle frowned. “Do you think Heathrax is behind all that?”

Parith shrugged. “Right now, Heathrax is probably the only dragon I do trust. It just seems to me that we and he would all be safer if we knew where that blade is.”

Eddiwarth nodded and sipped. I’m sure it’s secure with Granthurg…

Author’s Note: Do you think the Dragon’s Tooth Dagger is really safe? What do you think it will mean for the world? Comment below!