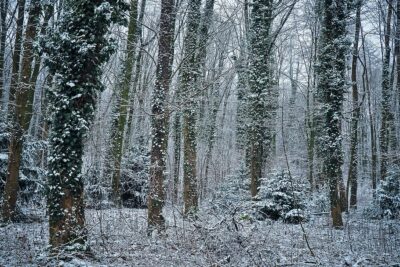 Illariel threw off her cloak’s white hood and sniffed in the cold, clear forest air. The winter winds blew their songs easily through the tangles of trees, with no leaves to slow them. She stood up from a squat on one of the wide branches of a huge and ancient oak. Here in the deep of Umbrawood Forest, the trees grew so high and thick that the wood elves built towns and villages in their expanses. Illariel was raised in Treehaven, one of such villages. In the recent summers of her young life, however, she had come to prefer the spirit of the open forest to the bustle of the other elves. She often spent weeks at a time away from the village. This year, she had decided to also go out in the winter.

She tugged her gloves tighter. Eventually, maybe even soon, she would return home, but not today. She drank in the freeing aura of the slumbering forest around her. No one was there to constrain her soul.

She took off running along the branch. Her feet kicked a few bits of the previous week’s remaining snow and it tumbled off to the distant floor of the forest below. The rough texture of the bark on the branch helped her boots grip so she ran with confidence. Each lunge made her the thick brown fur of her leggings flick and her short white cloak billowed behind her.

Just a few days before, she had been pressing supplies into a blanket roll in her treehome in the village. “Aren’t you going to pick a boy to be with this Winterfest?” The old ladies that were always with her grandmother had been teasing her about it all week.

“You’re such a pretty young sprite!”

Illariel had just rolled her eyes, but they pressed, “Oh, tell! We can keep secrets!”

The branch sloped upward and started to grow thinner. Other limbs forked away in all directions. A few yards below, she saw another strong and sturdy branch and pushed off into the air above it. It shook a little as she landed on it, but her crouched legs steadied her. The motion shook off some of the snow further outward, where it was even thinner. From this vantage point, she could see a lattice of interlocking tree branches descending below her, probably from two or maybe even three different trunks, all growing close together.

She blew out a puff of frosty breath. It was not that she minded the boys that lived in the town. She even liked a few of them. They were fun and cute, but it was just that she liked the trees better. She could run through the trees. She could feel and be in the trees. Her parents told her to be careful in the forest, but that’s where she felt the safest. She would never get lost. The trees knew the way. Besides, the trees didn’t care how you braided your hair or what color you put on your lips.

She ran trunkward for several steps, then paused before dropping down again. Once on this branch, she sat and took a breath. She was getting closer to the trunk of this tree, so the limb was large and steady. She glanced back up to see where she had come from. It was quite a ways up. She looked down past her dangling feet and saw lots of snow. She was probably getting closer to the ground, or so she guessed.

She straightened back up and listened to the winter birds arguing over their nooks. She laughed to herself and whistled a few chirps of her own. That’ll confuse them!

A grumbling in her empty stomach reminded her that it was probably time to head back to her shelter. Not a lot of sunlight got through the forest, but without leaves in the way, she could see a few rays of the afternoon sun starting to yellow.

As she stood, she glanced below.

Hey, what the flame is that?

A short distance away, the snow on the ground had been disturbed. It was kind of hard to tell for sure what it was, because her view was obstructed by dark trunks and branches. An elk? Deer? A bear?

She walked a short distance to the massive trunk of her tree. She tucked her cloak and shirt front under her waist belt reached out to embrace it, digging her gloved fingers into the bark. She stepped off the branch and began a sliding descent. The grip of her boots and knees helped her keep control of her speed, and when she got to the flared roots at the ground it was simple to step off into the snow and brush herself off.

As she stepped through the tree trunks and over their roots, she froze. I hope it’s not…

She stooped down close to inspect the tracks in the snow, then nodded to herself. They were easy to recognize. She’d seen patterns like them only a few weeks before in another part of the forest.

High elves! There’s more of them this time.

Her mind raced with the recent memories. She’d been out in the forest and stumbled on a lost high elven girl, Thissraelle. Illariel had helped Thissraelle and her friends fight off a patrol of other high elven soldiers that were trying to capture them. Illariel had met Parith as well. He had definitely stuck in her mind. He was older, maybe a little too old for her, but if only the boys back in Treehaven looked that good. Mmmm.

Illariel shook her head and traced the direction of the tracks. Why are there more high elves in our forest? I thought the others were just after Thissraelle. Is she back?

No, she would have told me, wouldn’t she? They’re my friends!

The tracks led off in a general south-western direction, and there were a lot of them. This is more than just a scouting patrol. It’s not an army, though.

Where are they now? I should ask the trees. She stripped off her gloves and felt an immediate chill on her fingers. She approached the nearest tree trunk, a huge oak stalk no less that a dozen feet in diameter. The bark was rough and cold under her fingers. As she reached inside the tree with her will and consciousness, she found it equally cold inside.

She quirked her brows, and stepped to another trunk. Still, she felt nothing, only quiet stillness.

Her breath misted before her while she considered her options. Finally she nodded. I have to get back to Treehaven and warn the elders.

She took in a deep chilling breath and jumped up onto the tree trunk. I’ll be faster in the boughs than on the ground.

But something in that breath didn’t smell right, didn’t feel right. She dropped back down and sniffed twice again. It was faint, but it smelled… like pain? Was that a smell or a feeling drifting between the trees? She stepped towards it, scanning the ground. She saw snow, tree roots, decomposing leaves. She kept moving, walking, sniffing. It was getting stronger. She could feel fear, now, too, and the pain in the wind was making her own heart sore.

She broke into a run. Moving almost straight west, she jumped a ravine and vaulted over downed tree trunks buried in snow and leaves.

What is this? What is hurting so bad that I can smell it?

Author’s Note: Why do you think the High Elves are back in the Umbrawood Forest? What should the Wood Elves do about it? Comment below!