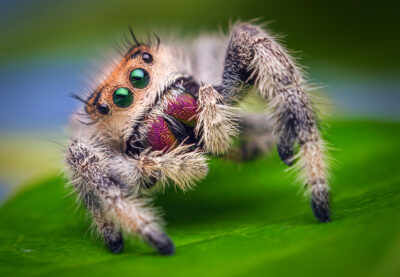 Suddenly, she stopped, and spun, searching. The stench of the pain and fear burning her nose weighed on her soul. She wiped her blurry eyes as she looked for whatever could be hurting. Another wave of fear wafted over her so forcefully she could hardly stand. She saw a motion off to her left. She turned and crouched low. Something was trying to hide behind the root collar of a giant poplar. She drew her knife and cautiously crept forward.

Two large unblinking eyes stared at her from behind the hump of the root. They were dark, deep, and only a few inches apart. As she stepped forward, she saw a domed head, covered in short hairs. She saw two more eyes, slightly smaller, on either side of the larger set. Her nerves tensed and her heart raced. The smell of pain and fear was thick in the air. It must have attacked something nearby.

The thing hissed at her with a dark menace.

Her heart skipped, surging with her own fear. She saw a cluster of hairy legs and a large bulbous body behind the head. It was the largest spider she had ever seen. Easily three feet from fangs to tail and a foot and a half high, it shifted, raising its head up, and hissed.

Illariel jumped back and held out her knife defensively. The spider quickly shifted deeper into the nook between the arches tree roots. The smell of fear in the air was like a fog she could feel, but not see.

Frozen with her own fear, she crouched ready and regarded her attacker. It looked like the tiny jumping spiders that caught bugs on the leaves all summer. But it was huge! Why wasn’t it attacking? It just sat there hiding, its legs twitching and curling. One leg wasn’t moving. It just stood straight out, straight as an arrow.

Wait. It IS an arrow! She moved away to the side so she could see the spider better. It was definitely an arrow, the metal shaft with tattered fletching sticking out of the spider’s abdomen. Its two legs on the side facing her had been severed, and from the angle of the cut she could see that they had both been slashed by a single harsh blade strike. A gory liquid was slowly dripping from each of the severed legs, as well as the arrow wound. A shiver racked through the spider’s other legs and a long “shhhhshhshh” hissed out from underneath its forward pedipalps.

She knelt and crept toward it, her hand reaching out. She sheathed her knife in her belt, then looked back at the spider, showing it both of her empty hands. “Don’t be afraid, I won’t hurt you.” Don’t be silly, it can’t understand me. How do I make myself smell like ‘help’?

She touched the tree root it was hiding behind. It didn’t flinch or retreat any further. Another shudder shook the legs and they tightened under its body. This better work. It doesn’t have much time left.

She closed her eyes and dropped her head, reaching out to the expanse of the forest, the flow of the energy of life in the trees, the healing loam of the soil of the earth, and the chilly breath of the air. She drew as much of these all as she could into her in a sharp breath, wrapped them up inside her own tiny soul, and willed them to flow into the dying spider.

As it flowed through her, she felt the power and for a moment was one with the trees and the earth. She could feel into the spider and feel its wounds closing up, and fresh blood being made. The tension in its legs relaxed and they flexed, once again supporting her weight. It’s a she! And very young, almost a baby.

Illariel collapsed, exhausted, and rolled onto her side in the rotting leaves and snow. She rubbed her head to try and stay alert. Now empty of spirit and power, her tired arms and legs moved slowly.

Something sharp poked her ribs. It wasn’t a stab, more like a gentle prodding. She twisted and looked. The spider was there, beside her, pressing a leg against her and rolling her over onto her back. She shrieked and tried to scoot away, but moving was difficult. Well, that’s it. You going to eat me now? But the air didn’t smell of fear, anger, or even hunger. There was a fresh, new scent emanating from the spider. It was… calming. No more pain. Illariel leaned up on her elbows, and the spider scuttled back a bit, regarding her with many large, unblinking eyes.

Illariel sat up and shook her head, then her limbs. They felt cold and stiff, but were warming up a bit. She glanced over at the spider. “You OK, now?” The spider tilted its head on its legs in a ‘confused’ sort of way. Illariel laughed and tried to stand. “Flames, healing you up really took it out of me. You must’ve been really close to the end, there.” Illariel leaned with her hands on her knees for a moment while she got her balance firm, then stood fully erect. She stretched. “We’re going to have to do something about that arrow, girl. But not now. I can’t do anything more. And I doubt I’ll be able to do anything about your missing legs. Sorry.”

The spider scampered over the ground and roots in short, quick bursts. She stopped and twirled around to redirect her face at Illariel. She tapped one of her front feet quickly on the ground a few times, and let out a few sharp bursts of hiss. Then she sat, waiting, expectant.

“Hey! Where are you going?” It looks like missing two legs isn’t as much of a big deal as I would have thought.

“Am I supposed to follow you?” Illariel took a step toward the spider, who flipped back around and jumped away. Illariel shrugged, “I guess so.”

Author’s Note: Where do you think the spider is taking Illariel?