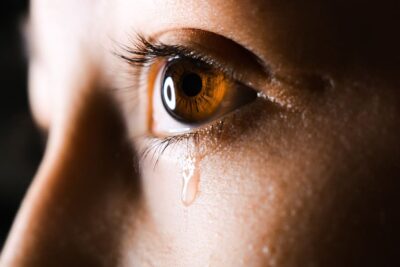 Illariel scrambled up a sharp and snowy rise. She struggled to find footing as she pulled herself over the crest between two huge tree trunks. She sat, feeling her bottom get chilled by the snow, and looking around for the spider.

“Hey!” she shouted in between heavy breaths, “Where’d you go?”

She hadn’t been following the huge little spider for long, but the terrain had been difficult. The spider had scampered and jumped easily across the ridges and rocks, from one tree trunk to another. Now, the trees were getting orange and their shadows long in the fading sun of the winter afternoon.

Since  Illariel couldn’t smell the spider girl’s fear or pain, following her wasn’t so easy. Illariel scanned the ground. No tracks, nothing. Hadn’t she wanted me to follow her?

Illariel’s eyes caught a bright yellow shimmer in the sunlight between two tree trunks to her left. What’s that? It was a tight thin line of shimmering threads stretching from one tree’s roots to the trunk of another some four or five yards away. Illariel stood and approached it. It stuck firm to the bark of the second tree, then angled up to another one further away. She quickly followed it to a massive rotted out stump of a long-fallen oak where the spider sat in the snow and moss, patiently waiting. The spider lifted her head and chittered sharp excited hissing noises. She tapped one of her forelegs insistently on the log, then spun around and jumped away.

“Okay, okay, I’m following.” Illariel sighed and with a run, jumped up onto the grounded tree. It was large and slick, but she pulled herself over and landed in snow on the other side. She stood and dusted herself off. She heard the spider girl ch-ch-cheying excitedly. “Yes, yes, I’m right behind y–”

Illariel sucked in air and dropped her jaw. The first thing she saw was an enormous spider, bigger than a wagon or even a full grown bear. It was mostly black, with some wide stripes of white and shimmering blue streaked across its hirsute legs and back.

It was not moving. It leaned to one side, half covered under a fallen snowbank, its thick legs curled up tightly underneath its body. All of its wide open eyes stared out with an eternal emptiness into the darkening forest.

Illariel could not breathe. She reverently took a few steps toward it. She reached out and touched the leg. It was cold, like the air, and the hairs were thick and coarse. It made no sounds, and it shared no smells. The snow around it was tossed and scattered by many footprints, and covered with now-frozen sprays of bluish ichor.

She heard chittering and clacking beside her, and looked down to see the excited little spider jumping and spinning on the snow. First, the little one looked at the gigantic spider laying still, then she turned and raised her head to Illariel. Then, she would dance back and forth between the two. A new smell filled the air around Illariel and she felt a thread of excitement, of hope, of pleading. The little spider tilted back and looked up at her, tapping her pedipalps together nervously.

“Oh, no.” Her hands covered her mouth. “Oh, no, no, Creator, no.” She spun and looked around, suddenly taking in things she had missed when she first arrived at the scene. The snow was well-trampled, and arrow shafts were everywhere. Just to her left, half buried in the tumbled snowbank, was the bloody body of a high elf soldier, his spear sticking up out of the snow. She stepped past him and saw another, covered in a thick tangle of webbing, and his leg fully severed. Blood stained the snow below him.

She shrieked and ran back to the giant spider. The smaller one stepped back, unsure. Behind the body, Illariel saw thick layers of webbing, a winter shelter, that had been slashed and then had collapsed under the weight of the snow above. Two more spider bodies lay there, one about the size of her friend, and another only slightly smaller, both with their legs tight and curled. Their cracked and frozen carapaces lay still and black against the blue and white snow.

Illariel fell to her knees by the snow bank and began to sob. The full weight of what had happened here pulled her sinking heart to the frozen snowy ground. Her tears stung cold on her cheeks.

She knelt with her shoulders shaking for she didn’t know how long. Soon she felt a poke on her shoulder. It nudged again soon after. She looked up into the pleading eyes of the little spider. It let out a long, gentle hiss with a questioning rise as it faded.

Illariel cried again, her heart pounding with her own pain. “I’m sorry,” she gasped, “I can’t help you! I can’t fix this! I can’t…” She buried her face in her shaking hands.

Illariel coughed as she breathed in a harsh and rank smell, one of bitterness, anger, and hate, that drifted past her. She winced her face and tried to wipe the burning feeling from her nose and eyes. A loud whistling hiss sliced through the chill and a hard pounding shook the ground. She flipped around. Near where she had entered this horrific scene now stood another full-grown spider. It pounded its forefeet hard into the ground in anger. It raised its head up and hissed, clacking its sword-like fangs together. It stopped pounding, dropped its head to the ground, and raised its hind body. Its back legs tensed. Then it jumped.

Illariel’s eyes opened wide and she screamed. The spider flared its legs out as it flew through the air toward her, larger and darker by the moment. She tried to turn over and scamper away, but all her legs would let her do was to curl up and hope her death would be quick. The monster landed above her with heavy thuds, smashing sticks and tossing leaves and snow. Illariel gaped up into its face. It raised up on its forelegs, ready to plunge two massive glistening fangs deep into her.

Something heavy and hairy landed on her chest, knocking her breathless. She coughed and tried to see, but it blocked her vision. A flurry of pointed footfalls scrambled across her, with a rash of chitterhisses, and then lunged away. One leg slipped and scratched her face. She swung her arm up protectively and fell back flat.

The smaller spider clung to the face of the larger one, her legs gripping the hairs on its head. One of the larger spider’s pedipalps was tangled up with its long fangs in a thick net of webbing. The other palp vainly thrashed at the little spider trying to knock her off. Smells flew through the air in a rapid and dizzying zephyr, leaving Illariel bewildered.

Then the giant spider stepped slowly back, and lowered itself. Illariel got control of her legs and scrambled herself away a few feet. She wiped her burning eyes with cold snow.

The larger spider moved further away, its legs and motions calmer. The small spider jumped down and scurried over to stand beside Illariel. The scents surrounding Illariel were still very complex, but not as chaotic as before.

Finally, the giant spider crept slowly forward, hissed quietly, and dipped its head to the ground before Illariel.

Illariel tensed. What’s going on? She noticed the smaller spider do the same, first facing her, then facing the larger spider.

Oh. Ah. What do I do? Illariel hesitantly sat up, then knelt and bowed low, first before her young friend, then before the giant. She held her breath. I hope this works.

The two spiders hissed together and filled the air with a sweet and oddly calming scent. Illariel raised up and sighed, then snuffed her teary nose.