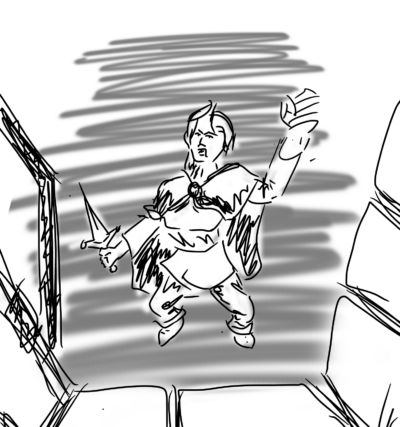 Shylai’a pounded on the heavy wooden door. “Please!” She shouted, “Let me in! I need to cross the bridge!”

The high city wall that she had followed through the slums for over a mile  ended here in a large blocky structure topped with parapets and defensive overlooks. It continued on as a high bridge supported by several stone archways across the wide Lesser Wynne River. Bright lights and decorative streamers hung from the arches, ready for Winterfest. They reflected oddly in the quiet waves of the flowing river.

She drew her sword and pounded again, using the pommel. A window creaked open a few yards above the door and a silhouette leaned out. “Go away! The bridge is closed!” It was a man’s voice, but still high and whiny.

She stepped away from the door and craned her neck back. “I can see that! Can you open it? I really need to cross!”

“I can’t go home until I cross the river!”

“You got any silver?”

She instinctively shoved her hand into her pocket and felt the few coins she had. She knew most of them were coppers. She looked back up. “I’ve got a few shards…”

“Pahh!” the man laughed, waving his hands to shoo her away. He swung the window shut with a bang.

“You! You…” Shylai’a tossed her cloak back off her shoulder and rushed the door again, pounding as hard as she could with the sword hilt. “Flaming stones, Let me cross!”

The window swung open again. “You’d best be going away! The city guard will be around soon, and they’ll arrest you for breaking curfew. You’d best put that sword away, too, or they’ll chop you up for it!” The window slammed shut again.

“No! Come back! Please!” The gentle yellow lantern light flowed out the silent window. “Hey!”

When no response came still, she kicked the dirt below her. It hurt her frozen feet, but she couldn’t stop herself or her anger. She kicked again. “Curse your steps!” She shouted at the window.

She swung her sword in rage at the night air. With a mighty grunt she attacked the door, slamming her sword hard into the wood. She swore again and yanked it back, but it didn’t come loose.

Aargh! She yanked it again, but it only shifted in the wood. Come on! She heard heavy footfalls from back down the street. Is that the guard or thieves? She started working hard at the sword, up and down, until it suddenly jerked loose. She fell backwards off the small brick porch before the door and landed hard on the cold ground between the bridge house, the outerwall shanties, and the dark riverbank.

Immediately, she rolled over, grabbed her sword out of the dust, and scrambled into the shadow of a shack. She huddled there, her heart pounding, her breath heavy, and pulled her cloak tight around her knees. She couldn’t see the bridge house from her hiding place, so she listened for the footsteps. They slowed, then stopped.

She sucked in a cold breath and held it in worried anticipation.

She leaned forward to see if she could get a glimpse of the guardsmen.

“What are you afraid of?”

Shylai’a jolted and spun around in surprise. “Huh?”

“What are you afraid of?” An old, balding man in dirty gray monastic robes and a craggy wooden cane knelt on the ground beside her. His head was leaned to one side, as if he were trying to look past her, or straining to hear a distant sound.

Shyli’a’s quickly shuffled away from him. Her eyes narrowed. “What? Be quiet, old man,” she whispered. She leaned out again, but still couldn’t see the tower or the guard.

“But the sun is so bright, and it’s a beautiful day!”

She looked back at him, confused. The nearby glow of someone’s lantern reflected on his smile. Her brow tightened. “I know you! I saw you last summer in the plaza. I’ve seen you wandering all around the city, preaching nonsense…”

“Yes, yes, yes. That’s me.” He laughed and clapped his hands. Shyli’a quickly grabbed them and shushed him. The madman just smiled.

“But what are you afraid of?” He poked her shoulder with a thin finger.

She pushed it away. “I’m not afraid of anything!”

“Hmm. But I see you hiding. And on such a beautiful meadow as this…”

“You are. How can you be renowned when you are hiding?”

Ok, well, yes, I am hiding, but what meadow is he talking about? Wait. Renowned? What?

She wiped her eyes in frustration and confusion. “Ok, I’m leaving. I’ve got to figure out a way to get on the other side of the river.” She stood and crept forward, looking for guardsmen. I think they’ve gone, now.

“Yes, the river. There are fish in the river, aren’t there?”

“Yes, well,” she whispered back over her shoulder, “you go look for the fishes and the meadows, and I’ll be on my way.” She crept up to the edge of a wall and, leaning way over, slid her gaze out into the street by the river.

“Ok! I can help you with that!” He jumped up and shoved her from behind.

She shrieked and stretched out her free hand to stop her fall, but hit hard and loud into the middle of the street in a flash of cold gray. She jumped up to her feet and wiped her blurry eyes. “You flaming stupid old man!” She brought up her sword. “I’ll cut you so deep—“

He’s gone? She also noticed that the shanties were not the same. They were in front of her, instead of behind. Shocked, she straightened and looked around. Where’s the river? and where’s the guard? There’s no guard… “Where are you?”

The river was now behind her, and where she was standing she could see what moments before had been the far half of the bridge. What? Where am—

She squinted at the shanties in the dark on the other side of the river. They looked like where she had been hiding moments before. She saw the small figure of the mad old man near them, jumping up and down in a silly dance. He waved at her, grinning, then disappeared into an alleyway.

Her arms and sword dropped limp to her side under her cloak. She slowly turned around twice, looking for her bearings. She somehow had ended up on the other bank of the Wynne, on the side where she needed to be. How did I get across? What did he do? I don’t understand.

She shook her head, trying to clear it and make some sense of it all. Home. I’ve just got to get home. Her cloak billowed as she walked away to find her chapel.