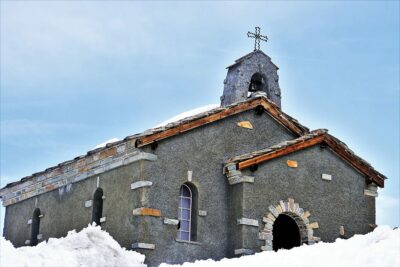 Shylai’a and other homeless people in the OuterWall of Twynne Rivers shelter in an old Chapel. She wonders about what the old man said.

The next day brought heavy snow to Twynne Rivers, with steady winds. Instead of light flakes dancing to the ground on musical breezes, the snow chunks fell swiftly, angled by the wind, onto the streets and roofs of the city.

Inside the old chapel, Shylai’a and many other homeless sat by a fire in the center of the floor. The chapel was a sturdy structure, one of the largest in this area of the Outerwall quarter, with a high, vaulted ceiling. Not as big as a full cathedral, as it only had two rooms: the chapel and a storage room behind the altar. The chapel floor had been cleared of pews, most of which had been hacked to pieces to use as firewood, so a scattered collection of a dozen or so people huddled around a makeshift fire pit in the center. The smoke rose up and swirled out the broken windows above them, as the wind blew through, scattering some snow into the sanctuary. The roof was old, but mostly complete, offering good protection from the storm.

Shylai’a shivered with the draft, knowing that it would have been far worse for her to be out in the direct wind and snow.

The incident at the bridge had left her confused. There must have been some magic there. Something the old man did. She had thought about it as she had walked all the way through the dark streets and alleys to the chapel. When she had arrived, she had been quiet and sullen as the others of her beggars bond had shared what crusts and scraps they had managed to scrounge that day. Then they had set guards and all curled up for the night.

When she took her turn at watch, she still felt troubled. If the guard had seen him using magic, he could have been arrested, maybe beaten. Why would he do that? Why would he risk his life or comfort to help me?

The winds had picked up in the dark of the night. The cold helped keep her awake during her shift. She was not even halfway through when there was a thump on the main door, and it pushed open with a creak. Shylai’a jumped to her feet, tossed her cloak off her shoulder and drew her sword. In a couple of fast strides she was between the door and her fellow beggars.

A thin, frail man fell through, landing on his hands and knees. He crawled in as the snow blew over him. He wore only a tunic and leggings, and barely had the strength to move.

Shylai’a sheathed her sword and stepped to the door, closing it behind him. She helped him stand and walked him over to the fire. Once he had sat down, she tossed on a few more wood sticks and took the small metal kettle off the flames. He held out his hands to the warmth of the fire as she shook out her own cup, then filled it with steaming broth water and handed it to him.

He started to speak, but could only cough.

“You don’t have to talk,” she whispered. She reached for her own threadbare blanket and draped it over his shoulders. “That’s the rule in this bond. No questions asked, and no answers needed. You’re homeless. You just share what you have and help as much as you can.”

He cradled the cup in shivering fingers and nodded.

Soon, her shift ended and she traded places with the next man. The new one was already asleep, curled before the fire, wrapped tightly in her blanket. She found a space on the floor and tugged her cloak around her. As she looked up at the dark chapel ceiling above her, more questions came. What am I afraid of? I’m NOT afraid! And what did he mean by renowned? This is about as far from renown as you can get! My guardsmen brothers have much more renown than this.

As a little girl, she had loved watching her brothers play at swords using only the wooden sticks they had in their Lord’s livery tool shack. She had wanted to jump in and play, too, but her brothers never allowed it. Girls don’t play with swords. She had practiced anyway, watching and learning. One by one, as they grew, they had enlisted into the city guard, while she was left behind.

What am I afraid of? What am I hiding from? Nothing! The city guard needs me! I don’t need them! I’ll show them all. There will be a day when they’ll know what they missed when they turned me away.

She tossed herself over and adjusted her cloak. I’ll show them renown. I may be nothing now, but when I get my earned name, this city will know me.

The winds whistled and moaned an empty song through the chapel’s broken windows.