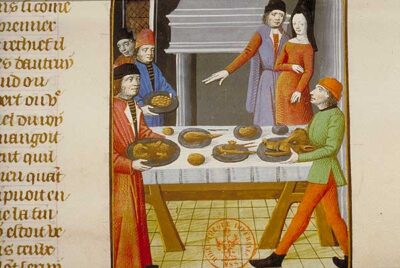 Serving the beggars in the chapel

The great wooden door of the chapel creaked open and a voice called out, “A good winter, a good winter, blessings to you all!”

Shylai’a heard shuffling feet and scattered startled voices as her own eyes opened. She raised herself up on one arm and wiped the bright morning sun out of her eyes. It shone in through the many broken windows along the east wall of the chapel, and through the open main door. A man in monk’s robes entered the chapel and stamped the deep snow from his boots.

“Bless your steps! Bless your steps” His breath misted before him and he gestured wide with open arms. He had a large pack slung over his shoulders, which he shrugged off after taking a few steps. Two others, women in heavy fur-lined cloaks, stepped in after him, each carrying large baskets of fruit, breads, and cold meats. The other beggars and homeless backed away from them, uncertain and untrusting.

Shylai’a stood and shifted to the side of the chapel. She wanted to be able to see what else might come through the door. Her hand sat at the ready on her sword hilt but still hidden under her cloak.

The ladies began spreading blankets on the dirty chapel floor while the brother opened his pack. “Welcome Winterfest!” he called out. “Join the feast!” He leaned over, helping the ladies lay out their food onto the blankets. He gestured to one of the younger beggars eyeing the breads hungrily. “Come, come! The church cares for the poor and the needy. Come, feast! It’s the first day of Winterfest!”

The others hesitated at first, but it didn’t take long for the cold and hunger to win out. Soon there was a small crowd around the blankets, and the three visitors had a hard time keeping up with the press. Shylai’a was suspicious, but just as hungry as all of the others. One of the ladies stepped back through the main door, and quickly returned with another large bag of food to lay before them.

The bread and meat tasted wonderful, and soothed Shylai’a’s hunger, but not her unease. These three visitors weren’t dressed in finery, and the monk’s habit was simple, but clean and made of well-spun wool. Even so, they were certainly better off than any of the beggars, and richer by a good deal than anyone in that neighborhood of the Outerwall. Why would they come out here to share so much food? What are they doing?

Beggars Singing in the Chapel

The beggars spread themselves around the chapel floor eating and laughing at their good fortune. While the brother continued serving, the ladies stood and began singing Winterfest carols. Before long, one of the beggars pulled a whistle out of his pocket and piped the song along with the singers. Others joined in the music, while still more jumped up and began dancing in a circle.

Sylai’a looked around the chapel, looking for what felt wrong. She couldn’t identify it, but everyone she had lived with here for the last four months was smiling and eating. Some were dancing, others singing and clapping. What’s wrong with me? Maybe I’m just too jaded, too cynical. Come on! It’s Winterfest, after all.

A motion to her left caught her glance, and she looked. The man who had come to them last night was moving away from the circle of reveling beggars. He stepped quietly toward a secondary doorway up by the altar. Now where’s he going?

He kept looking back over his shoulder as if to see if anyone were following him. Shylai’a stood up for a better view as a pair of dancers spun into her line of vision. The man paused at the door with his narrow gaze focused on the visitors at the feasting blankets, then slipped through the door and was gone. She set down her food and took a few steps toward him.

“Hear ye, everyone!” A stern voice behind her snapped her attention around. A man in a fine-cut red and white cloak posed himself with authority near the blankets of food. He had a well-polished hood of mail over his brown hair, and a thick wool scarf. His leather boots were a shined black. The cloak had a crest of heraldry that Shylai’a didn’t immediately recognize. The singers stopped immediately, and the music and dancers slowed to nothing a moment or two after. He’s a militia commander. Not the city guard, though. Who does he follow? What kind of leaf is that on his crest? Maple?

The commander stepped forward, gestured at a young man sitting on a stone, balancing a plate of food on his knees. “You’ll do.” He ordered, pointing in the direction of the main door, “Go wait over there.”

The ragged beggar shrugged away from the commander, unsure of his intentions. The commander wasted no time. “Stand up.” He grabbed the man by his ragged shirt shoulder and pulled him up, scattering his plate. The man backed away, his hands raised. The commander gestured, “Over there! You, too!” He pointed at another man, not as thin and a bit older.

Shylai’a’s shoulders and back tensed under her cloak. Her hand tensed on her sword hilt. Her brows dropped and her eyes narrowed. That’s what was missing. There’s the hidden motive. Feed us, sing with us, then press us into your militia.

The singing ladies and the monk moved to where the soldier had pointed, and gestured for the chosen men to join them there. The commander continued through the small group of the beggars bond picking out six or seven of the healthier-looking men to be directed to the lineup. As he did, he shouted, “You who have been selected are now soldiers for Her Honor The Marquess of Kaelig, loyal servant of King Hastonne III, of House Twynham, may he live long, and protect us all.”

“Who’s decreed this?” The murmur of startled voices rippled through the group.

“Marquess Kaelig has decreed it!” the commander barked, “Bands of hooligans and thugs run rampant! The Boar’s Head and the Oak Leaf are seizing ground in Twynne Rivers as we speak. Wizards attack the good folk doing business! How else can His Majesty keep the streets of our fair city safe?”

Shylai’a felt her face and neck get hot as her fists clenched. “Safe for who?” she shouted, stepping forward. “Who keeps us safe here in the Outerwall? Who keeps us safe from the Marquess?” The commander looked down into her face. Their eyes met, and studied each other. He thinks he can stomp in, throw some food and song in our face and order us all to his will? We’re not his slaves.

With a smirk, he turned to the others gathered by the door. “You’ll be housed in a warm barrack and fed daily.” The monk was punctuating each of the commanders points with a nod of his head. “You’ll even get wages! A silver or two each fortnight. I daresay that’s much better than what you’ll get begging or thieving or whatever it is you do here.”

Not by much! She sucked in a deep breath, then thought it over. But it is better. She was a bit surprised by her own reaction. Was she actually considering this? The arrogance of the man! But a warm barrack and meals… And hadn’t I been wanting to join the city guard? A few others stepped up and started toward the line. A woman grabbed a man’s sleeve and pulled at him. “No! No! Don’t leave me!”

He turned and whispered, “But I can start sending you my wages. You can get somewhere to live!”

The commander laughed. “Bring her along! We’ll make her a scullery maid.” The couple looked at each other and made for the line.

Shylai’a shut her eyes tight. Her shoulders slumped and she blew a hiss through her clenched teeth. She stepped up to the commander with an angry glare then walked over to the line.