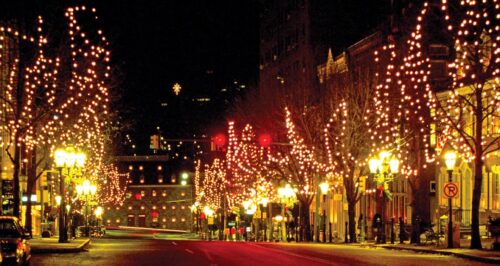 “If this is an elven party, then count me out.” Karendle mumbled. She sniffed her small red drink cautiously, sipped it, and made a face. She shifted her hips uncomfortably in the flowing skirt of the white and gold dress she wore. Next to her was a small round table, ornately decorated in streamers of white and light blue cloth, with a centerpiece of crystal cut into the shape of a snowflake. They were out on a terrace patio outside of a ballroom in the central city of Emberfire. Many vents of steam and heated air kept the terrace feeling comfortably warm, even though the evening light was dimming in the cloudy sky. Music was provided by elvish flutists and harpists in a corner, and it seemed like the whole of high elven nobility and their associates mingled.

“You don’t like parties?” Korr stood beside her, feeling equally awkward. The frills and ruffles of his own light blue shirt hung slightly open, revealing what he thought was too much of his thin, narrow chest. Below his shirt he wore a long wrap of cloth that he could only describe as a skirt. He had been told, however, that it was called a drape, and it was more like the bottom half of a robe. In fact, most of the high elf men there at the party wore something similar, but in different cuts and colors. It reminded him of the hakama that the other disciples had worn at the institute, so he had agreed to wear it. He felt it made him look even taller than usual. Since most of the elves he had met in Emberfire only came up to the level of his nose, some even to his sharp chin, he was quite conscious of his conspicuous height.

“I love parties,” Karendle corrected. “My family throws great parties.” She sipped again, but it was no better.

“Your family parties?” Parith stepped up to them. He, too, looked tense and uncomfortable in the fine clothing he’d been given. His smooth silk shirt was a darker color, a green.

“Oh, yeah, but not like this.” Karendle crossed her arms and twisted the end of her red braid in her fingers. “If this were my family, by now my cousin would be dancing on her table and my uncle would be hitting on my mom. My dad would have been celebrating because he’d have won at least three silver on his bet when she punched my uncle cold. Dwarves know how to party.”

Parith laughed and raised his small glass to her. She clinked her glass into his and they both sipped.

Korr looked across the large open patio. Many high elves floated by in between the serving tables and a dais on the opposite side. Several of the elves on the dais wore sashes and medallions with symbols that Korr could barely see, much less recognize. He guessed by the bustle around them that they were probably very important in the society of Emberfire City.

Korr saw Jaxil and his wife, with Thissraelle and Eddiwarth standing near. Looking over everyone’s heads made them a little easier to spot as they mingled and interacted with others on the floor. Eddiwarth looks like he’s not doing so well at this, either. Thissraelle kept tugging at his hand and introducing him to others. He would nod and smile, but Korr could see the look of befuddlement on his face.

Korr noticed that Jaxil kept working his way closer and closer to the dais. He pointed that odd effort out to Parith and Karendle. “Why is he doing that?”

Parith chortled. “The elves up on the stand, with the fancier sashes and finer chains are important here in Emberfire. I think the color and laces on their sashes have something to do with how much oomph you have.” He puffed out his chest and tapped it with his open palm when he said that, adding emphasis.

“I think he means power; value; rank,” Karendle clarified, “If you have it, you’re a bigger deal in the city. Look, there. Thissraelle’s parents are trying to use her to get more of it.”

“But Eddiwarth, on the other hand, definitely does not have oomph.” Parith offered.

Karendle sipped. “No, he definitely doesn’t.” The two smiled and clinked their small cups together again.

After a moment’s thought, Korr mused, “No one here seems to be too interested in meeting us, either.” He tasted his drink. It was extremely sweet, with only a slight acidic tang. “So I guess that we also don’t have much of the oomph.”

Before Parith or Karendle could react, a line of great dragons rushed through the fading daylight overhead. The musicians stopped and the partiers shouted and shrieked. Korr froze for a heartbeat. His heart and breathing stopped. He forced his hand to move, to break his icy fear, and tossed his drink onto the nearby table. It clattered and rolled, leaving a short line of wine on the linen. His feet fell immediately into stone stance; feet apart, knees bent fists ready. It took Korr a moment to realize that the noises from those around him were not screams of terror, but cheers of applause.

The line of dragons curved in the air above the city, looping back around for another pass. The line included dragons of many different sizes and colors. They were a bit smaller than those they had fought at the mountain shrine when they met Heathrax, but much larger than the drakes that had attacked the cathedral As they split off into two wing group formations, Korr saw a rider in an ornate saddle tied just ahead of the wing shoulders. Each carried a long staff with a hook, decorated with long streamers of white, blue and silver.

More cheering erupted from over the walls to Korr’s left and right. Apparently, other parties in other terraces were also enjoying the display. Korr’s muscles relaxed as a crowd of elven revelers streamed out of the ballroom doors onto the patio to see.

The two wing groups climbed upward and with a loud synchronized roar from the beasts, turned back toward each other, skillfully arching in the air in an elaborate dance of flight. As the two wings crossed paths again, each dragon, in turn, prompted by its rider, tossed its head up and spat a long column of bright flame into the air.

The elves in the festival erupted into cheering and applause, but Karendle, Parith, and Korr just looked at each other, then back up at the circling flight.

“I may be mistaken,” Korr said, “but I seem to remember that Heathrax said that dragons don’t like to be ridden.” The other two slowly nodded. “And here these ones seem to be driven by the riders.”