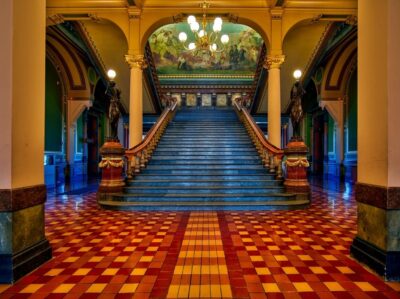 Korr followed quickly after Parith as the elf marched down the long hall from the terrace ballroom, his tamlan flowing wide with each emphatic step. Korr ran to one of the servants to ask him to retrieve their cloaks. “Parith! Wait!”

Parith stopped, but did not turn around. He just stood with his arms crossed, leaning slightly on one hip, breathing quickly. “Reunification…” he muttered to himself.

The servant brought out the cloaks. Korr thanked him with a nod and handed one to Parith. As Korr swung his cloak around his shoulders, Parith tucked his under his arm and resumed walking, a bit slower, but with no less determination. “A ‘Reunification Initiative’ is just fancy diplomatic speak for a conquering invasion. Did you hear him going on and on about ‘bringing enlightenment and civilization’ to ‘our good brothers in the forest’?”

They crossed the main foyer of the Palace of Arts, toward the main entrance, sliding between clusters of celebrating high elves either arriving or leaving their parties. Sounds of footsteps and conversation echoed through the high emptiness in the stone chamber. It was brightly lit, and festive, but still empty. As they moved across the polished stone floors, Korr swept his cloak over his shoulders. He was still getting used to walking in the drape.

They paused before the doors. Parith sighed and dropped his gaze. Korr waited with ever lessening patience. He sensed something was troubling Parith.

His friend took in a deep breath, then blew it out. “Korr, I’ve got to get out of here.”

“Yes, as do I.” Korr nodded, looking around the foyer. “Let’s take a ridercart back to our place in the Jaxil home.”

“No, I mean Emberfire. I’ve got to get away from…” he gestured around him, “from all this. Eddiwarth, Thissraelle, Karendle, they’re all great friends, but I can’t stay here.” Parith looked up at Korr, as though studying his face, hoping for a response.

“I understood you clearly.” He opened one of the big double doors and they moved out into the cold night air. A light snow was starting to fall. “The task I carried when we first met is done, now. I’m not sure just how well it was done, but it is done.”

Parith started down the long and ornate stairs at the front of the palace. People were coming up and walking down to the street level below. “Didn’t you find Heathrax and deliver the message from your master? I thought that was your task?”

Korr followed. “Yes, and now I have to return to the school and report on my quest. If my work was deemed worthy, I advance to the next rank in training. So, before long, I will also need to leave.”

“I think,” Parith hesitated, “I think I want to go find this giant, Granthurg. He probably doesn’t know as much about the dagger as we do.”

Korr narrowed his eyes, fixated on one of the ridercart carriages waiting on the street under the oculus lamps. A tall man in a dark cloak stood beside a shorter, more rotund man, both human. The shorter man was talking with the ridercart driver, who then climbed into the raised seat above the larger rear wheel. He situated himself, and placed his hand on an oculus mounted before him. It began glowing and the vehicle lurched a bit. The plump man turned around and addressed the one in the cloak, making quick hand gestures. The hooded cloak looked oddly familiar to Korr.

Man in a dark cloak

Parith continued, “I figure that if we find the dagger, we can find out who else wants it–”

“That man down there, in black.” Korr pointed.

“I don’t know.” Korr studied him. The plump one stepped up into the ridercart. The driver moved his palm over the oculus and they rolled away into the street. As the dark cloaked man turned around and walked away, the light of nearby decorations shined under his hood. Korr shivered with recognition. He’s the one who stopped us on the bridge to the shrine. He’s the one I fought. He’s the one that poisoned me.

Images of the fight rushed through his mind in a chaotic mess. It had been a scant few weeks ago and the memories still burned in him. He saw the bridge and the shrine on the mountainside, the broken fountains, the dragons rushing overhead as they attacked, retching out flames. Korr had attacked one of the dragons, but what could mere hands do to dragon scales?

This man was there, too, leading the beasts. Korr had seen him and rushed to engage him. The man’s face was shaped like a human, but covered in dark scales, like a dragon’s skin. Korr could see the man lying in the snow at his feet, his eyes more like a snake’s than a human’s. Korr had held the spear at the man’s throat, but he remembered the burning pain of the man’s toxic dagger in his gut. I killed him. I know I killed him. I drove his own spear into him. How can he be alive?

Korr took off running down the steps, his drape flapping with each step.

“Korr!” Parith yelled. “Where are you going?”

Korr reached the bottom of the steps to the large stone landing where people were getting into and out of the ridercarts. He took off up the street in the direction the man had gone.

Parith ran behind him. “What are you doing?”

Korr paused long enough to explain, “The man in that dark cloak was the man I fought on the bridge.”

“Yes.” Korr took off in a dead sprint. His mind was focused on the shadow of the man walking way ahead of him under the colors of the Winterfest lamps. Questions drove his legs in spite of the tamlan. Why did he attack us? Why did he try to kill me? Why is he not dead? I must not lose sight of him!

The dark cloak passed into the mist of a roadside steam vent. When Korr burst through the fog, the street beyond was unlit, and unoccupied. Where is he? He could be anywhere! Korr dropped his feet into a solid square stance and swept his arms and fists into a defensive posture, then turned slowly around on his bent knees.

“I see him!” A voice from above shouted. Parith ran along the top of the stone wall to his left. He pointed further up the street as he jumped over a gate. Korr leapt forward into a run, following the gradual turn of the road. He saw the quick motion of a shadowy figure up ahead. Glancing up, he saw Parith nearing their quarry.

The hooded figure glanced around and broke away running, but Parith jumped down from the wall in his path. He stopped and screamed, but it was a high, piercing scream, like a woman’s voice. Korr saw Parith freeze with surprise on the walkway. The figure spun to run away from him, and the hood fell, revealing a light-haired high elven woman with terror in her eyes. Korr scrambled to stop as she held out her hands. “Take what you want, but don’t hurt me, please!”

Korr backed away, also showing his hands. “I’m sorry, m’lady, we thought you were a murderer.” Her cloak was also dark, but had bright white trim, and there were white tassels hanging from the end of the hood. Where did we lose him?

“A murderer!” she shrieked, “You’re the murderers! Help! Help!”

“No, please! Don’t shout! We will leave you be.” He continued to back away.

“Here! Take this!” Parith shouted, tossing a pouch at her. It clinked as she caught it. While she was distracted, Parith dashed across the street, calling, “This way!” Korr followed and they jumped onto the rooftops of the buildings the next city level down the mountainside, leaving the confused elven lady standing and wondering what had just happened.

After a moment, she looked in the pouch and counted the coins.