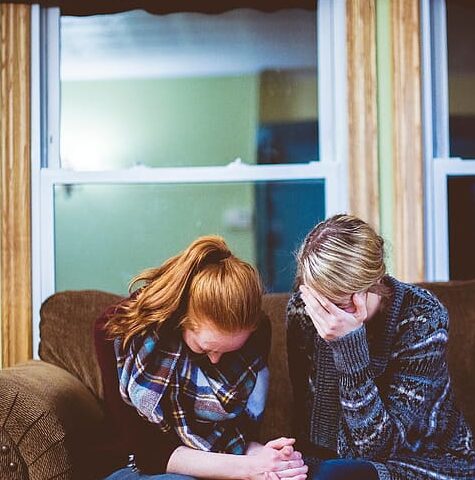 The flames burned hot and steady on the hearth in the Jaxil family library. By contrast, hard winds blew heavy snow past the panes of the two arched windows. Two oculus lamps filled the hall with an even and relaxing glow, making shadows behind the few rows of bookshelves.

Eddiwarth lay on his back on the large soft couch before the fire. His knees rested on pillows and his feet hung out over the armrest. He shifted his shoulders and settled his head comfortably into Thissraelle’s cross-legged lap. She stared at the fire, absently stroking his curly hair, cascading over her legs.

She looked out the window. “It looks like we got back just in time. That’s a nasty storm.”

“Hmm?” He mumbled, “yeah, one of the servants said that a storm like this one so high up the mountain could drop a couple of feet of snow before it’s done.”

“I can’t even imagine,” she wondered, “It was never like that growing up down in Twynne Rivers. There are a lot of things strange up here in Emberfire.”

He nodded, and she continued, “It’s like I’m home, but only visiting. I mean, we’re elves, right? This is our city, right? But it’s all so foreign to me. I hardly knew any other elves as a child. Some would come in and out of the Wizard’s Guild, but it was mostly humans, either students or full guild members. Were you there long?”

“I was thirteen winters old when my father got me into the guild school. I still don’t know how he managed to make it happen.” I know why, though. He was tired of cleaning up after me and my mistakes. It was fine with me. I got tired of all the yelling and cursing. Even in the guild school Eddiwarth had constantly been in trouble. The curriculum of intense, focused study was difficult, and he had preferred to practice magic by pranking the others. It had started with little bits of fire, but once he had learned to make illusions with his mind, trouble really started.

“It’s funny that I never saw you. Of course, I wasn’t allowed to interact with the students directly. I was sheltered separately.” She twirled his long, curly hair in her fingers. “Yet, here we are now.” She glanced down at him and smiled.

I doubt they would have let you near me, anyway. I’m surprised they let me volunteer to search for you when you left. “Why did you leave? It would seem to me that daughter of the Guildmaster would have been a pretty cushy life.”

“Cushy, yes, and suffocating, too.” She mused, “I always wanted to journey, to come here, to Emberfire, to know my heritage, my people, but…”

“But now that I’m here, I guess I don’t really fit in. It’s not at all like I imagined. I don’t know anyone, I don’t know the city, and everyone is… I don’t know how to describe it. Distant? Aloof?”

“Maybe that’s just the people your dad is introducing you to.”

She nodded, “Mmmhmmm. I…,” she sighed. “I feel more at home with Heathrax than even my own family.”

“What about my family?” She leaned back a little and lightly smacked his forehead.

“Yes, you should. What did you mean by that?”

“Nothing!” He stammered, “I love your family.”

She shoved his shoulder and laughed. “Now that’s a flaming lie!”

“I’m trying to. I really am. They’re not making it easy. It’s not like they’re showing me any love.”

“Well, they welcomed you into their home…”

He sat up and leaned on his knees. “That was just to favor you.” Thissraelle’s eyes flared and her shoulders squared back. He continued, “Maybe if I didn’t have the dark curly hair or my ears were pointier…”

“Oh, come on, Thiss, remember the parties last week? He introduced you to everyone, from the ministers to the royalty. He even introduced you to the servants. I was right there beside you. You were holding my hand and he still only mentioned my name, what, maybe twice?”

Eddiwarth deepened his voice with a mocking tone, “‘I’d like you to meet my daughter, Thissraelle Dragonfriend’. I wonder what Heathrax would say to your dad for using his name. It sure impressed everyone there. I noticed your mother made particular effort to present you to the handsome white-haired sons of the elite. Maybe hopefully one of them could pull you away from this short-eared half-blood.”

“Eddiw-“ she choked and stood up. “I don’t- How could you think-“ she backed away, her hand to her face, trying to cover the tears spilling out.

He stood, but she stepped farther away, finally spinning and fleeting the library.

“Thissraelle!” Eddiwarth stepped and called after her. He ran his hands through his hair and dropped his head with a sigh.

Shaking stones! I am such a flaming idiot!