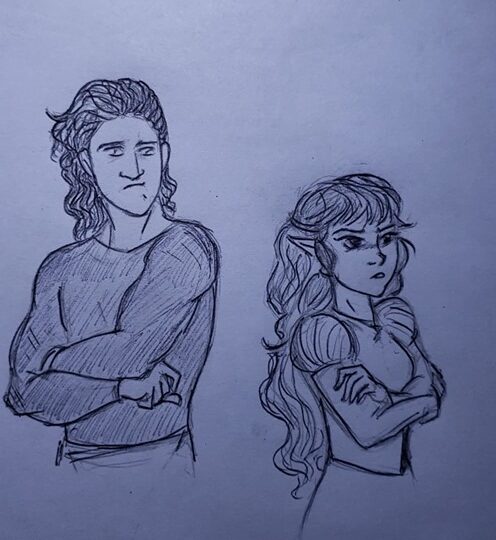 “What are you doing out here?” That was Karendle’s voice asking the question. It sounded muffled in the heavy cascading snow. Eddiwarth didn’t turn around.

“It’s cold!” Parith stepped up to Eddiwarth’s side. “Are you wanting to get buried?” They stood, leaning against the elaborate stone railing of House Jaxil terrace. Had the storm not been blowing, they would have been looking out over an expanse of houses, paths, ramps and stairs built down the side of the mountain. As it was, it was hard even to see the lights from the windows in the level below. Karendle followed Parith to Eddiwarth’s other side.

Eddiwarth shook his cloak and looked back and forth between them. “Is this an intervention?” He smirked and chuckled at his own joke. The other two of them were silent, unsure what to say.. Eddiwarth sighed and shook the snow out of his hair. “No matter. I’m standing out in the cold because I’m stupid.”

“Oh. Is that all?” Parith nodded relief. “I could have told you that inside where it’s warm.”

“Yes. Yes, you could. Thank you.” Eddiwarth just looked out over the railing into the snowy dark.

Karendle leaned back to frown at Parith, who shrugged. He nodded for her to continue, but she shook her head. Parith furrowed his brow and gestured a nod toward Eddiwarth. Karendle coughed, “So, what’s wrong? You’ve been, ah, really gloomy lately.”

“Like I said, I’m an idiot.” Eddiwarth dropped his head. “Sometimes I lose control and I let things out before I realize I’m saying them.”

Parish nodded. “That”ll cause problems, for sure.”

“I know!” Karendle said, “Why can’t people just say what’s on their mind? Don’t hold it in! Let it all out, I always say. If people can’t handle the truth, that’s their own problem!” She looked up to see Eddiwarth and Parith both staring at her through the falling flakes.

Karendle pointed across Eddiwarth’s back. “Hey, it was your idea to come out here and help him.”

“Look friends,” Eddiwarth interrupted, “Thank you very much. I appreciate what you’re trying to do, but you really can’t help at the moment. I just… Really I just need to go find Thissraelle.” He turned, his feet crunching in the snow, and walked toward the door.

“What are you going to say?” Parith sounded a little worried.

I’m worried, too, frankly. “I don’t know. Whatever it is, it will probably be said while groveling.”

“She’s in her room,” Karendle interjected. When he paused and looked back, she shrugged, a bit embarrassed. “I checked on her earlier. She, ah… she told me everything.” Eddiwarth nodded and stepped through the door, shaking the snow off his shoulders.