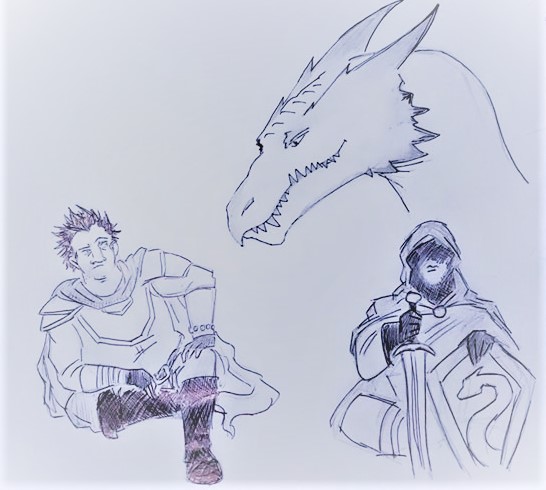 He understood the need for it, the science behind it, and the steady advancement of the seasons that brought it each year. But those facts didn’t mean he had to actually like it.

Tonklyn stood before two tall glass doors. One usually nice feature of the bedroom in this suite of rooms was that these doors opened out onto a very spacious balcony, looking out over the slope of Emberfire City. On a clear day, one could normally see out over the Umbrawood forest, and on a good night, the glistening lights of the city were almost as beautiful as the sweep of stars in the sky beyond.

Tonight however, there was none of that beauty. He was not even able to open the doors for the two and a half feet of snow piled on the floor of the balcony on the other side of the glass. He was only able to stand and watch the balcony fill with more and more snow. There was a wisp of a draft from the slightly incomplete fit of the doors. The cool air passing his face contrasted with the radiant heat from the dancing fireplace to his right.

He especially hated when there was so much of it. It made it hard to move around in the city, hard to get things done. He had spent quite a bit of time trying to insinuate himself into the high elf ruling class as a visiting envoy of a foreign king. That was true enough, but he still carried his secrets.

The more time I have to spend sitting around snowed in, the more time there is for these flaming elves to figure out who I really am and what I really need to do here.

And they will definitely not be happy on the day that they find out.

The dark cloaked figure of the mute dragonbonded soldier stepped up beside him, startling him with a jolt.

“I really hate it when you do that.” Tonklyn muttered. “I’m going to get you a bell and hang it around your neck.” He made a gesture as though he were tightening a strand around his own throat.

The man said nothing, as always, but stood, looking directly at Tonklyn in a way that made him shiver. Tonklyn saw the man’s eyes glaze over with a now-familiar distance. Tonklyn understood the meaning. His Majesty Kirraxal the First, the Dragon King, would be using the man to contact Tonklyn. Supposedly, it used less magical will than reaching out across the miles through shadow alone. Either way, Tonklyn felt tension in his shoulders, an edge of fear. It was always there whenever he interacted with his liege lord. No matter how long he had served, the feeling remained. “I suppose it’s time to report in.”

Tonklyn stepped back as the dragonbonded’s eyes slipped shut. The soldier’s head rolled back and his shoulders slumped. A dark mist began to form around him, rising up from the faint dancing shadows his legs cast on the carpet. The mist swept up around him, overwhelming him in darkness. The black began to take form, shaping into the snarling horned head of a dragon. It continued growing, forming a snaking neck, a muscular scaled chest, and fading into a hazy insinuation of hands and claws. The neck flexed and the head turned to face Tonklyn, who awkwardly dropped his hefty body to one knee and bowed his head. The ghostly lips hissed, then spoke.

“Good Evening, Chancellor. I’m hoping you have some good news.”

Tonklyn raised his head before the apparition. “Yes, of course, Your Majesty. Progress is steady here in Emberfire.”

The dragon humphed out a cloud of shadowy smoke which wafted across Tonklyn’s face. “Progress. Steady. ‘Pieces are falling into place’. I’m getting tired of all of this. When will I see results?”

Tonklyn inched back and turned his head. He knew the smoke was unreal, a magical projection, but it bothered him just the same.

“The snow this winter is harsh and heavy. Moving around in the mountainous city is very difficult.”

“The fools in Twynne Rivers are telling me the same thing. The dragonbonded there has informed me that our acolytes have traced the dagger to a team of giantish riverrunners, but they refuse to pursue the story. They claim the ice floes in the river have shut down the barges.”

That’s good. Tonklyn smiled. Giantish riverrunners. I was told there was a bystander giant that fought when the cathedrals were attacked. There might be a connection. I’ve got to find the dagger before anyone else. Tonklyn hated the competition as much as he hated the snow. He hated waiting around almost as much as Kirraxal.

For now, he carried ahead with his report. “In spite of the cold, I have made inroads into the dragon keepers here in Emberfire. When the time comes it will be easy to turn the dragons on their masters. I am certain that when they take their freedom, they will serve you well, Your Majesty.”

“That is good news.”

“And, I’m meeting with a member of the Elven High Council. I think he will be amenable to the idea of taking advantage of the chaos. They might be convinced to attack Umbrawood openly. If they do, that will present an excellent opportunity to turn the dragons on their masters. Then, with the wood elves and the high elves in full-on war, they won’t be able to respond when we bring down King Twynnham in Twynne Rivers.”

The dragon raised his head.

“Then,” Tonklyn continued, “the elven lands will fall. From there, the dwarves in the eastern and western mountains will not dare resist. You will be fully recognized as the Kirraxal the First. The conquest of a broken land will be simple. The people will cheer to have a strong ruler as their protector in the chaos. By this time next year, you will rule all of Wynne.”

“So you keep saying.” The dragon paused, then leaned in close. “Just make sure it happens. I grow tired of waiting.” The shadowy mists began to dissipate.

“Of course, Your Majesty.” Tonklyn shrugged. “Of course.” Tonklyn turned his back on the dragonbonded soldier now regaining his posture. The snow continued to pile up against the glass of the door. Tonklyn tried to roll the stress out of his shoulders and shook off the chill of the drafty air.