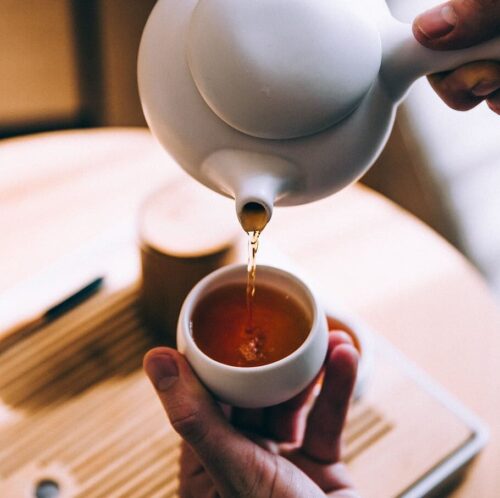 The snows in Umbrawood Forest had finally eased after weeks of nearly constant storms. Sometimes steady flurries, other times harsh blizzard winds, the snows had sat heavy on the tree branches of Illariel’s elevated home. She, along with her brothers and father, had spent most of the morning pushing the last of the most recent snowfall off of their porches. They had also swept off the branches that held their small home high up in the trees, next to all the others in the town of Treehaven.

Now she sat with them on the soft woven rug by her family’s hearth, feeling the gentle swaying of the house with the wind. Her hot dragon’s drop tea had a deep red color and a sharp spicy taste. She held the cup tight in both hands, letting it warm her fingertips. The steam wafted up into her nose, carrying the tangy smell of the flower that gave it the name and flavor.

“Bleaaah,” her youngest brother whined, lying on his tummy next to her and wrinkling the rug. “How can you drink that stuff? It’s disgusting!”

“It burns your tongue!”

“It warms me up inside.”

“Maybe if you smother it in honey.” He made a nasty face.

“That would ruin it.” She wrinkled her nose at him. “Maybe I drink it because I know you won’t steal it!”

The door from the family great room to the porches swung open and a frigid breeze flowed through the house. Illariel and her brothers spun to see what had opened it. An older lady stood in the doorway, her hair and cloak billowing inward with the wind.

“Gre’mama!” the brothers both shouted and rushed to embrace the smiling lady.

“Who’s letting in the cold?” Her dad’s voice sounded from another room.

Illariel’s mother rushed over. “Mama, what a surprise! You shouldn’t have come through the snow! Boys, let Gre’mama sit down.”

“Nonsense! I’m fine!” Gre’mama shuffled over to one of the low round chairs against the wall.

“Here, I’ll get you one.” Illariel rushed to the nearest chair and, rocking it side to side, moved it over to the hearth. Her father came back into the room and closed the door. He also embraced Gre’mama. “Welcome! It’s good to see you!”

“It’s good to see you, too. Good to see you all. I don’t like it when the snows keep me so isolated. But this is nothing. When I was a little leaf, the blizzards were legendary.”

The youngest boy rolled his eyes. “When you were a little leaf, EVERYTHING was legendary…”

Illariel and her mother helped Gre’mama down into one of the chairs. They were like padded shallow bowls ornately carved out of wood with a cushion pad of green fabric inside. One side of the bowl was slightly higher to support her when she leaned back. They rocked gently with the room as the breezes gently blew on the hometree. Gre’mama settled into one and crossed her feet up under her knees. Illariel asked, “Would you like some dragon drop tea?”

“I know how you like it!” Illariel rushed off to fetch a cup.

“Actually, you’re the reason I came over,” Gre’mama said, over her shoulder. One of the brothers pulled another chair over and sat in it. “Would you be a sweet leaf and let your sister sit there?” He sighed and rolled his eyes, but climbed out. Illariel brought over a steaming cup of smooth wood, passed it to her Gr’mama, and sat down, crossing her legs in the bowl.

“Now, dear, I’ve wanted to hear all about your time in the forest. Dame Withree told me what you told her, but I wanted to hear about it right from you.” She sipped and smacked her lips. “Oh, that’s strong! Mm-hmm!”

Illariel smiled and sipped her own cup, feeling it’s warmth in her belly. “What do you want to know?”

“Well, she said you were attacked by a spider!”

“Well, I found one, and I thought she was huge. The biggest I’d ever seen. But she was hurt, and I healed her. The she showed me her mom and her mom was really huge, I mean giganticly hugely big.”

“Did she attack you?”

“No,” Illariel hung her head, “she was curled up dead. There had been a big fight with high elves, and the little spider’s whole family had been killed. I kinda don’t like to think about it.”

Illariel sipped again. “Maybe if I’d gotten there sooner or heard the fight…”

Gre’mama rested her hand on Illariel’s knee. “You’re such a tender soul, but if that had happened, you probably would have been killed along with them. I’m also sad that they were killed, but I’m glad that you weren’t.”

“I agree!” Illariel’s mother called in from the cooking space. “It always scares me when you go out away from the village. There are monsters out there! And now high elves, too!”

Gre’mama looked back at Illariel. “So which one attacked? Withree said one of them attacked you.”

Illariel nodded. Withree was a great teacher, and a wise and wonderful lady, but she could NOT keep quiet.

“A really big one showed up, a man, probably, and he…” she glanced up at her mom, “ah, he got a bit aggressive, but the baby calmed him down.”

“That was a cool thing about them! They talked with smells! It was the weirdest, greatest thing ever!” Illariel straightened in her chair and leaned forward, rocking it back and forth. She grabbed her Gre’mama’s arm. “It was like I could smell their feelings! Fear, anger, hope…,” she paused, remembering, “and even gratitude.”

“So, they were intelligent?”

“Oh, yes! Very! As we walked back to Treehaven, the young one kept chittering and jumping. She somehow managed to convince the big one to carry me as a rider. That was a strange experience. Their eyes, all of them look very… very wise.”

Gre’mama set her now empty teacup down and leaned back in the chair. “Since I first heard your story, I looked in our lorebooks. In the far eastern branches of the forest, there are great spiders who are large and vicious predators. If a big deer buck wanders into their webs, they’ll bring him down whole and drain him dry. They’re hungry and aggressive beasts, with no brains but for feeding.”

Illariel’s eyes got big with surprise and fear.

Gre’mama continued, “But the ones you met, it seems, are probably a different kind. These are a folk as smart and wise as you or I, maybe more so. They’re named the Lofren. The humans called them Arachins. They are much more rare, or at least better hidden. They jump from tree to tree to catch their meals, rather than waiting for something to tangle itself into a web. No elves have seen any in years. I thought they were gone, killed off. I wonder if they were just driven away from the parts of the forest we’ve settled in.”

“If they are that wise,” Illariel mused, “then it’s sad that we’ve driven them away.”

“True. True. But then, never let it be said that we are always that wise, either, eh?” Gre’mama shifted, wanting to stand. “Speaking of which, as I was in the archives, I was told that the Mayor and the council wanted to talk to you, too, now that the snows have calmed. They’ll probably summon you soon.”

Gre’mama nodded, looking up behind her. “Miravell, can I stay for dinner?”