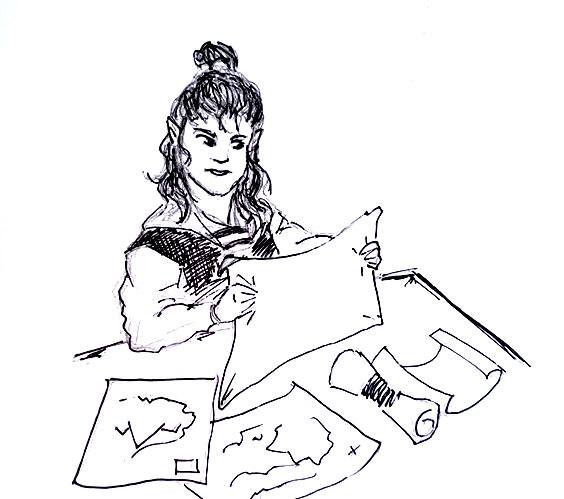 “They were spies! They must have been!” Illariel heard a gruff voice say as the wood elven guard swung open the large wooden door of the Heartwood Treehall. “There were two high elves among them. And a Dwarf! They must have been scouting our defenses!”

“One of our own was with them. What was his name? Laren?” Another voice asked.

“But if they were spies, why were they attacked?” More voices joined in, layering over the others.

“Perhaps as a ruse to cover their real purpose.”

“Illariel! Good child! Welcome!” The Mayor of Treehaven leapt from his chair, leaving it rocking side to side on the floor. He strode around the ring of people seated before a large, low table strewn with papers and maps. His hair was a dark brown with many gray streaks, and his eyes were bright and cheery in spite of, or maybe because of, all the wrinkles around them. He wore a simple tunic under a more formal jacket, with silver leaves for buttons and trim.

Illariel hesitated in the doorway, her long brown hair loosely blowing over her shoulder with the draft. In spite of wearing her finest skirt and blouse and spending much of the morning combing out her hair and bathing, she felt seriously underdressed as she looked around the room at the finely uniformed and ornately robed men. She only recognized three of them, the mayor and his two ministers, and knew only the mayor by name. He took her hand in a friendly greeting. “Wellmet! Wellmet! How is your father? And your dear grandmother?”

Before she could reply, one of the ministers snapped, “Get inside and close the door!” She saw him trying to hold papers in place so the breeze wouldn’t scatter them. Well, I wonder who shook his branches this morning…

Nonetheless, she hurried forward and stepped aside so as to be out of the way of the swinging door. She smoothed her skirt and bowed to the men around the table. The mayor presented her to the council and introduced them: majors in the army, mayors of two nearby villages, and of course, Treehaven’s own ministers. She nodded and bowed to each one, and knelt beside the table as they indicated. At a gesture from the mayor, another young girl ran to fetch her a steaming cup of tea. The girl was Illariel’s age and smiled nervously. Illariel recognized her from one of the Winterfest parties they had attended.

“Now, lass, don’t be scared, we simply have a few questions for you,” one of the army majors was speaking while another one shuffled some papers and spread a large map before her.  The first one continued, “about your recent… ah… experience in the forest.” She looked up at him. His coat was sharply pressed, trimmed in golden threads, with vines stitched around the arms. His coat had more vines than anyone else’s and he wore a chain around his neck with many tokens of battles, achievements, and awards. Illariel had already forgotten his name.

He spoke again. “Look at this map.” He pointed. “Can you tell us where you saw the high elves?”

She hesitated, then leaned forward and looked over the map. It was clearly old, and very ornately drawn, with a very artistic hand. What’s this? She traced a line with her hand. That’s odd…

One of the other mayors interjected, “Do you understand maps, child?”

She drew her brows together in confusion. This isn’t right, is it? Wait… she turned the map on the table. She looked up and glanced out the window. If we’re in the Treehaven Heartwood tree, then the mountains…

She leaned across the map and pushed it in a circle with both hands, flipping it around and back a few times before finally settling it where she wanted it.

“Do you know how to use them?” The mayor asked again. A major gestured for him to hold. “But she’s got it turned upside down! How can she read it?”

She traced a line drawn on the map with her finger. This makes no sense. What is this line?

“This isn’t accurate,” she interrupted.

The men all held their breath, stunned for a moment, then, one said, “What?”

They looked back and forth at each other. Treehaven’s mayor stepped over to her and put a hand on her shoulder, “Perhaps,” he offered, “if I were to…” he began to turn the map.

She quickly slapped her hand down on it to hold it in place. “See, if these are the Emberfire mountains,” she pointed to an elegantly drawn line of pointed angles on the map, “then they would be here.” She looked up and pointed out the northern window, “There!”

She continued, pointing back down to a spot on the map, “This is Treehaven, right? Where we are. If that’s correct, then, these streams should actually be over here, and Oakhome should be down here, and not over there.” She pointed to the spots as she spoke of them.  She traced her finger away from the villages. “I was in this grove here when I found the high elven tracks. And the skirmish where they killed the Arachins would have been close, probably right about… here.” She dropped her finger with a definitive push and looked up into the stunned faces of the men around the table.

“What?” She suddenly felt very self-conscious.

The major who had first questioned her took a breath, then reached across the map with a long leafquill. He dipped it in a small bowl on the table, and marked that spot with a small red circle. She leaned back and looked across the rest of the map, suddenly noticing seven or eight more circles along the lines of the Emberfire mountains.

“And how many high elves did you see there?”

Are all of these circles skirmishes? That’s a lot! They’re everywhere! “Huh? Oh, I didn’t see any. Live ones, anyway. There were a few bodies scattered around that the spiders had killed before they were…” She choked a little, remembering. “They were…” Her mind jumped forward and back. Hold on a minute. This isn’t about just a few little fights, is it? This is a bigger deal. There’s something going on. Wait! They were talking about Thissraelle! And Parith! Spies?

The men leaned over the map, tilting their chairs and filling the room with plans and defenses and troop movements. Illariel leaned back on her heels. That can’t be. They’re my friends! They weren’t spies, were they? No!

A hand on her shoulder made her look up into the kindly eyes of her Lord Mayor. He offered his hand to steady her as she stood, then turned her toward the door. “Thank you so much for your help. Give my best to your family.”

Were they? They couldn’t have been!