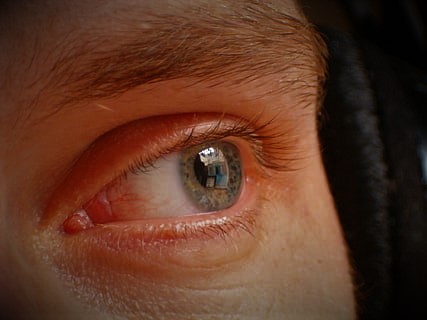 The cold nighttime streets of Emberfire City were a muffled quiet except for the “tak, tak, tak” of Parith’s wooden walking staff. The street was narrow, like it had been cut between high stone buildings, mostly homes, that were connected with walls and fences. There weren’t many oculi illuminating the way, as this was more of a residential area, rather than a plaza or bazaar, and not the wealthier levels of the central city, higher up the mountain. Still, it was a clear night, and the moon had waxed a bit beyond half, and so he could see well enough without the gem’s light.

He sniffed in the crisp air of the winter. The nights in recent weeks hadn’t been quite so cold as it had been right after Winterfest, and it had been a while since any new snow had fallen. The hot vents were keeping the streets pretty clear, at least in this part of the city, but there were still some significant drifts on the rooftops. Heavy icicles dangled from most of the overhangs, creating an almost magical glistening in the moonlight.

Emberfire City was a very different place than Twynne Rivers had been. Aside from the mountainside topography and the altitude, the people themselves were different. To see anyone but a full-blooded high elf here was rare. Even then, seeing a wood elf was even more so. In Twynne Rivers, it was mostly humans, but there was a big mix of everyone, especially in the Outerwall slums and in the Waterfront Quarter. He’d seen elves of all kinds, giants, dwarves, and he’d even encountered a felisian or two. It was pretty easy to blend in. By comparison, he felt obvious and isolated here among the high elves.

As he moved along the street, he wasn’t sneaking, but he didn’t want to be seen, either. At least, he didn’t want to be noticed or recognized. He hugged the shadows of the walls as he crept, quickening his pace past windows and doorways.. This part of town was asleep, but there were still patrols and occasional people awake. The city center above would be wide awake, partying well into the night. The slums below him never slept. Here, in the mid-city levels, it was sometimes easier to hide.

He had found both Twynne Rivers and Emberfire City to be even more different compared to Treehaven, his birthplace. Treehaven was a town, not really a city, but it had its own bustle. Homes, bungalows, and shops were all built high up in the trees, in their interlaced branches. They were all connected with walkways, bridges, and ramps. It was an entirely different feeling than the flat of Twynne Rivers or the slopes and incuts of Emberfire. There was a sense, and a scent, of life and motion in the air.

A breeze swirled up the unnatural ravine the street had cut between the buildings, billowing Parith’s cloak and tossing his hair. Parith paused, sniffing. Something smells off. He felt a chill, not of the cold but of nerves. Life in the forest had taught him to always pay attention to the smells.

He pulled his hood further over his head and glanced back over his shoulder. Nothing. Just the empty street. But I’m sure I smelled something, maybe someone… different, but almost familiar.

His senses perked up. He resumed walking, but cautiously. He began to step more on his toes, with his knees slightly flexed. It was a natural response to danger he had learned as a child in the forest. A few houses passed, and he sniffed again. There it is. I’m definitely being followed. He tried to shake off the tension in his shoulders.

He looked up ahead. The road had a gradual but steady curve that made it hard to see too far ahead in the shadow. As he walked, he saw an alley that branched off from the street he was taking. He checked the smell once more. Now that he had noticed the scent, it was much easier to catch. That, and it was clearly getting closer. Why can’t I hear him?

He jumped into the alley. It was narrow, and the shadows made it much darker than the street he’d been walking on. There were some crates and barrels not too far ahead, and it was hard to see much beyond them. It didn’t look very deep. The musty smells of the alley temporarily overpowered any scents coming from the follower. The dark alley’s canyon shape also kept the breezes out.  I could get trapped and there’s not much room here. He looked up at the overhangs and rooflines. I’ll have to go high instead.

He lunged ahead and sprang off the top of one of the crates, launching himself up and across the alleyway. He grabbed onto a window ledge, then pulled his legs up below him. He pushed hard, spinning in the air, and grabbing the roof line of the building on the other side. Blistering cold met his fingers and he struggled to get a grip on the ice and snow that had been melting and refreezing off the overhang. Where’s the flaming roof?

His hands slipped free and he fell, cursing. His hip landed hard on the barrel and knocked it aside. It rolled away, flipping and twisting him onto the cold stones of the street. He scrambled to his hands and knees, his thigh aching, trying to move into the darkness ahead, when a heavy weight of frosty snow slipped from the roof and dropped on his back with a quiet “whump”. He sank down, pressed to the street, as the snow drizzled onto his face and neck. He tried to turn over but the cold thick blanket made it difficult.

Through the muffling pile he heard a voice call, “Parith! Are you OK?” Parith could feel someone pushing the snow off of him, and he was able to roll onto his back. Parith brushed the snow from his eyes and saw a shadowy figure above him. Instead of a dagger, the man held out his hand, offering to help Parith up.

Tentatively, Parith accepted it and stood. Once he was on his feet, he recognized the man.

“Korr!” he hissed and punched Korr’s arm. “You scared me to death! What are you doing here?”

Korr stepped back, smarting from the hit. “Could I not ask you the same question?”

Parith thought for a moment, “Yeah, I suppose so.”

“In fact, since I am here following you, my answer to that question literally depends on yours.”

Parith laughed, then started back toward the street. Korr followed. “I have an appointment,” Parith explained. They stepped out onto the street and resumed the pace and direction that Parith had maintained. “Back at one of the Winterfest parties that Thissraelle dragged us off to, I got to talking to one of the servants. After he got over his fear of being caught talking with one of the guests, he was curious what a wood elf was doing in Emberfire.”

They followed the road’s bend. “He and I started meeting in the plaza in the afternoons, when he wasn’t working. Sometimes his friends came along. With all the snow, it’s not been very crowded. He was a nice enough fellow, and it didn’t take long to know that he was not very satisfied with the way the kingdom was being run. He felt like the elves in the lower levels of the city aren’t being treated very well.”

“I guess that problem happens everywhere.”

“Yeah.” Parith agreed. “Anyway, I found out a lot of interesting information, over the few weeks. It turns out that the Dragon’s Flame is active here in Emberfire, too.”

Parith nodded. “Remember the wing of dragons that flew the demonstration above the Winterfest parties? I guess quite a few of the riders are members.”

Korr stopped. “Why have you not shared this with the rest of us?”

“Well, I really don’t know much of anything real to share yet.” Parith sighed. “Actually, that’s where I’m going tonight. He got me in touch with one of the dragonkeepers. I’m supposed to meet with him up ahead a ways.”

“Should I go with you?” Korr asked.

“There’s something big going on. I know it,” Parith said, nodding, “To be honest, I’m glad you found me tonight. I feel a little safer.”