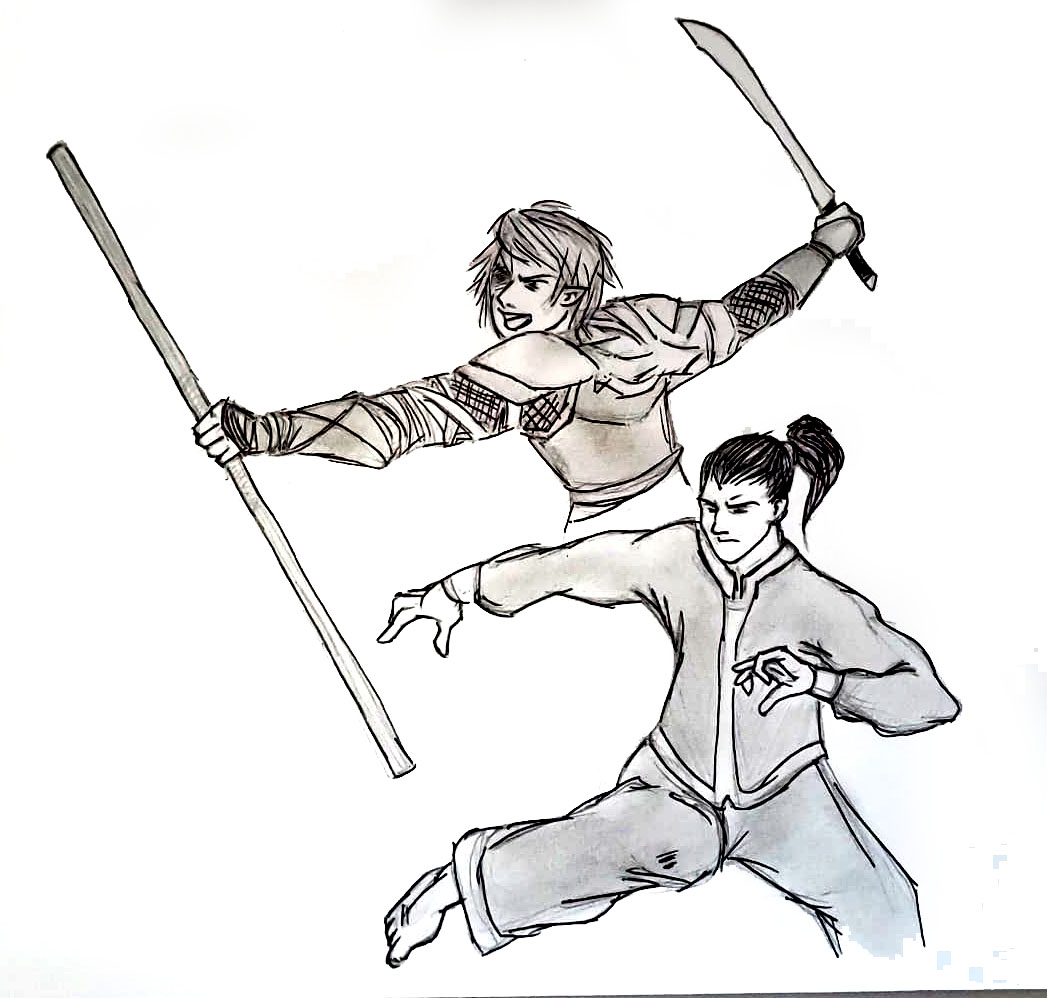 Korr dashed back into the fray. Immediately, A dragonrider officer with a sword rushed at him with a shout. Unable to set his stance, Korr was caught momentarily off balance, but still managed to sweep the sword thrust away with the back of his hand. He twisted his shoulders and planted two rapid punches deep into the man’s chest, sending him coughing to the ground.

Two more attackers rushed at him. He jumped back and to the side, trying to keep one in the way of the other. Behind them he saw Parith thrusting and parrying with his staff, and heard the clack and cling of wood and metal. Where’s the informant?

The attacker swung his sword in a fluid arc before him, forcing Korr back again. The other dragonrider pushed around, but Korr kept shifting. I only want to have to deal with one at a time. The foremost man swung his sword again, higher this time, and Korr saw it coming. Korr swept the man’s arm up and slipped himself under the slash. He stepped into the man’s now imbalanced stance and pushed him over, throwing him into his comrade.

Korr smiled. He could feel an energetic rush as he started to realize that all the time he had spent running his forms and practicing his skills in Jaxil’s home had made a difference. All of these motions felt fluid and almost automatic.

Focus! Back in your stance!

As he reset himself, Korr watched his hands as they swept through the flowing air around him. They felt more free, more certain, somehow, than they had ever before. His feet felt connected to the solid street below him. Energy flowed through his breath. He leapt past the fallen rider and landed on his left foot in perfect balance, flexing at the knee to keep himself steady. He turned his hip and lifted his right knee high. He felt slow, smooth, relaxed. As the other assailant stepped forward, Korr unleashed a furious kick, driving his right heel into the man’s face. The man’s head lashed backward and his body followed, arms splaying outward and his sword spinning free in the air. The man below him stirred, trying to roll over. Korr raised his elbow and dropped, driving it hard down into the man’s side. He felt a crunch under his weight and the man screamed in pain.

Korr rolled off the man and onto his feet, instinctively flowing into a new stance and assessing the fight. His mind was sharp and clear. I feel alive!

Parith was dueling with a lone rider, his staff spinning against the sword as he parried. He seemed confident and stable. A glance to his right showed the informant, however, struggling against the choking grasp of one of the riders. Another man by his side took a dagger and plunged it into the informant’s chest twice in rapid succession. The man holding him tossed his choking form aside to let him bleed out on the road.

Korr’s heart sank. We failed. He cursed himself. He had felt it. He had been One with the Moment, like the Master had taught. It had been magnificent, energizing. But in the moment, he’d failed to see his main objective, to protect those around him. Korr’s breath came in gasps, and suddenly the world rushed in and caught up with him. Time, sound, and perception returned, and he heard the clack of Parith’s staff against the sword, footsteps of the elves striding toward him, and the last gasp of Lathin’s life easing out. We came back to save him and we failed.

Korr also saw the strange and unnatural form of the dark human start to stand up from where it landed after being blown back by the blast. His cloak and tunic were shredded, revealing the dark and rough scaly skin in the shadows underneath. His eyes were dark, not white, with narrow slits, like a dragon’s. His face was blank and emotionless, mindless, as he stepped over his fallen elf ally.

The rider attacking Parith slipped on a parry, and Parith landed a solid hit with his staff to the side of his head. He dropped against the wall at the side of the road.

Korr backed away, maintaining his stance as best he could. “We should go, Parith.”

“Yes, we should!” They both spun and broke into a run.