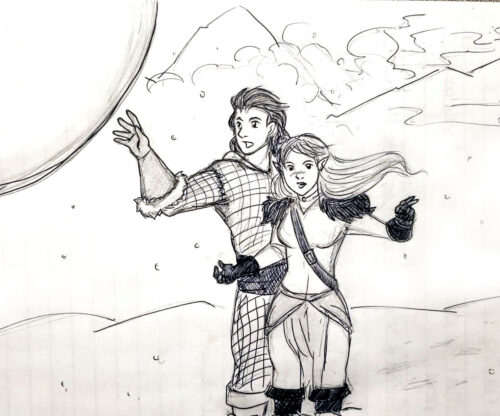 The boulder hovered in the air. It was a huge chunk of cold stone with angled facets and jagged fractured edges. It floated above the snow-covered ridge of the Emberfire mountains, held aloft in the frigid winds by Thissraelle’s will.

Her booted feet crunched in the snow as she approached it, looking up at it in wonder. She was small by comparison, its diameter easily double her own height. It was a speckled gray, probably granite, with occasional chunks of other igneous rock embedded in its sides.

She waved her hand and the mass began to spin, like she had just tossed a top into the air. She smiled, feeling the satisfaction and the biting cold on her cheeks. Her will, however, warmed her up from inside.

Heathrax flew around the other side of the rock, inspecting her work. His elongated body flexed out behind him, tendrils and tail waving in the mountain wind. He nodded to her. “Very good, very good,” he rasped, “Now shape it.”

She rolled her eyes. “Yes, I know how to do it. I meant to ask how you want it shaped.”

The dragon harrumphed out a puff of a chuckle. “As you please.”

She nodded and turned her focus back to the spinning rock. I may know how to do it, but I’ve never shaped something this big before.

She closed her eyes and dropped her head. A few moments passed, but nothing changed. The rock kept spinning, the wind kept blowing, and Heathrax simply watched with his tail waving in the air.

She clenched her eyes tighter, bearing down on her focus.

A crackle sounded through the air, then another. The boulder wobbled in its spin, as its mass shifted. The angles of the edges began to smooth, and the hard-cracks of the facets rounded. Like a lump of clay on a potter’s wheel, the form coalesced and drew together into a rounded stone, oblong at first, but gradually more and more stable. Finally, it twirled, perfectly balanced, as a sphere, as smooth as the globe map she had first seen in the library of the seekers.

She took a breath and opened her eyes, relaxing her shoulders.

Heathrax nodded with a smile of satisfaction. She looked up at the spinning stone with wonder. Her active will made her senses sharp and her mind vibrant. She could feel every turn of her little world in the air. Is this how He did it? Is this how The Creator felt when He made the world?

“Very good. I’m pleased! The sphere is an excellent choice.” Heathrax dipped his head in acknowledgment. Then, a motion off to his right drew his eyes for a moment. Thissraelle twirled around in the snow and saw Eddiwarth standing a few yards away, staring in awe at the stone.

She smiled. “Eddi!” She jumped through the snow and wrapped her arms around him, squeezing tight. She gave him a quick kiss before turning back to the sphere. “Mmm! Look! I did it!”

He held her for a moment. “It’s… It’s… amazing!” He released her and stepped toward it, crunching the snow. Standing on his toes, he reached up and touched its spinning surface. “It’s so smooth. How did you do that?”

She followed. “Focus does it. And for some reason, it’s easier to make the shape when it’s spinning.” She glanced up at Eddiwarth, then at the stone. He seemed to have a tinge of sadness on the edge of his excitement. “Is something wrong?”

He let his hand drop and just held her for a moment.

Heathrax slid away in the air, saying, “Why don’t you set the stone down and take a few minutes together?” They broke their embrace and stepped away from the orb. When Thissraelle released it, it dropped to the mountain with a loud and grinding crunch, spitting rock splinters and snow everywhere as the spinning ground to a wrenching stop.

Thissraelle and Eddiwarth cowered to protect themselves from the spray, then stood and shook off their cloaks. She said, embarrassed, “I guess I could have set it down a bit easier, heh?” She looked at the almost perfectly round rock and laughed out loud.

“What?” Eddiwarth asked, not seeing the joke.

“I just imagined some exploration party, years from now, climbing high up to the mountain top and seeing this… They’ll wonder, ‘What the shaking stones is this big round rock doing here?’”

Eddiwarth laughed with her. She raised her brow and turned her head. “There is something bothering you, isn’t there?” He didn’t respond, but she could see it. “Let’s go into the lair and get out of the wind.”