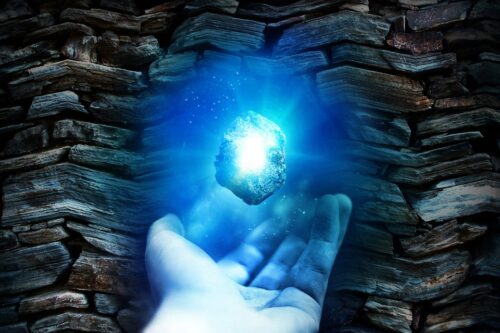 Eddiwarth sighed and held Thissraelle’s hand. They sat together on a stone bench nestled deep in a corner of the cave in between some crystalline formations, stalagmites, and columns. Thissraelle had shaped the bench a long time ago, and often used it as an isolated spot to review studies in between practices with Heathrax. A soft cushion stolen from a neglected chair in the house and a few hanging oculi had completed the setting. She had thought it would be a wonderful romantic spot to bring Eddiwarth to, but now that he was here, it all felt tense, foreboding. She tried to look into his eyes to see what troubled him, but he kept his face down.

This wasn’t a new feeling in him. She’d sensed a growing anxiousness for some time. She’d assumed it was simply her parents’ arrogance that was bothering him but she was a bit worried that it might be more.

“Thiss, you know…” he breathed deeply, “that I love you. I’ve told you that before. And I know that you haven’t felt to say that to me but I know that your feelings run deep, too.” He gripped her hand tighter. What’s he saying? A chill ran through her, more than just the cool of the cave.

He went on with a heavy sigh. “Parith and Korr are leaving Emberfire. There’s a lot of tension in the City and, frankly, in the house. I’ve felt it, too. Korr needs to go back to his master at the academy and report on his quest, and Parith wants to find Granthurg and the dagger. He thinks it’s going to be key when the dragons rise up.”

He wants to go! He’s leaving me? “What are you saying?”

“But you want to leave? You want to go with them?”

“I can’t really explain it, because I don’t really understand it, myself.”

She wiped her nose and sniffed. “Try.”

“Thiss,” He raised his eyes. They were red and swollen. “You are amazing. You are the most wonderful thing that has ever happened in my life. You’re a powerful wizard, brilliant, and so beautiful. I don’t see why you want to be with me.”

She opened her mouth to object, but he cut in. “I’m glad you do, but I just don’t see it. Not right now. That’s why I need to go. I need to help find out what’s going on. I need to be more than just a failing novice wizard. I need to earn my name. Then, if you still want me, I’ll be worthy of you.”

Thissraelle felt her face flush and her anger rise. “That’s nonsense! You’re brave and wonderful! You don’t need to prove anything to me!” she gasped, realization washing through her. “That’s not you speaking. That’s my dad! He’s gotten into your head.”

Eddiwarth nodded. “He’s pointed out to me what I’ve been feeling all along.”

Thissraelle looked around at the lair, the books, the gems, the space. She knew Heathrax would be in the larger open chamber wanting to get started on her exercises again. A new heaviness weighed on her soul, and she felt a burning in her eyes.

Eddiwarth nodded again and sniffed. “I know. Your place is here. Learning. Becoming what you need to be.”

She collapsed against him, clinging to his arm and her eyes burned. She clenched them tight and felt them drip, feeling the loss already. He held her tight against him.

After a moment, she raised her head and looked at a table across the chamber. It was shaped flat from the stone of the cavern, and held a number of books and a bowl full of oculus gems. With a resigned sadness, she lifted her hand. A slight glow appeared on her fingertips and one of the crystals rose out of the bowl and floated to her hand. It was a sapphire, a deep blue. She held it out to Eddiwarth.

“Here. Take it with you. It will make it easier for you to use your mind to connect to me.” She looked up into his eyes, like they were his own oculi. “I’ll be able to hear your voice. You will never be that far from me. You’d better use it a lot.” He gave her a sad smile and leaned down to kiss her. She wrapped her arms tight around his neck like she didn’t want to let go.