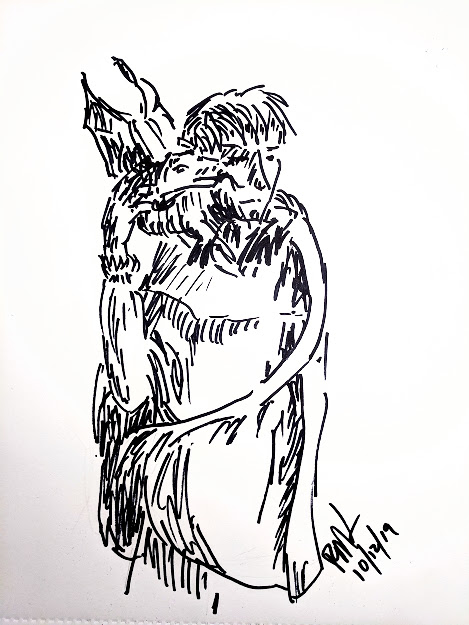 Eddiwarth stepped out onto the bridge, away from the ornate stone porch of the Shrine to The Dragonfriend. He felt the chilly wind blowing across the Emberfire Mountains and smelt the acrid odor belching from the hot springs flowing out of the mountainside. He walked slowly, his mind wrapped up in memories of this place. Memories from only a few short months ago.

To Eddiwarth, it felt surreal to see this peaceful place and remember scenes of such fear and violence.

When they had first arrived here that day, the team had approached from the other side of the canyon, walking toward the shrine on the mountainside now at his back. The hot springs were beautiful pools up the side of the canyon, where mineral buildup over many years had created terraced falls of richly-colored hot water from deep in the volcanoes of the Emberfire mountains. Now, those terraces lay shattered and crumbled by the weight of the dragon that had fought and died there as it clawed its way up the wall. The water still ran, but now simply cascaded down in a single flow, splashing on crumbled rocks and crumbled stones coated in icicles and layers of frozen spray.

Parith walked on ahead, stepping over the debris on the bridge. It was wide and slightly arched as it reached across the foggy crevice below. It had an elaborately carved railing on either side, with tall pillars raising up into the air every few dozen feet. Most of the stones and clutter now on the deck of the bridge was from these features, broken, fallen, and crushed by the fury of the dragons in the fight.

I remember a lot of fire and screaming. I was flying over the bridge, right here, throwing flame blasts at the dragon. Thissraelle was over there, trying to heal Parith…

He saw Parith staring at the cold stones of the bridge deck. He also seemed to be lost in memories and reflection. Eddiwarth stepped up to him, and saw that he was tense, like he was fighting to hold something inside of him. “You OK?” Eddiwarth asked.

Parith looked up and pointed back down at the bridge. “It was somewhere around here that my little drake fell. Chewed up and spit out. Fighting for me. For us.” Eddiwarth remembered the cute little lizard that had been constantly wrapped around Parith’s shoulder, trilling and begging for snacks.

I don’t know what to say. “I’m sorry,” was the only thing Eddiwarth could think of.

Parith steeled himself, sniffed, and walked on, mumbling, “It’s all good.”

Eddiwarth followed, reluctantly. The stones of the deck where they walked changed from a dusty gray to a dark scorched black. I remember this was like a wall of flame. The dragons belched it out all over this area. The heat was incredible. I tried to protect Thissraelle. She was walking toward Jaxil, to see if she could stop the fight, but then Heathrax came.

He breathed in the chill of the air. I fought the dragons here, and I used my magic to fight. He shook his head. So why was I able to do it? Why could I control my magic then, but now when I try to focus and “be the flame”, I break and it all falls apart? What am I missing?

Korr stepped up beside him. “He is gone.”

“What?” Eddiwarth jumped out of his thoughts. “Who?”

“The dragon man.” Korr pointed, “I fought him back there, at the entrance to the shrine. But there is no body.”

Eddiwarth thought about this. “You said that you fought him in Emberfire as well. He must have lived somehow.”

Korr made a doubtful face. “I killed him with his own spear. I cut his throat. It is difficult to see how he could have survived that. My first assumption was that there were more than one. But now, I am not sure.”

“Maybe,” Parith had walked back to them. “Maybe it was carried off by wolves or bears. Drakie’s remains aren’t here, either.”

Parith kicked the dust and stepped away. “Well, let’s go get off this mountain. The less time I spend here the happier I’ll be.”

Eddiwarth and Korr sighed out a cold mist and followed. In a moment, they passed a huge dragon carcass, frozen in place and draped across the clutter of the bridge. Its scales were a dark red and it was coated in a layer of icicles and frost. Its body was angular and distorted, like its bones were set in the wrong places. This is the one Jaxil fought for us. How did I not notice this earlier? I guess I was focused on my own memories.

The memories continued to dance in his thoughts as he crossed the bridge, like ghostly images on the stage in his mind. One of them kept coming back.