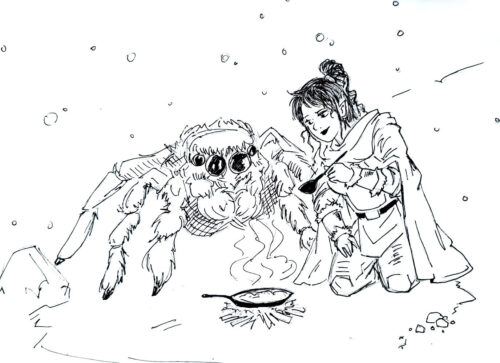 A shiver woke Eddiwarth, and he pulled his blanket tighter over him before opening his eyes. It wasn’t light yet, but it wasn’t that dark anymore, either. He sat up.

A thin layer of frost covered the deck of the waypoint’s hut. He shook his blanket and swept it around his shoulders as he stood. He shivered again, then stretched for a moment. The morning chill ran through his tangled hair and across his face. He stepped off the deck platform and crossed the few steps to the fire pit.

The fire’s out. No wonder I’m so cold. Where’s Korr? He had the last watch. He should have kept it going. Eddiwarth looked around, but saw only shadowy forest. Hmmf. He’s probably off practicing.

There wasn’t much spare wood around the fire pit, either, only a few thin logs. Eddiwarth leaned over, picked them up, and placed them on the ashes. He did feel a little warmth radiating from last night’s coals. Good. That’ll make it easier to rekindle.

It had not been easy to start the fire when they had arrived last night. The slowly melting snow had soaked most of the fallen wood in the surrounding forest, and the night made it hard to see as well. But soon enough they had a small stack gathered, and with a little bit of hard focus of his will, he had managed to keep a log lit long enough to catch. He’d been a bit nervous, but had been able to keep a small tongue of flame going. From there, the fire had grown on its own and they’d been able to dry out the other logs in proximity.

Now, as he restacked the last of the wood in the pit, it only took a simple push of will on the embers below for flames to dance up onto the fuel wood.

He heard a crunching of sticks behind him and jolted around. Korr stepped up to a stone by the fire pit and sat down. “Good morning to you.” Korr’s breath billowed out in front of him as he spoke. “I’m sorry I let the fire die. I don’t have the skills with the flames that you do.” He wiped his face in his hands.

Eddiwarth choked a laugh. You should know me better than that.

Korr stood and filled the small pot with snow and settled it into the growing flames. They stared at it in silence as it let out a whispered hiss. The forest birds were waking and chirping their arguments in the trees.

The peaceful chill of the morning was slashed by a shrill scream. Eddiwarth and Korr jumped to their feet and looked up into the zigzag maze of branches over their heads. That wasn’t a bird. That was a girl!

A short cloaked figure dropped to the ground from the trees, ran at him and grabbed him around the waist. He almost lost his balance, but stumbled back. Startled, it took him only a moment to realize he was being embraced, not attacked. Just as quickly, she released him and stepped back. “Eddiwarth!” she squealed, “It’s so good to see you! And Korr!” She jumped over to the other surprised man and threw her arms around him for another quick hug. She had messy brown hair, not long, and a wood elf’s ears. She wore a short cloak and brown leggings with fur boots. She stepped back and smiled a big grin.

Eddiwarth looked at her with confusion, but her face quickly clicked into place in his mind. “Illariel!”

“We’re fine! We’re great, forest willing!” Eddiwarth still looked confused. “You found us? Were you looking for us?”

“Yes!” She rolled her eyes and clicked her lips. “Well, not you, specifically. There have been a lot of problems with the high elves lately and I came to see. My mom told me not to, but I did anyway. I’m pretty safe as long as Ari is with me. Then the trees told me there was someone out here, and I found you, and it’s YOU!” She was hopping with excitement.

“Hey, where’s Thissraelle?” She asked as Korr sat back down and offered her a stone by the fire.

Illariel drooped her shoulders. “What? Why? I want to see her!”

So do I, kid, so do I.  “She stayed behind. She’s studying magic with Heathrax.”

Illarial’s eyes widened and she gasped in a breath. “You found him? Ooh! What’s he like?”

“NO!” Illariel’s eyes got even wider, if that were possible. “That’s amazing!”

Eddiwarth sat back down and offered her a seat beside him.

“Wait. Just a minute.” She jumped a few steps toward the forest and made some chirping noises with her teeth, looking up. Then she clapped her hands and stomped, twice. From in between the trunks of trees came more chittering sounds. Eddiwarth noticed an odd smell in the air, but couldn’t identify it. “It’s OK, come on out,” Illariel said in a lilting tone.

About eight feet up the enormous trunk of one of the oaks, a giant spider crept into view. Korr and Parith leapt to their feet and Korr set his legs defensively. The spider jolted for a moment, but didn’t run. It was the largest spider that Eddiwarth had ever seen. Its legspan was at least four feet across, even drawn up close around its body like it was. It had a line of four eyes across the front of its head staring at them. and it flexed its palps and made a hissing noise.

Illariel glanced back at him and shook her head. “It’s fine. She’s just scared of you.” She made some more ch-ch noises with her mouth and gestured to the spider. It hesitated, but jumped down beside Illariel with a thud. Illariel stroked the dark hairs on the top of its head and walked over to the firepit and sat back down. The spider followed, slowly, but kept herself on the other side of Illariel, away from Eddiwarth and Korr.

Illariel looked at the two men as if they were being rude. “Relax! She’s my friend. I’d introduce you, but you won’t be able to pronounce her name.” She made some clicking noises. The spider replied and settled beside Illariel, still hiding like a child behind her mother’s skirts.

“Hey!” Everyone turned to look back at the waypoint platform. Parith stood there, wrapped in his blanket, his hair smudged and twisted across his squinting eyes. “Why doesn’t anyone think to wake me when something happens?”

Illariel leaned over to Eddiwarth. “Does he always look this… this grumpy when he gets up?”