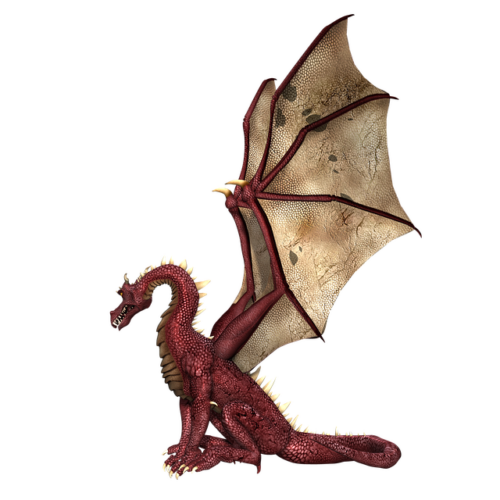 Even after two days on the wing, I’m still not used to this. What a miserably exhausting way to travel. Tonklyn pulled his cloak and scarf tighter against the cold night wind. His body swayed up and down in opposition to the undulating wings of the drake. His head bobbed gently forward and back with each flap. The constant motion, hour after hour, all night long, had made his back and shoulders ache. The daytimes had been filled with fitful sleep and shallow dreams, but at least that had been time spent on solid earth.

He strained to see the mountains below, looking past the back of the drakeman’s saddle and over the wings. We should be seeing the guidelights on the mountain terrace sometime soon. But below him was only dark.

Where are we? How does the driver navigate this beast? I can’t see anything down there.

Tonklyn looked to his left. The moon wasn’t full but it still shed some light through the starry skies. Its reflection sparkled off of the dark blue scales of the young dragon, Telix, flying alongside them. Telix was large, much larger and spinier than the drake Tonklyn was riding. As he drew his wings up, Tonklyn could see a hint of the red underwing and chest of the young beast. His flowing motions in flight were easy and confident, even after two long nights of flight.

Behind Telix flew Ryxitt, a much older white wyrm. White, but with a hint of a deeper blue in his scales and underbelly. His head and neck sagged low as he flew, as if holding them up was tiring. His wings were not as strong as Telix’s, so he had set the pace for their travels. He was the one that determined when it was time to land and find shelter and concealment in the morning light. Tonklyn hadn’t minded. While the younger dragons could have easily gone on further, it gave Tonklyn a reason to call for a rest from the shaking.

Sounds of wings and a heavy down-draft came from the dark above Tonklyn. Looking up, he saw a third dragon, a red, the largest of the three. Its sleek head swung down to within a few feet of Tonklyn, snorting a puff of hot sulfuric breath into the air. Tonklyn coughed.

Tonklyn nodded, and called out to the drakeman in front of him. The man leaned his head back and pointed down into the dark expanse. He shouted, “Can you see those lights?”

Tonklyn strained, but his view was obscured.

“Yess, I cann,” Exakas hissed, “They are but tiny points below. Do they mark our destination?”

The drakeman nodded. Tonklyn shifted his cold and bloodless legs, but still couldn’t see them.

This is good. Tonklyn smiled, turning his head back down against the cold wind. Kirraxal will be very pleased. These three will be strong allies and commanders in the new dragon army and kingdom. I’ll bet none of the others, dragonbonded or Dragon’s Flame priest, has been able to assemble so much force.

Recruiting these three dragons had not been easy. Finding them in the first place had been a monumental task. While flying sorties and patrols over the Emberfire mountaintops, the dragonriders had located a number of possible lair and clutch sites. Lathin had also been very helpful, researching them and reporting to Tonklyn. Once the snowstorms had eased, Lathin had arranged for Tonklyn and the dragonbonded soldier to accompany the riders on a few clandestine flights. Too bad Lathin had to turn on us. He could have been very useful when the dragon uprising starts.

The drake began to drop, losing altitude, and lurching Tonklyn’s guts into his throat. He hated this sensation even more than the wobbling up and down, although dropping signaled the nearing end of the flight. The wind in his face grew stronger and stung his cheeks, even through the scarf. Tonklyn looked up and around him. The others were following.

The drakeman leaned back and shouted, “You’ll want to have them decide who lands first, so we don’t have a pile-up on the terraces!”

“I’ll do that!” Tonklyn replied, then thought for a minute. This could be a bit tricky. Exakas is dominant. He’s loud and demanding. He’ll probably end up as a leader. Should he land first? Maybe not having the first slot will put him into his place.

Ryxitt was the hardest to convince, and is still more than a little skeptical of our cause. He’s also the oldest and showing him the respect would go far. That, and he’s tired and shouldn’t have to wait.

But then, Telix was the first to join us, then showed me the lairs of the others. Maybe his immediate loyalty and enthusiasm should be rewarded. He’s very young, though, so he’ll expect to be last. It’s a tough call.

Tonklyn thought for a moment. These diplomatic decisions may seem trivial to some but Tonklyn knew how important they can be in the long run. Finally, he made his decision and called out, pointing and waving his hands.

“Ryxitt!” Tonklyn waved his hands, gesturing that he was to take the first turn. The old dragon nodded gracefully, tucked his wings into a glide, and aimed himself down at the lights.

“Exakas!” Tonklyn shouted next, but the large red beast was already banking away into the drop.

Turning back to his left, he signaled to Telix, who nodded, waited a moment, then angled away into a dive.

Finally, Tonklyn breathed in the frigid air and sighed. “All right,” he shouted to the drakeman, “take us home!”