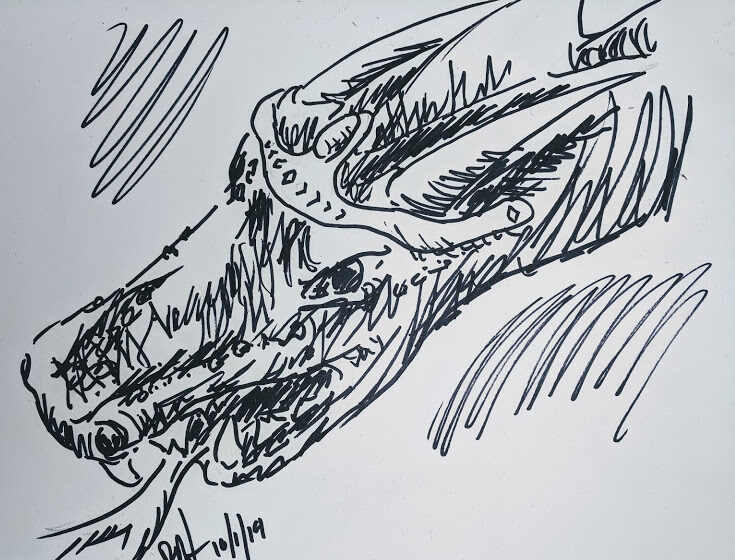 Tonklyn stood by the empty primary dais in the throne room, his face a stoic mask of formality. It hid the uncomfortable mix of excitement, pride, and tension boiling in his guts. Before him stretched the deep and expansive hall. The ceiling was carved high, deep into the heart of the mountain. Long rows of thick pillars reached up into the darkness to support the rock above. The emptiness echoed with the guttural growls and grumblings of dragons.

Dragons. Tonklyn let out a breath as this thought washed over him.

Here I am, surrounded by dragons. The most powerful and feared creatures in this world. And I, a human, walk among them without fear.

Well, that’s not entirely true. There’s actually always some fear. I never know how Kirraxal will react on any given day. And now, here in this hall there are four more great wyrms to deal with. Kirraxal is not always the most, ah, diplomatic of kings, either.

A fourth dragon had arrived at the mountain palace that morning. She had presented herself as Xintalan of Umbrawood. She was slightly longer and thinner than the others and her scales were covered in a seemingly green and brown pattern up and down her back and wings. She seemed to be engaged in a discussion with Telix and Exakas while Ryxitt looked at the carvings shaped into the columns.

Tonklyn couldn’t make out their conversation. Not only was it hushed, but it was in the old wyrm speech. Even though his study had made him ever more fluent, he still was only able to make out a part of what they were discussing. His ears perked when he heard someone mention the dragon’s tooth dagger. He tried to listen more intently, but Ryxitt stepped in and asked if anyone had yet spoken with Heathrax about the gathering. Another wondered if he’d even survived the great pox.

There is a lot riding on this meeting. If Kirraxal can rally these beasts to his cause, we will be in a position to strike, soon. If not, well… Tonklyn sucked in a breath …today may well end in flames.

As if in answer to his thoughts, a darkness began swirling up from the floor, like the dust of the fields in a wind whirl on a hot summer afternoon. The dragons stepped back, a bit surprised, and the darkness swelled up higher toward the hanging chandeliers. As it grew, it began to form the shape of a long neck, a head, and broad dark shoulders. The wind whipped at the darkness, but it held its shape. The darkness formed a body, and wings stretched up, waving in the air.

Tonklyn smiled as the rushing air whipped his robes and hair. Now THAT’s an entrance!

The darkness coalesced and solidified into the full living form of a large black dragon. As the shadows faded and the winds subsided, Kirraxal’s feet landed firmly on the stone floor in the center of the hall. Tonklyn felt the impact rumble under his feet.

Tonklyn immediately dropped to one knee, bowing his head. Kirraxal nodded his crowned head to each of the attending dragons in turn, then turned his back on them. He strode with force to the stone dais where Tonklyn stood, and stepped up upon it. He spun back around, set his haunches down, and puffed out his shiny black chest. His enormous tail swept around before him and curled around his forelegs.

Tonklyn stood and struck the floor hard, three times, with his luminous staff. “I present His Majesty King Kirraxal the First, crowned with the glory and honor of the ancient Dragon Kings, bearing the mantle left by King Maxinn the Third.”

Kirraxal raised his head up and his throat erupted in a deafening roar. Talix immediately raised his head and joined in the call, and after a moment Exakas and Xintalan followed. Ryxitt did not, however, preferring simply to dip his aged head in a brief respectful bow.

Tonklyn tried to hold himself still while the sounds echoed through the vaulted chamber and thundered in his ears. Finally, the reverberations faded and Kirraxal looked out from the dais. His eyes met the gaze of each other dragon. They were silent for the moment, glancing warily at each other and at Kirraxal.

Tonklyn’s lips curled just slightly with approval. He has their attention. He doesn’t need to rush this.

Finally, Kirraxal spoke in a deep and austere voice. “I bid ye find welcome here in our palace. We have summoned ye hither that we may shew ye our Majesty, and pronounce henceforth the re-establishment of the reign of the Dragon Kings in the land of Wynne.” His voice was steady, but Tonklyn could hear him struggling with the old wyrm language.

“There is much that I would discuss with ye all. We have, with the help of our Chancellor, created plans that would bring the kingdoms of the two-legs to their knees. Each of you all will have an important role in the devastation, and ye will find places of power and authority in our realm.”

Exakas’ eyes narrowed and his head lowered. His lips pulled taught over his sharp teeth. “And what,” He hissed, “would make thee believe that I would so readily bow to thee?”

Oh, the stones are shaking…

Xintalan drew her head back and hissed, flicking the air with her tongue. Her deep green eyes danced back and forth between Exakas and Kirraxal. Ryxitt stood steady, not retreating, only observing.

Talix tried to break the tension, “Brothers and sister dragons, is it not amazing that the great crown has been found, and is worn again? The Dragon Kings rise again!” He lifted his head to make another roar, but was interrupted.

“The crown is truly amazing. That it is now time to come forth is true. But by whose decree art thou anointed to wear it? I ask again: Why should we follow thee?”

Kirraxal’s eyes and nostrils flared wide. His lips pulled back in a horrific grimace, and a growl grew from deep in his throat. His wings unfolded and his shoulders began to twitch.

Tonklyn stepped back instinctively. By the Creator, this is the flaming end. They’ve done it, now. He tried to force himself to hold steady in his place, but his knees shook under his ministerial robes. His breaths were quick and shallow and his neck began to sweat.

Kirraxal drew his body up, and lunged forward, stamping hard on the stones in front of the dais. The ground shook. He threw his wings out wide and thrust his head forward, maw open and teeth bared. A roar erupted from his voice that thundered over the court of wyrms before him.

“I am the King,” he bellowed, abandoning formality and the ancient language, “because I found the crown! I already have weakened the strength of the humans and turned the elves against each other. I have set the stage for our dominance! While you sat on your tails in the chilly mountains, I alone am founding our realm! I will lead us forward! The dragons of old were gods! We will follow them!”

The dragons in the court fell silent. Then Ryxitt slowly raised his head to roar in salute. The others followed, and the cavernous hall rumbled with their fury.