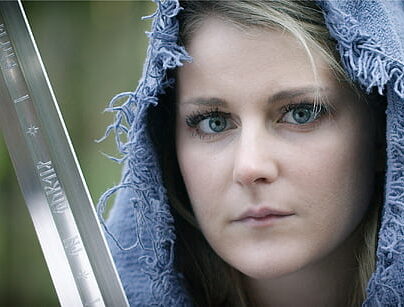 Shylia’a gasped and her hand jumped up to her throat. Her eyes flared wide and a scream died in her chest without a moment to escape. Her heart and breath pounded in her ears so strong that for a few moments she couldn’t hear the shouts of the crowd.

The executioner kicked the bloody body aside and held up the dripping head, dangling it by the hair for the crowd to see. The priest raised his hand and shouted, “Finita est!” He looked to his left, to the long line of prisoners at the end of the platform. “Bring the next one forward!”

The wagon jolted on a broken stone in the road. Shylia’a ripped her eyes away from the horror by the ministry and grabbed for the corner post of the wagon. She looked down at the prisoners huddled before her in the cart. The woman hugged the trembling boy close.

They lied to us.

The younger man rose up on his knee in the straw. He turned to look and see what he already seemed to know was happening.

There will be no trial. They will just be lined up and executed.

“Get down, you!” the soldier in the wagon shouted. “Your turn will be soon enough!” He poked the man with the butt of his spear. The man raised his arm defensively, but sat down. The boy started crying. The oldest prisoner raised his face and palms skyward, his shackles swaying with the motion of the wagon. His lips moved in the Church’s Litany of Lights.

How will your faith save you now?

The crowd shouted as another prisoner knelt. The acolyte read the name and the priest called out, but, like the old man’s prayer, their words were drowned in the noise. The sword, now wiped clean, raised again.

Wait. If these prisoners are supposed to be wizards, why aren’t they saving themselves? Why would they let themselves even be held in a cell? Can’t they just magic up an escape?

The wagon lurched to a stop, jerking everyone inside forward. Shylai’a tightened her grip on the pole and steadied herself easily. Another roar surged from the crowd.

But then, if their powers were stripped, they would no longer be wizards. Why execute them?

They must be Boar’s Heads. Or some other dissidents. They’re —

An arrow stuck into the wall of the wagon, close to her knee. Another hit the floor of the cart. Her comrade gasped and fell at her feet, clutching at an arrow in his lower throat. The boy screamed and recoiled into his mother’s arms. Shylai’a dropped next to him, just as his eyes rolled back and he went limp. His blood stained her hands, his tunic, and the planks of the wagon. Metal sang as swords hit spears and shouts of command hit her ears. She jumped back, drawing her sword. Her eyes followed the upward-pointing fletchings of the arrows to the roof of a nearby building. Four figures, silhouetted against the midday sun set their bows again and raised them to aim.

The archers loosed a second volley of arrows down at the wagon. Shylai’a vaulted over her dead companion and pressed herself down against the side of the wagon facing the archers. Two arrows hit the wood of the wagon, each with a solid thunk. A painful scream rang from beyond the other side as one arrow landed true.

Footsteps rushed up against the wagon and angry people began shaking it from side to side. Shylai’a, the prisoners, and the body were tossed about like a handful of lots about to be thrown to a table. Suddenly the far side lurched up high in the air and the wagon’s near wheels snapped and shattered, dropping the bed hard on the ground. Shylai’a grunted and bounced with the force of the impact, then tumbled as the mob turned the wagon fully onto its side. She could barely move, pressed to the ground by the weight of the dead soldier. The prisoners shouted and the child screamed in pain as his shackles jerked tight. The mob rushed the wagon.

Shylai’a opened her eyes. All she could see was the gambeson around her companion’s hips and his leggings pressing her cheek to the wood. She gagged and coughed, struggling to move her arms to push him off. She strained and twisted, finally able to roll out from under the body and push it away. Where’s my sword? What’s that screaming?

The young boy dangled by the shackle chains fastened to the wood of the upturned wagon. His mother and another man were trying to grab his waist and lift him up to relieve the strain on his arms, but weren’t able to get a good footing in the press. Someone else had climbed up on the now broken hitch and was trying to wedge a bar under the iron mounting that held the chains. The boy glanced over at Shylai’a and their eyes locked. In a moment her breath stopped and her heart dropped.

This is all wrong. This is so wrong. I can’t do this.

She looked down at her companion. He had been the pointman to her blade position on several raids, scouring out the Boar’s Head and the Dragon’s Flame insurgents. She had been glad to be in an army, swinging her sword. She’d never asked anyone why. But this is all wrong. At the time, it had nagged at the back of her mind, but now she could see it in the young boy’s crying eyes, and hear it in his voice as he called out to his mom. This is all wrong. They shouldn’t be here. Where are the keys?

She leaned forward and rolled the soldier to his back and opened his tunic. He should have a pouch on his gambeson or on his belt. There it is!

As she reached for it, a hand gripped her hair and yanked it up and back. She twisted, trying to free herself, but that only made it hurt more. An arm with a dagger flashed in front of her, up to her straining neck. She grabbed at the wrist and struggled to keep the blade away.

“Soldiers are coming! Kill her!” Someone shouted. “Run!”

“We can’t leave them!” Another voice called out.

Shylai’a grunted, “Let go! I’m trying… trying to save them!”

The man with the blade stopped struggling, but didn’t relax his grip. He pulled her head further back and rose up over her. “What are ya saying?”

She coughed and held up the pouch. “I have the keys.”

The man hesitated, then pulled the dagger away. He shoved her down with his foot on her back. “Get to it, then, but we’ll kill ya if ya don’t!” As he stepped back, she gasped and rose up to her knees. She clawed open the pouch and pulled out a ring of keys.

“The boy first!” the mother cried, trying to hold him up.

Shylai’a scrambled up to her feet and began trying to fit keys into the boy’s shackles. Her hands shook. Shouts, footsteps, and blades sounded in her ears. The boy’s pleading eyes pierced her deeper than any arrow.

The lock tripped open and the boy dropped into his mother’s arms. “Oh Jiommy!” she screamed, holding him tight. Shylai’a immediately began working on the mother’s shackles. As soon as she was freed, many hands stole the two of them away. Shylai’a jumped to the next lock, but her quivering hands dropped the keys. She shouted and reached down for them, but her eyes were blurred. “I’ve got them!” a man shouted. She fell back against the bed of the upturned wagon bed, gasping for breath as the man began to work on the remaining locks. I’m a traitor, now. I’ve got to get out of here. I’ll be dead if they catch me. I’ll be executed.

She tipped to her knees and crawled off the wood. Running feet were all around her.

She saw it had been tossed to the stones from the back of the wagon. She tucked her head down, snaked between the kicking and running legs, and snatched it up. She quickly crawled to the wagon, leaned against it, and stood on shaky feet. Still leaning low, she slipped to the relative cover of the upturned wagon bed. Her pulse pounded in her head and her breathing was rough.

Soldiers are coming. I can’t wear these colors. She tore off her tunic and threw it in the gutter. As the scattering crowd trampled it, she jumped in and melted away.