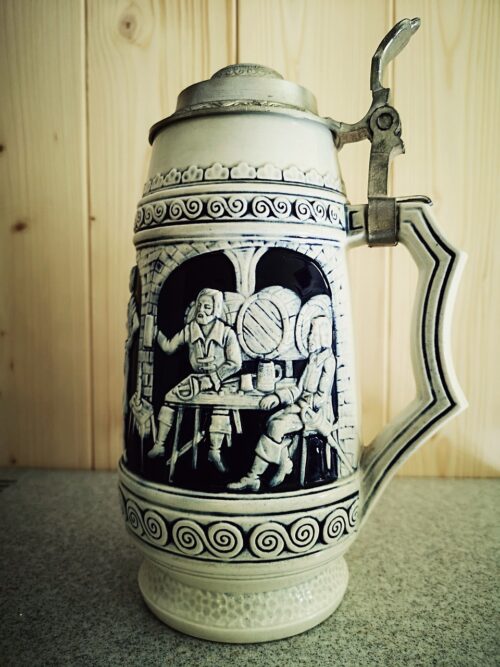 “A second round, then, men?” The barmaid asked. She wore a dark working dress and a stained white apron. Her brown hair was mostly tucked back into a bun behind her head.

“Aye!” One of the three giants shouted. Another, the tallest and broadest of the three, nodded his own agreement.

“I’m sorry again for the accommodations. We don’t get many river men in here. We’re a few blocks from the waterfront.” They were crowded around a circular wooden table. Normally, it would have been a fairly large table. Most of the time it was used to seat eight to ten thirsty humans. However, seating three giants tonight it looked more like men had been forced to eat at the children’s table at a family winterfest feast.

“Tip her welll, Grranthurg!” The first giant slurred. Granthurg, the shortest at just under nine feet tall, sighed and dug some copper out of his purse. He stacked the coins with a chink on the table.

She smiled up at him, looking a little like a child by comparison, then took the coins .

“Are you sure you want more, Shollburn?” Granthurg asked. “You’ll have to have Donbenn carry you back to your inn!”

“Ehh, I’m used to it,” Donbenn muttered. “He got started earlier this afternoon. He said he was warming up for Vernalfest.”

Granthurg laughed and took a draw from his own tankard. It was a huge stein by human standards, but in a giant’s hands it looked much smaller, at least still comfortable.

Donbenn set his own drink down. “So how’s mom? And what can you tell me of Jillia and Hargol?”

“They’re all good. Fine. They missed you both at Winterfest.”

“Yeah. We missed them, too. But the winter was harsh, and we got stuck up in Umbramire.” Donbenn sipped again. “Normally I don’t like being up there in all the swamps and marshes, but, frankly, Twynne Rivers is getting to be scarier.”

Donbenn continued, “After what happened last summer at the cathedrals, I’m more than a bit surprised to see you here in the city. Mom wrote us when you got home, just so we’d know you were still alive, but she said you didn’t tell her much. She said you had a hefty scar on your leg, though.”

Granthurg sighed. “I haven’t talked about it.”

Granthurg set his drink down and wiped his face, his fingers lingering on his beard. He scratched his chin for a moment, then nodded. “You guys know that I’d been working for Rinkmorr, right?” His brothers nodded and mumbled agreement. “Well, we were doing a long run up the Southern Wynne from home last spring. We were attacked by a couple of river pirates. At least, I thought they were pirates. We fought them off, and I thought nothing else of them.”

“Yeah,” Donbenn shrugged, “that happens from time to time.”

“It does, but not that often on the southern runs. It’s more common in the East by Portstown.” Granthurg drank and continued, “Well, it turned out that Rinkmorr had gotten a hold of something other people wanted. I think he won it throwing lots or something. But they wanted it bad enough to kill him for it.”

“Yeah, well, I found that out later, when they came after me, too.”

Donbenn sucked in his breath. “What happened?”

“Well, I met some new friends that were going upriver, up the northern run. She wanted to go on to Emberfire, and a few of the others were looking for some missing kids in Dirae. Then all of a sudden, Rinkmorr told me to take the barge and leave Twynne Rivers. He said it was urgent. Since that’s the way they were going, I said I’d wait for him up there. I helped my friends find their kids and rescue them from some slavers, but along the way, we were also attacked by people wanting to take this thing of Rinkmorr’s.

“Then, later, when I came back to Twynne Rivers, I found out that Rinkmorr’d been killed, and they tried to kill me again. At least by then, I had found out what it was they were after.”

“What iss it?” Shollburn was hunched over the table, enthralled by the tale.

Granthurg leaned in and glanced around him. He shifted one of the empty chairs at the table so its back would better conceal his movements. He let his arm dangle down below his knees and he slid his fingers into the top of his right boot. He hesitated, then drew out a dagger in a leather scabbard, and quietly set it on the table.

Donbenn blew a breathy whistle and reached for it. Granthurg gestured to keep it low on the table as his brother slowly turned it in his hands. It had a solid hilt of steel wrapped in leather, with a heavy disc-shaped pommel. In the disc was a casting of a dragon breathing fire. The cross-guards were crafted to look like the extended claws of a dragon’s hand.

He unwound the thin leather tie of the scabbard and pulled the blade out with a soft hiss, turning it over. His eyes widened and Shollburn leaned over to get a better look. The blade was a dull white, like ivory, and had ornate carvings etched into the side. Both edges were finely sharpened, and the blade curved to a dangerous point.

“What is this thing?” Donbenn whispered.

“Believe me,” Granthurg sighed, “I wish I knew.”

Donbenn hefted it in his hand, testing the balance, turning it. Granthurg immediately waved him down. “Please. Even months later, I still feel like I’m constantly followed. Someone wants this, wants it badly, and I need to find out why.”

“I don’t know. I’ve only used it once.” He gently, but insistently, took the blade back from Donbenn and slid it into the sheath. He leaned forward again to tuck it into his boot.

Donbenn whispered, “When was that?”

Granthurg straightened back up and took a drink. He relaxed a little, knowing that the dagger was hidden once more. “When the drakes attacked the chapels, I rushed in the fight, trying to help defend the people.”

When Donbenn smiled, Granthurg shook his head and continued, “I got into a bad fight with a drake. That’s how I hurt my leg. We ended up across the street in the river, wrestling.”

Shollburn’s eyes were wide and expectant, “Then what?”

“Well, I had dropped my hammer, so I grabbed the dagger and stabbed the beast in the leg.”

Both brothers looked at Granthurg, waiting. “And…”

“And nothing.” Granthurg finished. “It died, and I crawled out of the river. I haven’t seen any of my friends since.” Granthurg’s face flushed, and his eyes burned. He grabbed his tankard and took a long drink. He leaned back and turned away, not wanting his brothers to see him wipe his eyes.

As he lowered the drink from his lips, the stein shattered, spraying ale and ceramic shards over his face. He heard Shollburn hiss out a muffled shriek as the crossbow dart that had struck the mug buried itself deep into the base of his throat.