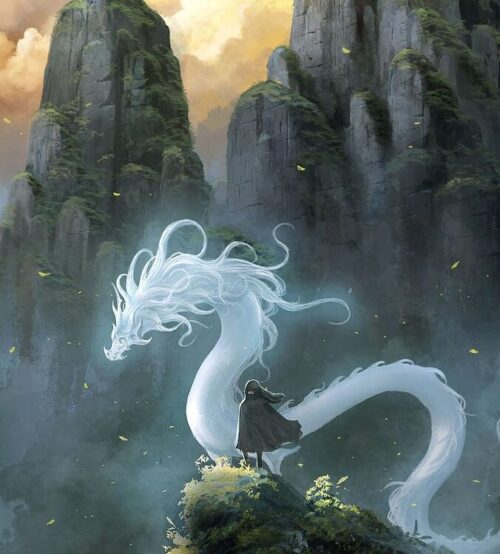 She stared into the heart of the oculus, its red and orange facets flashing bright reflections in the sunlight. The rays, mostly crimson, but with prismatic glints of yellow and even blue, shined onto her face as she turned the gem in her fingers.

“Thissraelle?” The voice in her ears was deep and rough.

Eddiwarth has one like this, I think. I saw it on his table once. His face slowly formed in her memory. She envisioned his longish and curly hair that he could never seem to quite comb right, his lips that so delicately formed his lopsided smirk, his eyes that glistened with mischief when he laughed his lopsided laugh…

Her eyes drifted up from the gem to the blue morning sky, and to the whisps of faint clouds that drifted past the snowy mountain peak where they stood.

A rumbling growled up from the ground, like the mountain itself was a touch woozy with indigestion. She snapped her eyes back and glanced around her feet. The rock below her suddenly shook and she flailed her arms out to her sides. She couldn’t keep her balance, however, and toppled backward into the snow with a shriek.

“Oh! That’s cold!” She screamed, thrashing her legs in the air and trying to untangle her arms from her cloak. “There’s snow down my neck!”

Heathrax’s huge dragon head loomed high up above her, looking down and swaying side to side in the air. He seemed to have a bit of a smirk on his scaly lips.

“What did you do that for?” She finally was able to sit up in the snow and began shaking it out of her shirt and her cloak.

A laugh rumbled deep in his throat as he turned away. “If you had been paying more attention, you would have been ready for that.”

She sighed, and climbed to her feet. “I’m sorry. I guess I deserved that.” She shook out her cloak. “Aw, flames! I dropped the oculus.”

Thissraelle sighed and ran her fingers through her hair. Her breath misted before her cold pink nose and she sniffled. She raised her hand and slowly swept it left to right. The red gem leapt out of the snow and hovered for a second, then flew to her palm. She stuffed her shivering hands into her cloak pocket.

The big dragon huffed out a large puff of chilly fog and smoke from his own nose. “Fly with me, and tell me why.” He lifted his massive body off the mountain and began snaking his way through the air on the shadow side of the peak’s jagged ridge.

Thissraelle jumped up into the air and floated along behind him, hurrying to catch up. “Did I tell you last week that Karendle left with her father?”

“Yes, you mentioned it. You said you were happy for her.”

They dipped down below the shadow line as they neared the entrance to Heathrax’s cavern. She went on, “I miss her. I miss her much more than I thought I would. It’s only been a few days, but I counted on her being there when I was done studying with you each day. The house is much emptier now.”

“What of your parents?”

Thissraelle laughed sadly. “My relationship with my parents is…” she sighed, “is a big part of why I left Twynne Rivers in the first place. Or, maybe it’s better to say that the lack of a relationship is why I left.”

They floated slowly into the huge main chamber, and Thissraelle waved her hand, blinking all of the crystal oculi alight. As they settled onto the floor, Heathrax laid down and rested his clawed hand in front of him. Thissraelle landed and sat on his forearm.

“The hardest part is that, with nobody there, I’m really starting to miss Eddiwarth.” She pulled her knees up and rested her hands and her chin on them. She murmured, “Really, though, what I’m seeing is how much I’ve missed him all along.”

Heathrax curled his tail around protectively, and set his chin on the ground before her. Her shoulders felt heavy and she glanced at her feet.

“Dragons,” he said, in a quiet wheeze, “don’t usually have the same concept of love and family that you hominids do. We pair off and mate, it’s true, and the ladies of our kind lay clutches of eggs. But the pairings aren’t permanent. The eggs are large and strong, and usually hidden well. When the eggs hatch, the parents are not there. The young dragons must find their own first meals, take their own first steps, and, several seasons after, open their wings for the first time.

“We don’t tie ourselves together emotionally. Most of the time.”

His eyes moved up and took on a distant look. “Once I was exiled to these mountains, I was isolated. At first I enjoyed the solitude, but after a few winters I began to be very lonely. But there was one particular dragonmare that I had known before. She visited me from the south of Umbrawood. Axinta was her name. She was a beautiful flowing green, a dragon of the woods. Every spring we flew together, year after year. I never knew why she always returned to me, but I also never questioned. I just counted myself lucky and enjoyed being with her. What a beauty. What a mind.”

The old dragon closed his eyes for a moment.

Thissraelle hesitated, not wanting to break his thoughts. Before she could ask, he hummed a little sigh and recited:

“My lady, my dragon of the forest
With feet as roots, a back as the tree, and the wings as leaves on her branches
And I, an exile, alone in the mountain
The peaks as my spine and the cold wind my breath
Yet ever the spring brought us together.”

Thissraelle knew that dragons couldn’t cry, like elves or humans do, but her own eyes burned. She sniffed. “What happened?”

“The great dragonpox happened.” Heathrax replied, then coughed. “One spring, she didn’t come. I went looking for her, but the pox had taken her, like it did so many others.” His head rolled a little bit to the side. “I have not mated since. I can’t even bear the thought. I know loneliness all too well.”

He sighed, “Listen to an old lizard; when you find a pool of love, drink it deep.”

Thissraelle leapt off the dragon’s arm and tried to wrap her arms around his massive neck. All she could do was reach up and down, like she was trying to embrace the trunk of a huge fallen tree. That didn’t matter. She just pressed her cheek against his tough scales and cried for him.

Heathrax writes poems from time to time, as mentioned in past scenes (here and here), and Thissraelle is often very touched by them. He uses an ancient form of the dragonkin language and literature. Each poem, or stanza, has five lines, each with a purpose. The first pair and the second pair form couplets. Often the first will set up a scene or a story, and the second couple will add to it. The two lines in the couplet reinforce each other, a sort of “rhyme of meaning” instead of a sounding rhyme. The last line is short, impactful, and delivers the point of the whole poem. If there are multiple stanzas, the final line might repeat, or be similar with a rhyming message.

So, give it a try! Write your own dragon poem, and post it in the comments! I’ll pick a poet and send them free copies of the books.