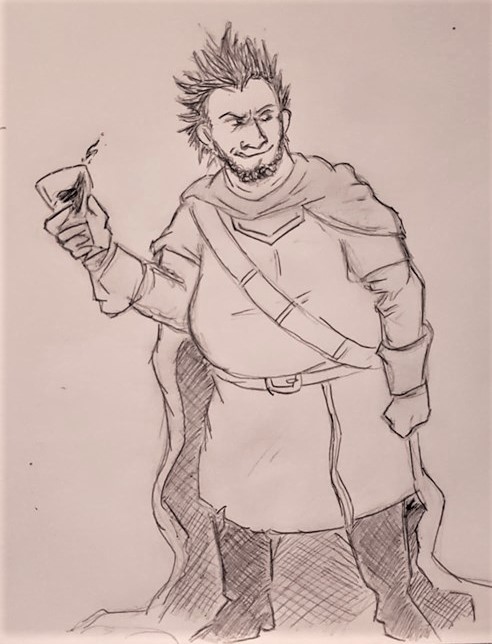 Tonklyn paused at the top of the stairs, breathing heavily. He leaned hard on his staff,  the oculus light swinging from its tip casting wide shadows that spun and waved with each breath. He straightened and drew his shoulders back, then strode along the hall to the throne room.

I need to hurry! What time is it? Tonklyn had spent most of his days in the dim caverns of the Palace of the Dragon Kings, ever since he had returned from Emberfire with the other dragon recruits. Since Kirraxal liked to keep the lights dim and cool, it was often hard to tell the progress of the day.

There was so much to do, preparing to bring down the kingdoms of Wynne! So many things to plan, so many preliminaries. The hardest part was getting enough people and dragons on board and in place while still maintaining secrecy. Tonklyn’s heart raced, and he wasn’t sure if that was because of the news he carried for Kirraxal, or because he was running in heavy dark ministerial robes. Either one could be the reason. Maybe it was just his own stress.

This will make His Majesty pleased! Kirraxal had a talent for finding the flaws in the most careful of Tonklyn’s plans, and griping impatiently even when things were done on time. He will welcome the news and finally see that I can deliver.

He laughed to himself. My life has gone from being an errand boy for one king to being errand boy for another. At least this king will truly rule with fire! And then I will be more than just a pageboy. I am his Chancellor!

As he approached the great door of one room, the guards barely had a moment’s notice to jump up and pull them open before Tonklyn pushed on through. He strode in and heard a fast and heated discussion from up near the dais. Kirraxal was there, speaking with two other dragons, Telix and Exakas. Their words were not quiet, but between the distance, the echo of the high chamber, and the fact that they spoke in the old dragon tongue, Tonklyn could only make out a few of their words. They’re talking about the Wood Elves. I wonder if they’ve decided if they will hit them or the capital city first.

As he approached the dais, he made no attempt to quiet his footsteps, nor the tapping of his illuminated staff. He held his head high and straight. This news will show him, and restore me to status beside him.

The dragons quieted themselves as they noticed him approach. Kirraxal’s huge dark eyes narrowed with irritation. “Chancellor,” he rasped, glancing at the other dragons, “what are you doing? There had better be a good reason for this interruption!”

“Oh, but there is, Your Majesty. I just received word from the high priests of the Dragon’s Flame in Twynne Rivers.”

Kirraxal glanced at the two other dragons before Tonklyn continued, “This is news they will want to hear as well! The Dragon’s Tooth Dagger is now in our hands!” Tonklyn smiled proudly and glanced at the two dark-cloaked dragonbonded soldiers standing sleepless guard by the dragons. Yeah, that’s right. I got it, and you didn’t! The soldier’s total lack of emotion made the taunt ring hollow in his head. He smoothed his robe and adjusted his sash.

At the announcement, all three dragons raised their heads and brows. Telix exclaimed, “This is excellent news! Humans will be hard pressed to resist us, now!”

Exakas face, though pleased, was a little more reserved. “There are still wizards who can do us battle, and the dagger, while a danger, can only kill one dragon at a time.”

“Yes, but while it is loose in the realm, none of us are fully safe.”

Kirraxal humphed. “It’s in our hands? I don’t see it yet. I will rest better when I can see it here on my throne room wall.”

“Then I’ll go to the city and retrieve it for you!”

Kirraxal looked at him with a sharp and narrow glare. His throat grumbled as he thought this over. “One of the dragonbonded is in Twynne Rivers now. He can bring it.”

Tonklyn sucked in a sharp breath. “But there is a lot to be done with the Dragon’s Flame there. Plans for the coup must be made and the city itself is being prepared. I’m told that King Twynnham has been ruling more and more by hard force and the populace is getting angry. The acolytes have been working diligently to turn the populace and many now see you as their savior from the growing tyranny. Could you imagine that? The peasants cheering as you burn the palace?”

Kirraxal laughed. “You humans… you will always amaze me.” He waved a hand at Tonklyn and turned his attention back to the dragons.

Tonklyn smiled and bowed. He backed away, then turned and strode quietly out of the hall. Yes. We are very amazing.

I’ve had a lot of fun with Tonklyn as a character, especially with his interactions with Kirraxal. Do you have villains and antagonists in your life? People who always seem to be getting in your way? What are they like? How do you deal with them? Post a comment and share your story!