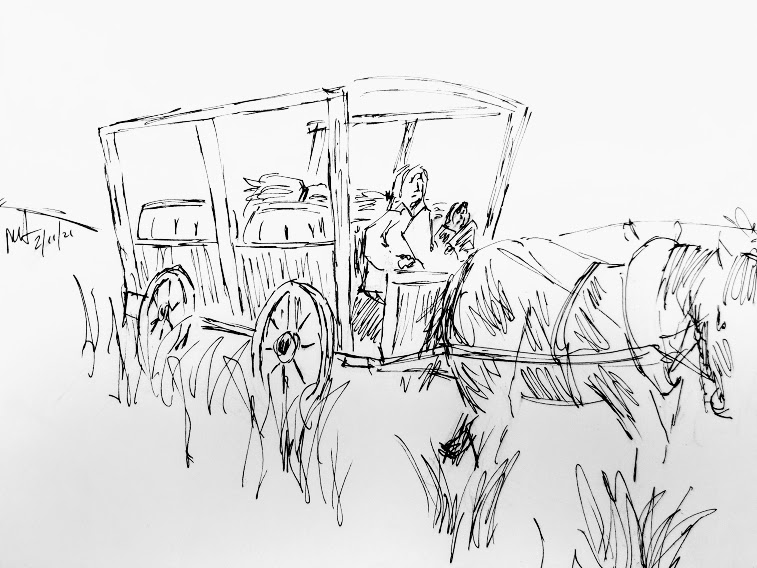 Illariel stretched her toes out in the grass and the sun. It felt good to have her traveling boots off, even if for just a moment.

“I had just figured you’d want to stay in Umbrawood. Well, for what it’s worth, I’m glad you decided to come with us.” Eddiwarth said, “Where is Ari, anyway?”

“She’s hunting down in the meadow.” Illariel raised her head to look out over the low hilltop and down into the gentle rolling shallow between them and the next hill. The afternoon breeze through her hair was a welcome cooling contrast to the bright warming sun. Eddiwarth looked as well, but apparently didn’t see the giant spider rustling through the flowers and grasses. Looking to a more distant hill, she saw her arachin friend moving along in zigzaggy jumps. After such a harsh winter, and the rains that usually come with the early spring, it felt nice to her to have a relatively warm day in the sun.

They sat, resting, eating their dried fruits and jerky near the parallel trails the wheels of passing wagons had worn in the brush. Parith was catching a short nap on the hill beside them under the shade of a small tree, while Korr practiced his forms in the meadow off to her right.

A quick chill blew over her. “I have to admit,” Illariel mused, “I’m kinda nervous about it all.”

“Really? Why?” Eddiwarth was a bit surprised. “I’ve noticed you’ve been a bit more quiet today. I was afraid you’d run out of things to talk about.”

She shot him a sarcastic sneer, then sighed, “I’ve spent my whole life in the forest. I know the branches and I know the trees.” She looked away. “But the biggest village I’ve ever seen is Treehaven. I’ve never even been to Umbrawood City. I’ve heard stories about Twynne Rivers. It’s a dangerous place.”

“What?” Illariel asked, “I’m serious! What’s so funny?” She pushed Eddiwarth over.

He rolled back up and Parith stirred on the ground. The distant sounds of Korr’s kiai drifted past their ears.  “When I grew up in Twynne Rivers,” Eddiwarth said, still chuckling, “We thought Umbrawood was a terrifying place full of beasts, monsters, and spirits. Especially the deep woods. If anyone went there, they stuck close to the roads.”

“So,” Eddiwarth grinned, “It’s just funny to hear you be afraid of the city. Besides, You’re best friends with one of the biggest, scariest monsters I’ve ever seen. Well, except for the dragons.”

Parith sat up. “Actually, I’ve been wondering about that.”

Illariel glanced over at him, her eyebrows raised. “About dragons?”

Illariel looked away and took another bite of bread. Korr had finished his practice and was walking up the hill toward them. As he joined them, he stood looking westward down the trail. Eddiwarth turned his head to see what he was looking at. A large, clumsy wagon and a horseman loped easily along the path.

Eddiwarth stood to get a better look over the hilltop and the underbrush while Illariel turned in the grass. The wagon was old and rickety, and now that she had noticed it, she realized that he had been hearing its wheels creaking faintly in the distance for a little while, now. There were two people at the wagon seat holding the reins of a single horse, a middle-aged man and a younger girl. She wore a simple dress with a blanket around her shoulders. Behind them the wagon carried stacks of bound sheep fleeces and several large ale barrels tied together.

As they drew closer, Illariel noticed that the rider at the side of the wagon was another girl, not a man, as she had first assumed. Her hair was cropped a bit shorter than the younger one’s, and she wore a long but ragged riding cloak.

“Hail!” The man called out to them, pulling the wagon to a stop. “This looks like a good spot for a rest. May we join you?”

Eddiwarth stepped forward. “I think we were just preparing to carry on. But yes, it is a nice place, and you can have it.” He gestured to the shade under the tree.

“Daddy, look!” The younger girl chirped, and pointed. “They’re elves, like the ones you traded with last winter!”

Parith chuckled and rolled his eyes.

Illariel jumped in, “Yes, I do! Well not so much when I’m traveling with these guys, but usually, I do. I’m from the northern forest. The trees are really big and tall there. They’re a lot shorter here in the south, but they’re still pretty big when you compare them to scrubs like this one here…”

The little girl’s eyes grew wide with excitement. “Can I touch your ears? Daddy wouldn’t let me ask the others.”

The girl went quiet and dropped her head, murmuring, “I asked politely.”

Illariel smiled big with a bit of flush on her cheeks. “Of course you can!” she said, and stepped up to the wagon with her hand out. “Come here!” Without waiting for permission, little Maryin tossed off her blanket and jumped off the wagon. Illariel stooped down, giggling with the girl.

“They feel just like mine!” The girl shouted, her hands darting from Illariel’s to her own and back, “only pointier! That’s funny!”

“You know what else feels funny?” Illariel asked

“THIS!” Illariel shouted, reaching to tickle the girl’s tummy. The girl squealed with laughter and rolled away on the grass.

The father sighed, shaking his head, and settled the reins. “I’m sorry. She’s an impulsive one, she is.”

“Not to worry,” Eddiwarth assured them. The older girl dismounted, then led her horse to the wagon. Illariel saw her smile at Eddiwarth before the little girl jumped up onto Illariel’s back and toppled her to the soft meadow floor.

“Let us at least share our lunch with you. We have bread, apples, and some cheese that’s been aging all winter.”

Eddiwarth shrugged and looked at his companions. Korr nodded and Parith didn’t complain, so that was a good sign. Illariel was on her hands and knees playing with the girl, who giggled loudly. When he looked back up to the wagon, the man was already climbing down with a basket on his shoulders.

A few moments later, they all sat under the tree eating. Illariel sat with her new friend, and the older girl sat between them and Eddiwarth, who looked more than a bit nervous. He’s in a tight spot, there. To make matters worse, Parith is going to tease him bad for this!

“The village of Larnisboro is not far,” the father said. “We’ll get there by the end of the day, easily.”

The man looked at him, confused, and the little girl and her sister giggled. “Is he speaking elvish?” the little sister speculated, making Illariel blurt out laughing. Parith rolled his eyes and swallowed. “Is there a waterfront there?”

“Oh, sure. It’s a small town, but there’s a barge dock. Here, have some more.” The man tossed another apple at Korr, who nodded and picked it up.

“We’re on our way traveling to Twynne Rivers.” Eddiwarth explained. “We hope to catch a barge for the rest of the way.”

“Too bad you’re not staying for Vernalfest! That’s where we’re going.” The older girl said, smiling at Eddiwarth. “It’s always a lot of fun!”

Eddiwarth looked away quickly and Illariel smiled to herself. I would love to be a leaf on the tree when Thissraelle hears about this!

“Yes! Can they come with us?” The young girl grabbed Illariel’s arm, and begged, “Please? The people in the town like elves, too, don’t they, daddy?”

Illariel gently drew her arm back after having been shaken from side to side. “Yes, well, ah… How do they like spiders?”

For a lot of my life, I used to have a kind of fascinated fear and respect for them. If I found a spiderweb in the wild, I could admire it and avoid it. But, if one of the beasts got near me, I would freak out.

Last year, when I first started writing about Ari and Illariel, I had to do a lot of research, especially into jumping spiders. I wanted to make the arachins fantasy, but based in reality. I learned a lot of fascinating facts. Like, I learned why spider legs curl up when they die.

Anyway, I found myself not being afraid of them so much any more. I still don’t think I want one as a pet, but at least they don’t freak me out.