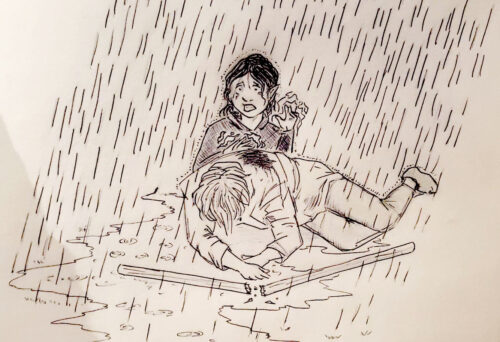 “Parith!” Illariel called out. As she sped down a stretch of alley, looking all around, her wet hair flipped against her sharp elvish ears and stuck to her forehead. Her boots splashed through the water flowing over the stones of the street.

By the Creator’s flaming forest, I will kill him if I find him!

She reached out and felt the rough daub wall of the building by her side. Its texture was wet, bumpy and a bit stony, like the clay that potters used, but not as fine. What IS this? This place is so strange! I can’t see a single tree! Where in flaming creation am I? She sucked in breaths, trying not to let fear drive her pounding heart.

She glanced up, letting the rain fall on her face. Her eyes burned and her shoulders shook, but the rain hid her tears.

“Come on, Ari, let’s go!” Illariel looked around only to see an empty alleyway shouted in shadows. “Ari?”

The rain dropped off her forehead and ran down her neck. She tried to breathe, but her chest was frozen. “Ari?” She forced the name out, but it sounded more like a raspy wheeze than a shout. The walls of the structures on either side of her suddenly grew hundreds of feet high, and they looked like they leaned over her, scowling down on her like hungry scavenger crows. She peered down the alley, and the cobblestone seemed to stretch out before her.

Somewhere in the distance behind her a dog started barking. Illariel jumped with a shriek and ran, her feet splashing through the puddles, pounding on the stones, like the pounding of her heart. She wanted to scream, but her throat burned. Where is Ari? I can’t smell her! I can’t smell anything past all of this garbage!

The path abruptly came to a T, and she slid and almost fell. It was much shorter than it had appeared a few moments ago. She flipped her head from side to side, trying to see which way looked familiar, but wet strands of hair got in her eyes.

Something large and dark landed with a thump and a splash on the street just to her right. Illariel screamed and jumped away, losing her footing and falling to the stones. The huge form jerked toward her.

Illariel suddenly smelled a strange mix of fear and relief, followed by the sharp odor of worry.

She swept her hair from her eyes. “Ari!” Illariel scrambled to her feet and wrapped her arms as much as she could around the arachin’s dripping head. For a moment, Ari returned the embrace by reaching across Illariel’s back with her forward palps.

Ari backed away, chittering and stomping, emitting the scent of fear and worry again.

Illariel gasped, her hands over her mouth.“Oh, no! Where is he? Take me there!”

Ari spun and jumped away, and Illariel hurried to follow. She splashed her way through a series of corners and dark buildings, trying her best to keep up with the leaping spider. Finally, she saw Parith’s limp form lying on the street, chest up. Ari stood waiting beside him, stomping and shifting back and forth in an anxious dance. Illariel shrieked and rushed over to kneel in the water beside him.

She shook him side to side. “No, no! Get up!”  Rain streamed over his cheeks and down into his shirt. Please, Creator, he can’t be dead. Don’t let him be dead.

Parith rolled his head and coughed. Blood trickled from his lips as he moaned.

“He’s alive,” she said, finally allowing herself to breathe. “He’s alive, Ari!” She moved his cloak aside to see his shirt coated in diluted blood and she gasped in horror. Her mind raced alongside her heartbeat. What do I do? What do I do?

Ari hissed and chittered an answer to her silent question.

“Yes, I know he’ll die!” Illariel tried not to scream. “I can’t do it! I use natural magic! There’s no nature here!”

Illariel burst into sobs. All of the fears and anger and pressure she’d been feeling flooded out of her like a swollen raincloud and she tipped forward, shaking, to rest her head on Parith’s chest. Gasping and wailing, she sobbed, mixing her tears with the rain and blood flowing onto the cobblestones below her. “I can’t heal him. I can’t.”

Ari touched her again, gently patting her back in the same awkward way she always did. The spider let out a low whistle. Illariel sucked in a gasp between her sobs and raised herself up. “When I healed you, there were trees and roots and open air and earth. Now, I’m boxed in with buildings and roads and I haven’t seen a tree since yesterday.” Illariel rested her hand on Parith’s chest. “There’s no life here to give to him.”

Ari hissed loudly, stomping on the cobblestones. She smashed her foot hard onto the stones of the alley. Over and over she hit the rocks, throwing splashes of rainwater everywhere around it.

“What are you doing?”

Ari stopped, and Illariel saw that the spider had dislodged the stones, revealing the dirt below the street. The spider kept clawing at the rocks, tossing them aside. Rainwater quickly flowed in, soaking into the mud and making a pool in the gap.

Earth. Water. Rain. Of course. There’s nature all over. The wood of the buildings is cut and stacked, but it’s still from nature. She reached out around her with her hands, sweeping them from side to side, searching deep in the world around her. She let her own will rise, and felt the warmth swell up inside her. Slowly, at first, but then it grew. It felt strange against the harsh cold of the spring rain, but also somehow felt… well… natural. Each drop of rain fed into the pool of her will. Each stone, each grain of dirt gave her more life and energy. Her hands began to glow with the green of living leaves swirled with the brown of earth. She smiled and the warmth and glow completely overtook her. She threw her palms down, smacking them onto Parith’s unmoving chest and let the light and life surge into him. She felt it surrounding her, surrounding him, flowing through them both.

Parith coughed and raised his knee. He reached up a hand, nearly smacking Illariel, but moved to wipe the rain from his face. He rolled away, coughing and gasping at first, then just breathing.

Illariel sat back on her knees, the glow fading. In its place was a comfort, a relaxation, a tiredness, a oneness that she hadn’t felt in a while. She looked at Ari with a big smile. “Thank you!” The spider just dipped its head.

Parith tried to sit up, and Illariel leaned in to help him. “Can you stand?”

He didn’t respond, but managed a weak smile and an attempt to get up. It wasn’t easy, and Illariel’s thin young frame didn’t help much. He reached out and grabbed onto one of Ari’s legs. With a struggle, Ari helped lift him up onto her back.

That done, Illariel looked around, finally taking in the surroundings. “We’ve got to find somewhere to shelter out the night.” She reached over Ari’s back and pulled Parith’s hood up over his head.

Ari chittered a suggestion. “Ok. Lead us there.”