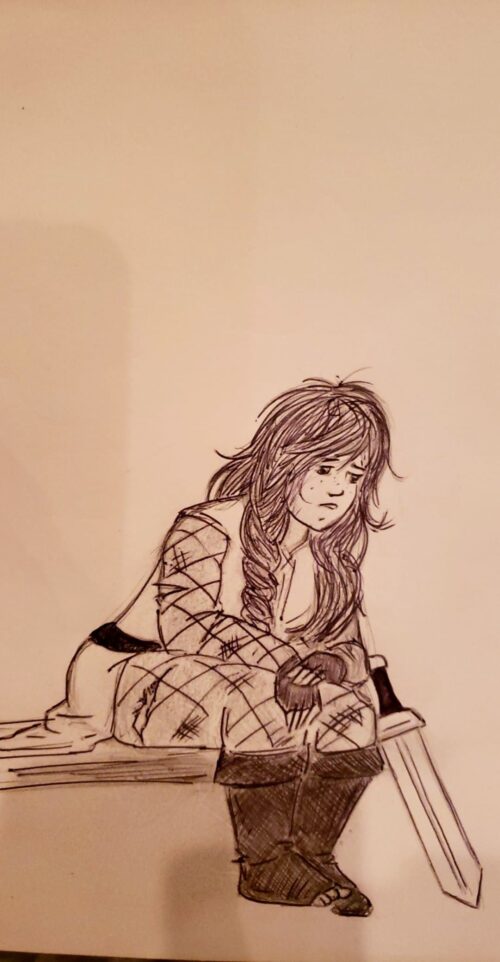 Shylai’a recognized the rhythmic tramping of booted feet even before she saw the rows of green and red liveried soldiers advancing down the street. She saw the maple leaf crests on their backs, and right away knew who they were. She had worn one of those crests on her own gambeson only a few short months ago.

House Kaelig! They must be on a raid. I can’t let them see me! She spun on her heel and began walking steadily in the direction she had come from. Pulling her hood up and keeping her head low, every step brought her closer to the anonymous safety of the roadway. She glanced furtively right and left, hoping for a gap between the shops and homes, or maybe a wagon she could duck behind.

Her cloak flipped open in the air as she strode, revealing the green padded armor that she, herself, was still wearing. She cursed and pulled her cloak folds closed, trying to cover the tunic. They’ll recognize the cloak, too, so I’ve got to get out of sight!

To her right she saw a doorway inset into a building. It was probably a secondary entrance to the inn, since it was unmarked. It was set back into the structure a few feet with a slight stone porch and steps opening into the street. Hearing the marching cadence closer behind her, she lunged into the doorway and sat down on the cold wet stone steps. She tucked her knees up under the cloak and kept her head down, but not so much that she couldn’t peer out from under her hood.

As quietly as possible, she slipped her sword out of its sheath and held it hidden under the heavy cloth. Best be prepared…

Almost immediately, the other people on the street scurried aside and two long columns of soldiers marched by. Their tunics and padded armor were new and crisply sewn, each the vivid green of House Kaelig. Some rows carried spears, others were swordsmen. Shylai’a held her breath, wanting to look like she had slept all night huddled in this doorway. As the soldiers passed, she watched closely, but didn’t recognize anyone from her cohort.

More than a dozen men marched in each column, and after a long awkward moment they were gone on down the street. The people on the street nervously stepped back to their tasks, keeping a wary eye out for more soldiers. The King had not yet declared martial law, but he might as well have.

Shylai’a raised her head and leaned forward to check up and down the street. Where soldiers go, a fight will follow. She heaved out a big sigh, and it misted a little in the morning chill. Her sword blade tapped lightly against her leg and drew her attention. The hand holding it shook a little from the last of her fear as her heart slowed back down. She tossed off her cloak and leaned the sword on the stone next to her leg so she could stretch the tension out of her fingers.

Courageous! Me? Who is he fooling? I’m on the run, hiding on the street. This is no way to live. She ran her hand through her straggly hair. Who AM I hiding from?

Angry shouts reverberated off the buildings from down the street. The clang and ring of steel against steel added a rhythmic melody to the chorus. The fight will follow… The people in the street froze in place, then began scurrying away from the noise. Shylai’a raised her head, staring intently. That sounds close. Really close.

Shylai’a stood, then grabbed her cloak and sword and ran into the street to flee like the others. I don’t want to be anywhere near this fight. Just as she resheathed her sword at her side, she heard a child scream, “Momma! Momma!” Other shouts, mostly men’s voices, followed immediately after, a bit more distant.

Shylai’a spun around. A peasant woman in a ragged blue and brown dress stumbled up the slight slope of the curving road leading from the burned out ruins of the old chapel on the Riverfront street. Two men in green and red broke from the melee at the bottom of the street and chased after her, bloody swords swinging with their arms opposite their lunging steps. Just a few paces from Shylai’a, a young child in a long shirt and dirty bare feet ran down the gentle cobblestone slope toward the woman. “Momma!”

“Toddy! No!” The lady shouted at the child, “No! Run away, Toddy!” The little boy didn’t stop.

Shylai’a’s glare bounced from the lady’s terrified face, to the angry grimaces of her pursuers, to the child’s upstretched arms. One of the men caught up with the lady and swung his sword hilt, smacking her head with the pommel. The child screamed again as he watched his mother collapse onto the wet stones.

Her hands choked her own sword hilt with anger. No! By the breath of the Creator! No!

Shylai’a dropped her cloak and rushed at them, her stride gaining momentum with the downward run. A growl thundered up from deep in Shylai’a’s throat, bursting forth only seconds before she vaulted over the fallen lady and piled, shoulder-first, into the surprised soldier’s chest. They fell to the street together, and the soldier blew out a deep grunt as Shylai’a landed hard on top of him.

Shylai’a rolled off the winded soldier and jumped to her feet. Even before she could grab a breath or instinctively set a stance, she jumped forward at his comrade, her blade back and ready. She screamed out her rage and thrust it with all her might at the maple leaf crest sewn onto his chest.