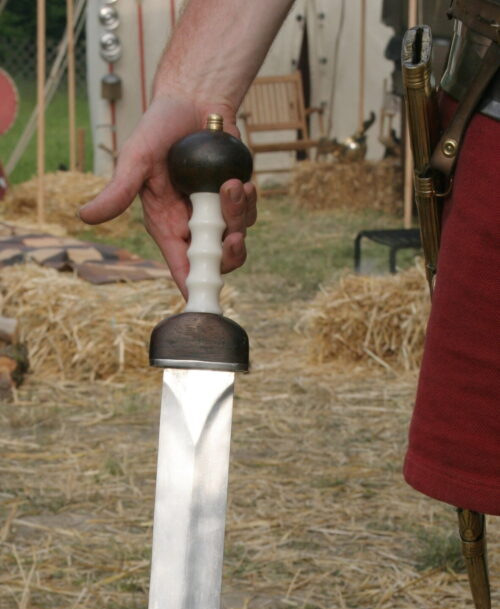 As Shylai’a attacked, the soldier easily parried her thrust with a sweep of his own blade. She jumped to keep her balance as he swung in a counter swipe. His blade slid along her arm though the edge didn’t cut through the many layers of linen in her gambeson coat.

They each stepped back and took a moment to reset their stances. The soldier had a short-cropped beard along a rugged jawline that framed his confident half-smile. One of his brows raised as he looked her over with a sort of curiosity.

Shylai’a lost few moments before gritting her jaw and jumping into the attack. She swung quickly, her blade ringing against his parries, each grunted strike pressing him back. He finally jumped away, landing in a solid stance with a bit of a nervous edge to his smile. He breathed heavy from the exertion as her own heart pounded in her ears. Through his snarl, he taunted, “Where did you get that green Kaelig coat, little girl? Did someone kill your true love?”

Shylai’a felt her face flush with anger. She narrowed her eyes, then tried to breathe deep. I’ve got to keep my cool. I can’t let him get to me.

She forced an acidic smile, then snapped, “Do you like it? Your mom sewed it for me.”

She shifted her weight back and forth, keeping her sword defensively before her. She watched his eyes, looking for clues to his next move. When he didn’t give her any, she threw a feint. He flinched to block only to find that her slash wasn’t there. Instead, she shifted low and drove her sword point deep into his thigh, just below the edge of his padded jacket. He screamed a curse and limped aside, gripping his leg with a quickly bloodying hand.

Shylai’a started to advance on him, but a harsh pain hit her left shoulder. With quick instincts she raised her arm to deflect the attacker. The other soldier was back on his feet and swinging his sword. He laughed, then stabbed forward with a lunge. Shylai’a easily parried the thrust away with the sword in her unhurt arm and jumped back. Looking past her attacker, she saw that the woman and the child were gone. Good! They’ve escaped!

She glanced down at her shoulder, expecting to see blood, but it looked like the sword hit hadn’t cut through the gambeson sleeve. That’s twice it’s saved me today. She felt the pain deep as she flexed her arm, though, and realized that it would have left a deep bruise. The soldier’s motion snapped her attention back to blocking and dodging his strikes. Her blade rang and scraped with each parry, first left, then right. She tried to keep her balance with her off-sword arm, but the muscle hurt too much to move more than a little.

The soldier pressed forward with steady attacks, the sun reflecting off of his sword. His face was streaked with sweat. He sneered, “You should just turn around and go back to your kitchen!”

“Yeah, well–” Shylai’a’s retort was cut short as her back-facing foot slipped into a hole in the street where a cobblestone should have been. Her knee buckled outward and with a shriek she went down onto her back, her arms flailing. Her hip hurt from the twist of her leg and one of the stones in the road pressed hard on her spine.

In a moment, the soldier stood over her, his sword held high. His face contorted in an angry smile, he shoved his sword down at her chest. She rolled as far as she could to her left and barely avoided the hit. The sword rang on the pavement, and the force of the stab wedged the tip deep into the gap between the cobblestones. “Flaming shaking stones!” the soldier shouted, trying to pull it free.

Shylai’a hurt all over. Her hips were twisted, her arm badly bruised, but she winced through the pain and wove her fists together. With a grunt of exertion, she swung her fist behind her attacker’s leg, sweeping it free and toppling him straight back onto the street, where he landed with a grunt.

Shylai’a scrambled to her feet and grabbed the hilt of his sword, standing like a leaning flagpole stuck in the street beside her. In one fluid motion, she hauled it downward and to her left, freeing the blade and flipping the stones across the street with a clatter.

She swept it before her, then stood, stooped, with the blade gripped tightly in her two hands. Her knees were bent and shaking, but ready to lunge. Sweat dripped down between her scowling eyes and she tried to blink away the sting. She drew her breaths in heavy gasps between hard gulping swallows. Her heartbeats pounded with furor in her ears. The soldier, seeing his blade shaking in her determined hands and the clench in her jaw, tried to scamper away on his back.

She stumbled forward. “Get back here!” she shouted, “so I can bake you into a pie!”