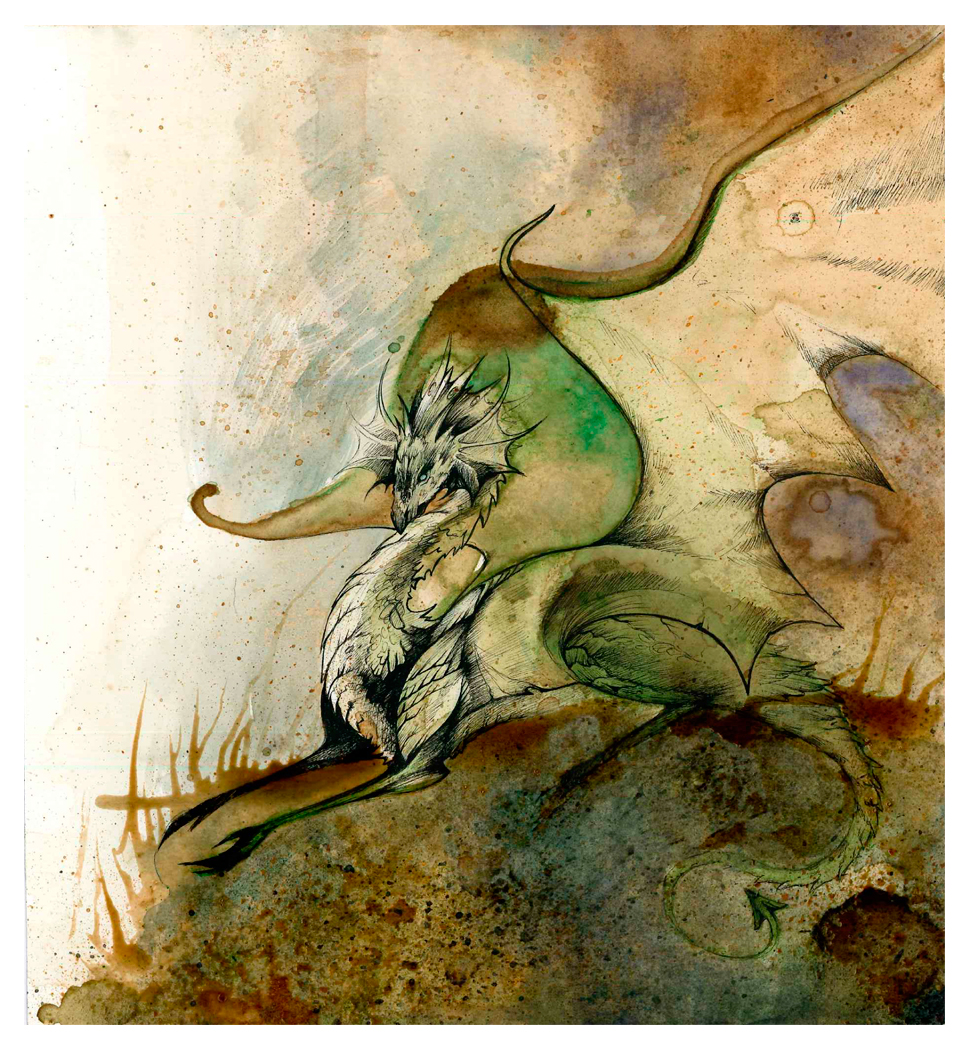 As the last part of the story opens, Tonklyn surprises Kirraxal and the other dragons in the Graemal Mountains by telling them that the leaders of the Cult of the Dragon’s Flame have secured the Dragon’s Tooth Dagger. The feared weapon that instantly kills any dragon it wounds is now in their control.

As Illariel and the giant spider, Ari, travel from the Academy with Parith and Korr, they stay in a small farming town to celebrate Vernalfest. Initially frightened of Ari, the people soon accept her and Illariel as she uses her nature powers to bless their fields. Parith does not like the attention this brings to the party, preferring to travel incognito. One rainy night, Eddiwarth is surprised when Thissraelle declares her love for him using an oculus to communicate. She had learned from Heathrax to treasure love and welcome it.

The party finds a barge to take them to Twynne Rivers. It’s still raining when they arrive, and Illariel and Parith wait until night to sneak Ari off the barge and into the shadows of the alleys of the city. They get separated, however, and Parith is attacked by thieves. He is severely wounded, but Ari finds him and leads Illariel to his side. Ari reminds Illariel how she had healed Ari as a tiny young arachin, but Illariel doesn’t feel like she can do it now, in the city. However, she summons her will and heals him, and they find a burned-out abandoned chapel ruin in which to wait out the storm that night.

Shylai’a is again living on the streets ever since she deserted her squad at the execution site. She has been trying to live, all the while avoiding the increased presence of soldiers on the streets. She meets the Mad Prophet again and runs from him. Unfortunately, she runs right into a fight where House Kaelig soldiers are attacking the peasants of the street, presumably to ferret out some insurgents. Shylai’a joins the fight and is surprised to meet a man who fights without weapons, and a giant spider with her wood elven friend.

“Sit and wait! Sit and wait,” the dark green dragon hissed. The scales of her skin sparkled reflectively in the moonlight. “They send me here to waste my time in the city with you two-legs while the dragon men plan the conquest.”

Tonklyn glanced up at her and smirked.

The moon had been full just a few days ago, and the few sparse clouds weren’t enough to hide it or the stars. They stood on a grassy meadow near the top of a hill, not too far from a dense grove of trees. The dragon kept her head low to the ground, ready to duck into the cover of the trees. She scratched at the grass with her long talons to ease her nerves. His carriage and driver waited for him a short distance away at the bottom of the hill. Further down the rolling dales sprawled the expansive city of Twynne Rivers, lit by thousands of lamps shining through thousands of windows.

Tonklyn’s gaze swept slowly back up from the city to the sky over the western grasslands. He wore his dark chancellor’s robe. Not only did it give him more cover in the night, but also more authority in the eyes of the dragon, he thought. He was, after all, the chancellor to King Kirraxal the first. Sometimes he felt like that title was the only thing keeping the other dragons from roasting him where he stood.

Tonklyn had already proven his worth to Kirraxal, many times over. The dragon was impulsive and had deep anger issues, but he was also sensible enough to see an advantage when it was before him. So, for now, at least, Tonklyn lived.

“Oh, Xintalan, you shouldn’t doubt your place with His Majesty.”

She snorted out a breath of hot smoke.

Tonklyn continued, “He intends to make you his Queen. You would rule by his side.”

“Queen. Hmph. Well, His Majesty had best show me the respect I merit if he expects me to fly with him and bear him egg clutches.”

Tonklyn chuckled. This is why I will always remain unmarried! He caught the tension in her scowl from the corner of his eye. At least I know where the wedges are between them. They could be easy to exploit.

“Look,” he said, pointing, “here come the others!”

Not too far in the western distance, they saw dark forms moving through the sky. They looked to be on a path that would pass them by, heading straight toward the city. Tonklyn raised his staff high up in the air and lit the oculus dangling from it. The sudden bright light shone on the hillside like the sun. Xintalan faced away and shielded her eyes. Tonklyn waved the staff a few times side to side, then extinguished the light.

“Thank you.” Xintalan hissed. “Now the whole world knows we are here.”

“Perhaps, so, perhaps not, but at least your cohorts do. See? They’re turning.”

They stood in silence for a time. Showing confidence while she fumes will keep her on edge. Tonklyn watched her fuss and shuffle while the other dragons neared. Finally, they circled, and with heavy flexing of their muscular wings, they landed on the grass with great winds and heavy thuds. Once their wings were folded away, Tonklyn stepped forward and gave a formal, yet shallow courtly bow. “Welcome, Ryxitt. And you also, Telix. I trust your flight was easy, and the sky clear?”

Telix shook his head to stretch his muscles. The dark blue underside of his throat contrasted with the vivid red of his spinal vanes. “Yeah,” his voice cracked with the popping of his neck, “it always feels good to be up in the air.” Ryxitt nodded as well and exchanged a quick bow with Xintalan. Tonklyn noted that she seemed pleased to be addressed that way by the old dragon. He didn’t speak, however, rather he just sucked in deep breaths.

Without waiting for any more formalities, Xintalan asked, “So where is Exakas?”

Telix stepped up to her and Tonklyn, shifting his neck in such a way as to make his deep blue chest scales more prominent. “He decided to stay back with Kirraxal.” He smiled at her and dipped his head down and back up in a strange move that Tonklyn guessed was the dragon equivalent of flirting.

Xintalan growled, then looked aside and huffed out a glob of flaming spittle. It hit the ground and began burning the grass around it. “Typically done,” she mumbled. “Send the old one and the little boy off to watch the lady while the ‘men’ make all the decisions. No surprises.”

She stomped off toward the trees. “You’d better put that fire out before it burns the whole countryside and gives away our position,” she said to Ryxitt, “but then in a few weeks it’ll all be burning anyway, right?”

Telix looked at Ryxitt, then at Tonklyn. If dragons could look nervous, his face would have had that very look. He quickly stomped out the growing fire, and the two of them followed her into the forest.

Tonklyn laughed and walked down the hill toward his carriage. As he stumbled down the bumpy hill in the moonlight, he reached under the folds of his robe and felt the hilt of the dagger. He knew it was there, but feeling it every so often made him feel a little safer.

Author’s Note: A Feminist and a Dragon?

As I write, there’s an interesting twist that goes on inside me, a struggle, maybe. It’s the back and forth banter between my personal will and the story I’ve planned, and the will of the character. This may seem odd, because people assume that I’m writing the story, so every character says and does what I want them to. But the best stories happen when the pull of the character’s personality tugs at the story and drives it into certain directions.

When I first created Xintalan, along with the other dragons in King Kirraxal’s court, I really had no plans for her in the story. I thought that it would be cool to give hints as to the unique personalities among these dragons, but I had no intention for them to become fleshed-out characters.

But, just like she’s turning out to be, Xintalan forced my hand. It’s like she refused to be silent and just watch the action. And guess what? That’s how her personality is shaping up. She doesn’t like how the men of the “guys club” of the dragons are treating her. She’s a feminist! I’d never read a fantasy with a feminist dragon (Well, you could make the case that a few of Anne McCaffery’s golden dragons are feminist. It’s been a long time since I read those).

Feminists in medieval-style fantasy are kind of interesting, too. I’ve spoken with some historians and found that the traditional opinion that women were owned as property is only partially true. Certainly in the nobility where marriages helped solidify kingdoms and fiefdoms that was mostly true, but among peasants, women often had much more autonomy.

Meanwhile, Xintalan, in spite of breathing the fire of a feminist, she’s got some work to do in other areas to be fully woke. She still is very prejudiced against the hominids, though that may change somewhat in the stories to come (spoiler alert?).

What are your thoughts? Do you consider yourself to be a feminist? Why or why not? Comment below!