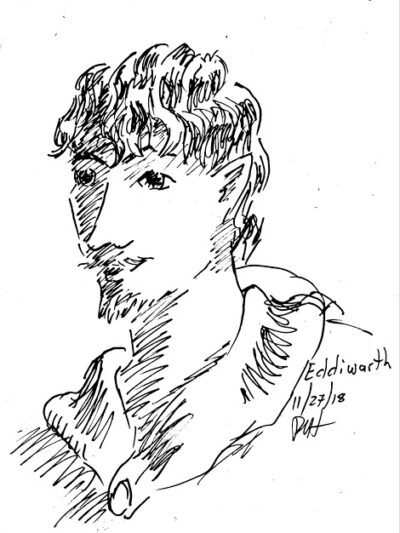 The rough faces on the raw-cut ruby reflected glints of the dim lantern light. Eddiwarth sat in a soft, deep chair next to a small wooden table where the lantern burned. He leaned forward on his knees and turned the stone in his fingers. Karendle said this gem is raw, unrefined, so there’s no magic in it. She also said that it’s got something in it. Inclusions? I guess that means it’s not pure enough or strong enough for the magic. How do they refine these? How do they become magical?

He straightened, leaning on the soft padded back and armrests of the chair. He crossed his legs and tossed the gem lightly into the air, catching it over and over. I should probably reach out to Thissraelle tonight. It’s been a few days. Maybe she’s heard from Granthurg, and we can find out what’s really going on.

Eddiwarth had been shocked when Parith had delivered this bit of news earlier in the day. The Dragon’s Flame has the dagger we’ve been looking for, and they’ve gotten it from Granthurg somehow. Yet nobody along the wharf has seen him. At least not recently. What happened?

Eddiwarth caught the stone one last time and looked at it as if he was trying to see if the answers to his questions were etched on its surface.

“You have a lot of interesting friends.” Mellar’s deep voice sounded from the room’s doorway. Eddiwarth looked up at his father, who stepped in. He wore a light tan wrap around his waist, with a panel of deeper brown hanging in front. It was shorter than the ones worn by the wealthy in Emberfire City, but still sharp and stylish, though frequent wearings and washings had made it less stiff and crisp. He eased himself into a chair across from Eddiwarth. “Your little brother sure enjoyed hearing all of their stories. The spider was… particularly interesting.”

Eddiwarth quickly slipped the gem into his pocket, then rubbed his hands on his pants, as if he could smooth the miles of travel and weather out of them. As he and Shylai’a had been eating dinner with his family, Parith, Korr, and Illariel had also arrived. After introductions, Eddiwarth’s mother had insisted on feeding everyone and had scurried around her now-crowded kitchen fixing more food. While they had been waiting, Parith had updated Eddiwarth. Somehow, after dinner, his mother had insisted that everyone stay. The house was quiet, now, with everyone bedded down in one room or another.

Before Eddiwarth could speak, Mellar sat down across the table and asked, “Tell me more about Thisraelle of Jaxil House.”

Eddiwarth’s eyebrows raised and he blew out an ‘it’s a long story’ sort of sigh. “Wow. I’m not sure where to start.” He thought for a minute, visualizing her smiling and working her magic on the mountainside. He could imagine her cold breath and her fine white hair blowing from under her cloak as she moved her arms to direct the power. “She’s amazing. She’s brilliant and beautiful. She’s brave and determined. She’s a far better wizard than I will ever be. Frankly, I wonder every day when she’ll decide that I’m not worth the wait.”

His father nodded. “Jaxil is the Wizard’s Guildmaster, isn’t he? That’s reaching for the top of the mountain.”

Eddiwarth dropped his head and nodded. He murmured, “Yes, he was.”

“Right. Was. Sorry. Still, I imagine he’s pretty well connected with society there in Emberfire.”

Recent memories of the elven city ran through Eddiwarth’s head, with scenes of Winterfest soirées where Jaxil had introduced Thissraelle to every eligible elf man in the nobility, and half the ones in the military. But she says she loves me. Doesn’t she?

“How did you get presented to her? Was there some formal dinner at the school?”

Eddiwarth coughed. “Actually, I didn’t get presented. The first time I met her properly was after the fight at the old manor house, where we rescued DeFrantis’ orphan kids.” She had been healing everyone as we hurried away. She’s always using her powers to help someone. His eyes got a distant look as he remembered, “Then later we all stayed at the monastery with Brother Mathezar and the others and when we went back to Twynne Rivers, we were attacked in the cathedral.”

Mellar looked confused, but Eddiwarth continued, absently, as if his father already knew the story. “…Then we got rescued from the drakes and spent some time in the Vast. I’m not sure how long, but time isn’t very consistent there. When we came back out it was nearly winter. We went looking for Heathrax and we almost got killed in Umbrawood.”

“Yeah, a few times.” Eddiwarth glanced up and wiped his hand down his face. “Between the wood elves and the high elves, it was a bit of a mess. Plus the Dragon’s Flame cultists were chasing us. We ended up in a big fight with a couple of full dragons at a hot spring in Emberfire. That was when Heathrax found us.” Eddiwarth returned his focus and saw the stunned look on his father’s face. “What?”

Eddiwarth shrugged his arms and raised an eyebrow. What’s he getting at? “Y-yeah… And…?”

“And now you want to marry the daughter of the Guildmaster.”

“Well, we haven’t actually talked about marriage, yet, and he’s technically not the guild master anymore. I think he’s into gems and oculi, now.”

“That’s what the Dragon’s Flame is after. I guess they’ve got it, now, too. People are thinking that dragons are going to try to overthrow King Twynnham. And it seems like some people want that to happen.” Eddiwarth paused, thinking of Granthurg. “I don’t, of course. That’s why I think we should get the dagger somehow.”

The lantern light flickered, making the shadows on the far wall dance in a dark and parallel motion. Mellar crossed his arms and chuckled.

Mellar smiled. “All your life, you’ve had this… this… knack for getting yourself into trouble. Not just little bits of trouble, either. You’ve always loved to play. That’s fine, but you like to play with dangerous things. You play with magic, with fire, with situations, and it always gets out of your control. And then things get burned, and people get hurt.” He gestured at the house around them. “We can rebuild, but it’s not always easy, and it’s costly. I got you into the Wizard’s Guild school because I thought you might learn some self-control. The Creator knows how poorly I’ve done trying to teach it.”

He stood up and crossed to Eddiwarth, who also stood for an embrace. Eddiwarth felt it firm and steady. Gradually, the tension eased out of his shoulders, and he responded in kind. They broke apart, and Eddiwarth’s father reached up and touched the burn scar under the scruffy beard on Eddiwarth’s neck and cheek. “I love you, Eddi. I hope you know that.” He stepped back. “But, I won’t always be around to put out your fires when they all blow up. Eventually, that’ll be up to you.”

Author’s Note: How to Be a Good Father

I’m a good father, I think. I try to be in my son’s lives, I try to guide them to the things that I know are right, and I try to teach them how to live life well. I guess that’s what being a good father is.

I don’t always do well, though. I know that I’ve projected my baggage onto them, just like my good father did to me. I see them suffer from failings and mistakes that I made, too. It’s not easy being a good father.

Eddiwarth’s dad is trying to be a good father, too. It doesn’t always work for him, either. I mean, his son literally lit their house on fire. Twice. How do you cope with that?