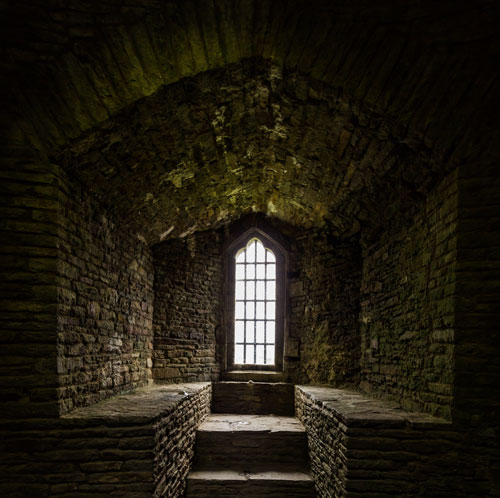 When all that’s left is prayer.

Eddiwarth coughed and lurched, his leg muscles twitching. When he opened his eyes, they burned and watered. He rubbed them with one hand, leaning up on the other arm. He became aware of the hard, cold stone below his hips and sat up, coughing more. What is that smell? I know it from somewhere.

Blinking away the smoke hovering low in the darkness, he drew in long slow breaths, keeping them steady.

He squinted through the thick gloom, but couldn’t see anything. Raising a finger, he lit a small flame at its tip and moved it around him to see better.

It was still dark. Surprised, he raised up his will to burst out a ball of flame. He coughed again and felt the emptiness. I have no will. What’s happening? There’s no power!

He remembered being grappled by a wood elven soldier on a cold winter morning in the deep of Umbrawood Forest. A harsh-smelling rag was wrestled over his mouth and nose and he had blacked out. It was much stronger than what was in the air at the moment, but it was the same acidic odor.

Further back, his mind drifted to another memory. He had just burst into reality from the mindless stasis of an entrapment oculus. Shocked and confused, the air in the manor house had been thick with mage’s bane smoke. DeFrantis and Karendle had been the ones that had released him, and who later became his closest friends.

That thought made him smile for a moment. He shifted his legs, and his foot bumped something that grunted. Blinking away the fog, he was able to make out a form, another body resting on the floor beside him. He reached out to what he suspected was their shoulder and rolled the body toward him. The shoulder flopped to the floor and grunted. It moaned a complaint and tried to roll back over. The voice was a higher tone than he expected, and his addled mind thought it sounded familiar.

It must be Illariel. He reached again to shake her awake but decided against it. I’ll let her sleep a while.

His eyes were now seeing a dim light leaking in through a space high above him. A window, maybe? There were metal bars, like a cage or a cell, and a small table with a chair, both apparently empty.

No, the table had wisps of smoke rising up. That’s the mage’s bane incense.

He dropped his head into his hands over his lap, then ran them through his stringy curls. A long sigh escaped him, followed by a dry cough.

Where is this? What am I doing here? He looked over at Illariel. And why did I get you into this?

The gloom crowded tightly around him, shrouding him in its darkness. His heart beat slowly, as if it, too, was draining of the will to go on pumping.

His thoughts drifted to that night in the manor house. He had felt just as confused and useless then as he did now. DeFrantis had been searching for some street children that had been sold to slavers, members of the Dragon’s Flame. Apparently, he’d learned later, they were to be fed to a dragon. He shuddered. Dragons. Dragons will be the death of me, I just know it.

He’d joined in the fight that night, and succeeded in burning down the manor house as they all had escaped. The manor house, the cathedral, even my own home growing up. Wherever I go, it seems that disaster flows in my wake. That’s when he’d met Thissraelle. His eyes burned and watered. Probably from the smoke.

Thissraelle. He blinked hard, and the tears ran down his dusty face. His chest shook and heaved with the emptiness inside. Thissraelle. All I wanted was to do something right for her. I just wanted to become someone who could stand beside her without fear, without failing.

How selfish of me. To think that I could match up to her. To think that I should even try. He raised his bleary eyes up, looking at… Darkness? And now I’ve hurt my other friends. I couldn’t help Granthurg in time. Illariel is stuck here. Who knows what’s happened to Parith and Korr. Shylai’a’s tough. She can get by on her own.

He scooted back, slowly, across the floor until he felt his back up against the cold stone wall. He tipped over onto his side and tried to crawl into the cracks between the stones. I’ll just hide myself here and nobody will ever find me. Parith and Ari will come for Illariel, but they won’t find me. I’ll just be a drift of dust in the corner.

The darkness enveloped him. He closed his eyes and breathed deep, then coughed.

Creator, help me! What do you flaming want from me?

Throughout much of my life, that hymn, “Prayer is the Soul’s Sincere Desire“, has been one of my favorites. Partly because of the melody and harmony, but also because of the lyrics.

This lyric isn’t the call to repentance or the preaching of doctrine, it’s a personal statement about prayer. And, since prayer is a fundamentally personal thing, it really expresses it well.

Eddiwarth isn’t a particularly religious guy, and he’s not accustomed to prayer. However, here in his dark cell, he turns to prayer. Stick with us for a few scenes and see where it gets him.