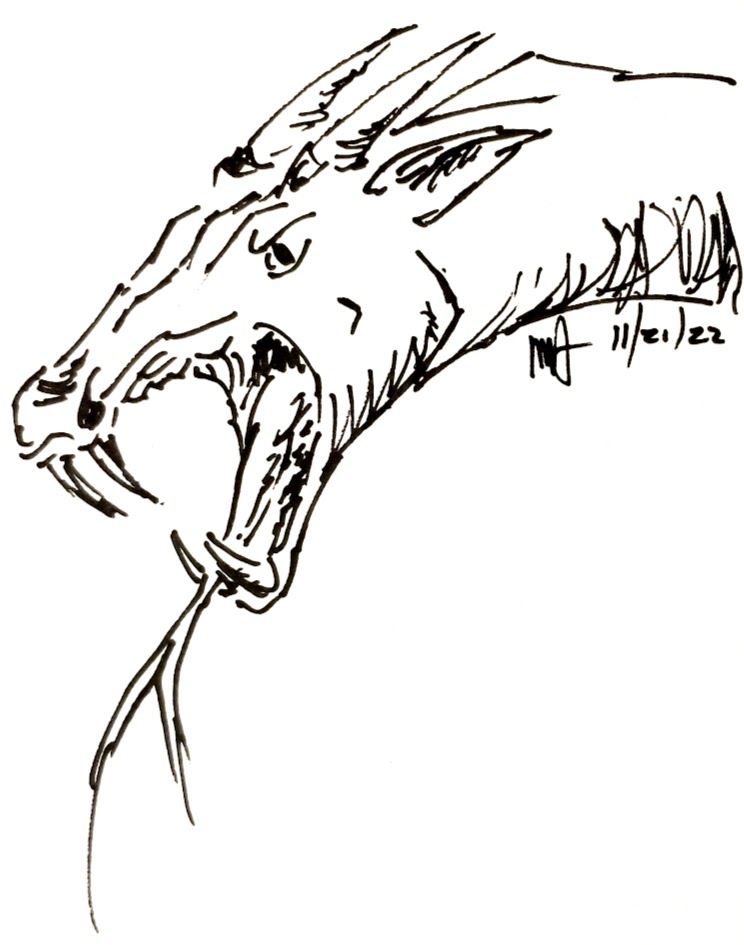 He stood up straight and breathed deep, trying to calm himself in the dark and empty throne room. He was sweaty from the night’s heat and his exertion. The cloaked body of a soldier lay sprawled at his feet, quickly staining the floor with deep purple blood. His hips and legs twisted, but the upper torso lay mostly flat on its back, and the arms lay splayed out. His discarded spear rested on his limp arm. The upturned face was dark and scaly, and the unseeing pupils were more like the slits of a serpent or a dragon than a man’s. You’re finally done!

Tonklyn lifted his gaze from the body to his hands. He gripped his right wrist in his left hand, trying to hold it steady. His breathing was helping to ease the nervous tension and anxiety.

He glanced back down at the body. He’s not moving, is he? Prodding it gently with his foot in the side, he saw that it was still.

Tonklyn blew out a breath, then stooped down and grabbed the hilt of the dagger sticking out of the dragonbonded soldier’s side. With a sickening slurp, he pulled it out, its white and ornate blade dripping with thick purple. He sighed again, then flicked the dagger, shaking off the soldier’s blood. Good. It worked. I wasn’t sure after that last one.

When Tonklyn had attacked the first dragonbonded, he had panicked, attacked fiercely, surprising and stabbing the man many times to be sure he’d be killed. Then, as he had stalked the second one, the one now at his feet, he’d wondered if he’d truly killed the first one with dragon-slaying power of the dagger, or if he’d just overwhelmed it with bloodlust and violence.

He had crept near the second dragonman guard in the darkness of the hall at night, then quickly lunged to stab him once in the side. The soldier had shaken and twitched, and its mouth had shaped a scream, but was, as always, silent and voiceless. Moments later, it had collapsed.

He thought he saw something move further along the dark hall and froze. His heart, still not fully calmed from the attacks, suddenly pounded in his chest again. Skulking aside, he pressed himself against the wall, hoping that his black ministerial robes would help hide him.

He looked again, then above and behind him. A moment later, when he saw nothing move, he began to slink along the wall. I have to move quickly, to get into place. I have to be ready when the third one comes down.

Half running, but with a careful and quiet step, he crossed the great hall to the doors behind the dais. He gently swung one of the pair wide open. Beyond it was a short but wide corridor to the spiral stairway that led up to the tower chambers Kirraxal was using as his lair. Tonklyn quickly tucked himself into the shadows he’d made between the open door and the wall. He tried to quiet his labored breathing and still his heart. He felt his hand twitch the dagger, and he gripped it tighter to keep it still.

Footsteps scurried down the stairs, then across the flat landing toward the door. A deep growling echoed through the channel from the chambers up above.

He’s coming! Another few steps and I’ll be rid of them all! His face twisted into a grin and he had to hold his breath to keep from giggling at the thought.

Another figure in a dark cloak swept into the hall, carrying a spear at the ready in its hands. It paused for a moment, snorted, then moved toward the body of its fallen cohort.

Tonklyn leaped out from behind the door and rushed to the dragonman’s back. With a grunt, he flung his arm around his neck and pulled him back into the thrusting dagger. To Tonklyn’s horror, the first strike came in at the wrong angle, and the folds of the soldier’s cloak twisted the point away from its mark. The dragonbonded struggled in Tonklyn’s grasp, pushing back against Tonklyn’s portly frame. The writhing threw them both off balance and the soldier fell backward onto Tonklyn, leaving him breathless.

His eyes wide with fear, Tonklyn held on to the man’s neck, redirected the dagger, and tried again. He stabbed with all his strength and felt the blade sink into flesh. The soldier threw its head back, smacking hard into Tonklyn’s temple with a crack. Pain shot through his head. The soldier’s arms flailed and shook. His spear clattered to the floor at his side. Tonklyn pulled out the dagger and struck twice more, just for certainty. The man shook as Tonklyn pushed him to the side, rolling away.

Heavy steps sounded from up the stairs, followed by a low threatening growl.

Gasping, Tonklyn hauled himself to his feet, still holding the dripping white Dragontooth Dagger in his right hand. He turned it in his palm as the growling and the footfalls approached the base of the stairs. His knees shook and he forced them to lock into place. He ran his hands back through his sweaty hair and swallowed hard.

Here he comes. This is it. All of my work and all of my planning will stand or fall in this moment. Tonklyn coughed.

As Kirraxal’s enormous head and neck rounded the corner and the giant beast stepped out of the stairs, Tonklyn froze. The dragon stepped through the doors into the enormous throne hall.

Tonklyn stood, shaking and gasping, over the body of the dragonbonded. He hadn’t hidden himself. There hadn’t been time. He just looked up at the massive horrific form of his Majesty and Liege Lord. AS soon as Kirraxal entered the hall, he stopped, his dark scales little more than an enormous shadow in the dim light. His gaze jumped between the soldier, the trembling blade of the Dragontooth Dagger, and Tonklyn’s harried and sweat-stained face. The great dragon seemed to catch his breath, as if not sure what he was seeing.

Tonklyn stared into the King’s eyes. The moment of recognition and realization seemed frozen in tension and wonder. Neither of the two creatures moved, but stood still, regarding each other like two opponents in a chess match, but neither is quite sure which has the next move. No one spoke, no one explained, no one commanded, no one apologized. Kirraxal huffed out a toxic-smelling breath. Tonklyn changed his grip on the dagger and his lips turned to a small smile. He stepped forward.

Kirraxal glanced down at the dagger and drew his head back. His eyes narrowed and his lips formed a snarl, as smoke began to roll from between his now-bared teeth. Kirraxal’s belly and throat started to quiver and gurgle. The dragon hurked and coughed in the back of his throat. Is that… fear?

Tonklyn jumped forward into a run, screaming. He leaped up at the dragon, sweeping the dagger down in a flowing arc overhead. He hit the beast’s belly hard but plunged the dagger into the base of the neck with a chunk.

A great shudder rippled through Kirraxal’s muscles. He roared a great scream and lashed out with his claws, striking Tonklyn and tossing him aside like a dirty used towel. Tonklyn tumbled across the floor, then curled up into a protective ball. He looked through his arms to see the neck of the dragon thrashing from side to side, screaming and smashing into the walls. The dragon’s screams choked as spittle and bile spewed out from his shaking gut and burst into flame, falling to the floor in burning blobs. The acrid smell of the flames and the smoke made Tonklyn’s eyes water. He scrambled on his back to escape the rain of fire and the rolling of Kirraxal’s seizing body. Tonklyn crawled behind a pillar and cowered until the shaking and roaring finally slowed and stilled.

He gasped in his breath, then crept around the pillar, afraid of what he would see.

In the light of the burning pyres, Kirraxal’s gigantic head and neck lay still, surrounded by an expanding pool of burning slobber. His tongue lay out from his open mouth as if he had been trying to lap up the flames. His eyes, twinkling only with reflected firelight, stared into emptiness. Other pockets of flame lay scattered around the hall, revealing the dragon’s crooked but unmoving body.

Tonklyn stepped out from behind the pillar and stumbled over to the dead beast. He found the dagger in its bloody chest and, with a heave, pulled it out.

He arched his shoulders in small circles, stretching his muscles, the wiped the blade on his robes.

He held the blade in front of him, turning it, then nodded his head and smiled.

Author’s Note: The Assassination you’ve all be waiting for.

I mean, since I teased you in the audience way back in book 1 that the dragon liked to eat human children because they were particularly tasty, he’s been pretty much the obvious bad guy. Some people like bad guys. I get that. But he’s just not at all nice.

So, It’s probably no surprise that he would be killed. That it was done by assassination is something that I hope was a bit more of a surprise. That it was an assassination by Tonklyn should have been even more of a surprise. Tonklyn has killed people before, and he’s also been indirectly responsible for a lot of deaths. None of this bothers him that much. He doesn’t usually like to get his own hands dirty, and I think it bothers him to work up the necessary emotional drive to actually do the stabbing of an assassination.

Maybe for you, this assassination is not so much of a surprise. I’ve been planning this assassination since I was midway through book 2. Originally I had planned for there to be a big boss fight between the party and the BBEG (Big Bad Evil Guy), and the assumption would be that it would be Kirraxal. But the real bad guy of A Tale of Heroes is Tonklyn, as you’ll see in the next few scenes.

Hmmm… Let’s see. according to my plugin, in order for this scene to get good SEO ratings, I have to use the word “assassination” just one more time. So… Assassination.