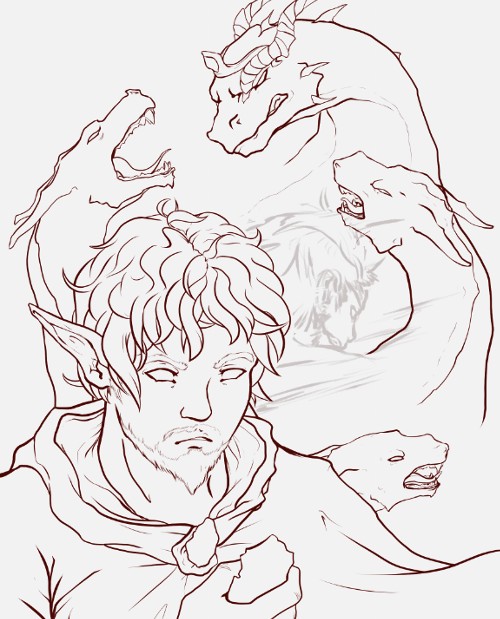 Photo by Margarida CSilva on Unsplash

Eddiwarth heard footfalls coming toward them from around the curve of the dimly lit corridor. There were a lot of them, and they sounded heavy and fast. Where can we run? There’re no doors, here! Where are we?

Almost by instinct, he crouched low against the wall, making himself as small as possible. He reached for  Illariel’s arm and yanked her down next to him. The footsteps paused, and a door handle rattled. Then they resumed, rushing closer. He pressed Illariel closely next to him.

“They’ll see us here!” she whispered, but Eddiwarth just shushed her. In a heartbeat, he sucked in a breath of the clean air and felt the swelling of his will inside him. It felt good to not be choking on mage’s bane fumes. For just a moment, a light mist of blue circled his head. The steps came running down the hall toward them. Eddiwarth reached his mind out to theirs. Four of them! He imagined himself and Illariel as supply barrels that had been left there by the servants. The soldiers rushed past them and clambered down a stairway around the bend.

As their tromping echoed away, Eddiwarth gently stood and helped Illariel to her feet. “How did they not see us? You did some magicky thing, didn’t you?”

“Yeah, just a quick illusion.” He turned and moved along the wall.

The hallway was wide and well cleaned, not like it had been in the tower. It was lit by small oculi mounted into brackets in the ceiling every dozen feet or so. They’re so dim. I guess it’s because it’s in the deep of night. I wonder if we can put them out entirely. That might help us move along. He stopped underneath one, but couldn’t reach up to it. Illariel took a couple of tentative steps farther along the corridor. She sniffed the air.

A loud roar echoed through the halls.

Eddiwarth and Illariel froze, looking in the direction of the sound, from where the soldiers had come. That’s an unhappy dragon, to be sure. Growls and snarls followed. The echoing of the many stone walls made it difficult to judge how far away they were. Eddiwarth stepped cautiously toward the sound.

“Eddiwarth!” Illariel grabbed his shirt sleeve and whispered as he passed her. “Maybe we ought to go the other way?”

He kept to the wall, trying to be as inconspicuous as possible. The more he moved, the more he heard the dragon voices. He glanced back and saw Illariel following, her eyes wide with worry. They came to an intersection in the corridor, and when they looked around the corner he saw a huge foyer with a lofted ceiling. Directly opposite them stood two ornately carved doors. They were huge, reaching as much as 20 feet high. In the dim light, they looked dark, like they had been scorched but not fully burned through. One of them was angled slightly open, and through the crack, they could see rays of light streaming out and hear the raspy and guttural voices of the arguing dragons inside. Higher pitched voices squawked and shrieked, adding their echoed opinions to the cacophony.

There are no guards. They must have killed all of the hominids. But didn’t we just pass soldiers in the hall? Eddiwarth looked around the chamber but saw no one. The voices fell silent for a moment. I wonder what they’re arguing about.

Eddiwarth crept up to the open door, trying to remain in its shadow.

Eddiwarth looked in through the open portal, squinting in the light. The hall was large and regal with colorful tapestries and heraldries hanging from the rafters in its high vaulted ceiling. Drakes of all sizes darted through the burned and broken beams, making the oculus chandeliers swing. Below them stood a half dozen full-grown dragons. Three of them circled the center of the hall, their heads low, growling and murmuring words that Eddiwarth could barely hear, much less understand. One, a huge red beast with a jagged and angular head, rose up and flared his wings as he shouted in anger. Eddiwarth saw an enormous gilded crown on his head. It reflected the light of the oculi in flashes as he moved.

“What are they saying?” Illariel’s awestruck voice drifted past him. He glanced down at her, then back up at the monsters.

“I don’t know. I don’t speak dragon,” Eddiwarth said, “But they sure aren’t getting along.”

A green and brown dragon snapped up at the larger red, who drew his neck back momentarily before roaring back. The green stepped back and circled the center of the hall, its eyes focused hard on the red. Farther in, a blue neck with a white underside raised up and growled.

These are the ones. The ones that ruined it all. These dragons are burning our city, killing our people. They’ve killed our king and his nobles, and destroyed… well, everything.

Illariel looked away, sniffing, curious. She inched toward the center of the foyer.

They’ve attacked the forest, killing the elves there. What is happening? Everything is crumbling! He looked down, shaking his head. The Destroyer is ravishing the land! He’s got everyone hating everyone. It’s all wrong. The high elves hate the wood elves, the humans hate the dwarves and the dragons have played us all. It’s all wrong.

I’ve got to stop this somehow. What can I do? How can I fix this? There are dragons in there! I’m just one little elf boy who can do a few magic tricks. In his hand, he held the single ruby gemstone he’d been carrying for so long. I never even found the dagger! I wish this gem had some real power. If it were only refined and empowered…

Eddiwarth spun, startled by her outburst. Too late, she clamped her hands over her mouth. Eddiwarth stumbled and leaned against the door for stability but swung it open. Catching his fall, he stood on unbalanced legs to look up into the angry and surprised faces of the dragons. Behind him, Illariel also saw them and screamed. Eddiwarth froze, then spoke back to her, “I see them. Don’t move.”

This is it. This is the end. Face it well. I don’t have the dagger. I don’t have any oculi. All I have is me and my will. He stood, straightened his soot-stained shirt. Does it matter? What really matters, here, anyway? All that matters is that the killing stops. He tossed the ruby lightly into the air before him, then caught it, clenching it in his fist. And if trying to stop it kills me, I’m fine with that.

Head high, he strode into the throne room.

So, it looks like Eddiwarth is willing to sacrifice himself in an attempt to stop the fighting. At this stage, he’s not even sure how he’s going to do it. Maybe just the audacity of his personal sacrifice is enough to make the dragons at least listen, right?

But look what he’s sacrificing: his life with Thissraelle, his connection to his friends, it’s all on the sacrifice block. He’s willing to sacrifice the chance to get a name and be honored.

Unfortunately, despite the sacrifice he’s putting forward, there will still be a bit more fighting and a bit more blood.