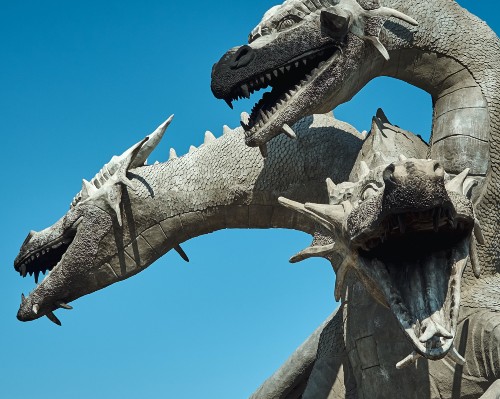 Photo by Vlad Zaytsev on Unsplash

At the start of Part 22, Ari finds the party in Eddiwarth’s courtyard. She has found where Illariel and Eddiwarth are being held. They are in the tower donjon of the palace in Centertown. Parith and Shylai’a argue over how to get to them until Korr notices that they’ve been discovered by patrolling dragons. They flee and the party holes up in an Inn, while Parith tracks down intel on the inside of the palace tower. A knight of House Northolt tells them how to get to the donjon, and to look for help from someone named Mithrabella.

That night, when Exakas returns from defeat at Emberfire with the freed dragons of the high elves, Tonklyn convinces them that they still need him in power. He declares himself the High King and sets Exakas up as the King of the Land. Xintalan is to be Exakas’ queen, but they distrust each other.

Later, on the battlements of the tower, Xintalan confronts Tonklyn. She doesn’t kill him, because he has the dagger, but she fears what will happen under his rule. She is doubting the value of the Dragon Kingdom.

Trapped in the tower, Eddiwarth and Illariel talk. She helps him figure out that for him, control of the fire magic comes not through concentration and focus, but through needing to direct the will to help his friends. Eddiwarth draws on this to overcome his fear and the mage’s bane, and blasts the lock. He and Illariel go free.

In his chambers, Tonklyn wakes up. It is late in the night. He had been dining with Mithrabella and had tried to drug her drink, but she had switched cups, and he had been the one knocked out. He notices that the Dragontooth Dagger is missing. He is furious and rushes out to find her and get the dagger.

The party sneaks into the palace grounds through the rain. They are hidden in shadow by Kiffra, the shadow wizard who helped Illariel heal Parith. Mithrabella finds them, tells them where to find Eddiwarth, and gives them the dagger. They creep through the palace, quietly arguing while looking for Eddiwarth and Illariel.

Meanwhile, Eddiwarth and Illariel stumble into the main throne room chamber to find themselves face-to-face with the dragons. Eddiwarth has to stop the fighting and, to Illariel’s horror, offers himself as a sacrifice.

Xintalan looked down on the small elf as he walked into the chamber. He had dark and curly hair like a human’s, but the wider pointed ears of a high elf. His clothes were rough and dirty but looked like they had once been finely tailored. His shoulders were back, but his pace was heavy. He had a bearing of courage, but what truly wore was sadness, not a tunic. We didn’t call for a servant. Is this a messenger from His Excell– She corrected herself– His High Majesty?

She glanced up at Exakas, who had been circling the center of the hall opposite her. His head bore the crown that Kirraxal had worn in his short reign as successor to Maxxin III. Exakas’ face was angry and threatening, his eyes darting between the elf, Xintalan, and Ryxitt. The girl’s scream and the appearance of the man had interrupted their argument. Behind him, two more dragons stood, tense and uncertain, waiting for a cue from Exakas before acting. She could hear Ryxitt making a low growl slightly to her right. Exakas opened his mouth wide, letting out a smoky hiss as he followed the man’s steps. Exakas snapped forward but immediately jerked away, like something he’d seen had stopped him.

The elf stood and made a shallow bow to each one of the dragons. Who is this? This isn’t right. He has no weapons, no heraldry, but there’s something odd about him. I’d better be ready. She started a slow churn in her stomach, and the familiar sharp smell of bile gurgled up into her sinuses.

“Ah, hello,” the man said, like he was hesitant about being polite, and bowed again. “How are you all? Faring well?”

Exakas’ eyes narrowed and he hissed, “Why are you here? Are you a messenger? Do you bring us news? Word from the High King?” Exakas must have been thinking the same thing I was.

Exakas roared, “Who are you? And who sent you?”

“I’m Eddiwarth of… of…,” his voice trailed off like he wasn’t sure of his name. “Of Mellar’s house, I guess,” he finished.

“I am His Majesty Exakas the First, Successor to the Great Dragon Kings, and ruler of this land. Kneel before me.”

Eddiwarth looked up and bowed his head for a moment again. “So, you’re the one I need to talk to.” Wind through the openings in the roof blew raindrops across the hall as thunder pealed in the distance. Exakas’ eyes widened in amused surprise before Eddiwarth went on, “I was just wondering why.”

Why? Why what? What’s this he’s asking? Xintalan looked over at Ryxitt, whose gaze was intent on the elf.

“Why,” the elf asked, “are you here? Why all the killing and the burning? What is it you hope to accomplish?”

Exakas laughed. “To rule! I am now the undisputed ruler of this land.”

Xintalan looked up at him. Well, not really, but maybe in a little while, if his plans come to fruition.

“Why?” Exakas roared, “Why, to re-establish the ancient reign of the Dragon Kings!”

“You are pathetic creatures, aren’t you? You can’t defeat the great dragons by force, so you’re trying philosophy?” The giant wyrm laughed again.

Eddiwarth shrugged. “Philosophy? I don’t really know that much about it. I’ve read a few poems, I guess. All I know is that this doesn’t really make sense. All the destruction, all the killing. There isn’t a lot of the kingdom left to rule, is there?” The sad little man looked up into Exakas’ eyes.

Xintalan drew in a breath.

Exakas just screamed, “You talk of killing and oppression, but what of the dragons that your kind killed and oppressed?”

Eddiwarth nodded. “Yeah, that’s true. You kill me, someone else kills you… A lot of us here in the world keep trying to oppress others, and all I see that comes out of it is a lot of destruction. How can you rule something that’s in ruins? Who benefits from that?” He looked at Ryxitt then Xintalan. It was as if he was looking deep into her. “It’s been a strange year. As I’ve traveled, I’ve met a lot of wonderful souls and a lot of evil ones. Everyone’s mostly just trying to figure things out. But, what do I know? I’m just a selfish wanderer with no sense of direction. What right do I have to tell the King what to do?”

Something dropped in Xintalan like she’d been punched in the gut and shattered. What right do I have? There was nothing inside her. No anger, no justification. She was empty. She had been all along. She looked at Eddiwarth, then up at the twisted face of Exakas, like she couldn’t put the two of them together and have them both fit.

“Eddiwarth!” A man’s voice shouted from the doorway, cracking the moment. Every head in the room, dragon or hominid, twisted to see another elf standing in the doorway. Behind him were more two-legs and, is that a spider? The man by the door was dressed in black and wet from the rain. He gestured to the one in the center. “Get out of there! What are you doing?”

“Parith! Stop!” The elf named Eddiwarth called back. “Take the others and run!”

Exakas roared with a thunder that overwhelmed even the storm. It shook the cavernous hallway, and the people by the door scattered for cover.

“Eddiwarth! Here” The man by the door swung his arm and threw something to his friend in the middle of the room. As it spun across the floor in the dim, Xintalan recognized it as the Dragontooth Dagger. The weapon that could kill her and Exakas. It slid until it was only a few yards from Eddiwarth’s feet. Xintalan and Exakas both held their breath at the sight of the dagger.

The elf looked down at the dagger. He stepped toward it and bent down to pick it up.

In writer-speak, an “Avalanche” refers to the part of the story where the action starts to become inevitable. The various cross-plots that the author has been carefully mining for chapters and chapters are finally getting to the point where they’ve cracked the mountainside and it’s all gon’ fall.

And the avalanche starts falling completely out of the control of the characters. They have to scramble to dodge the avalanche and all the destruction that often they, themselves, set in motion.

The avalanche is a crazy time to write and crazy to read. I love that part of a book I’m reading, sometimes even if I didn’t like the rest of it that much. When I’m writing the avalanche for my storyblog, here, I often get weeks ahead because I get caught up in it. It flows, and I can’t slow it down.

When the avalanche is all over and it settles down, then you just write the resolutions, the aftermath. The characters have to sort things out and then you set things up for the next story.

So, anyway, Part 23 is the avalanche. In case you hadn’t guessed.