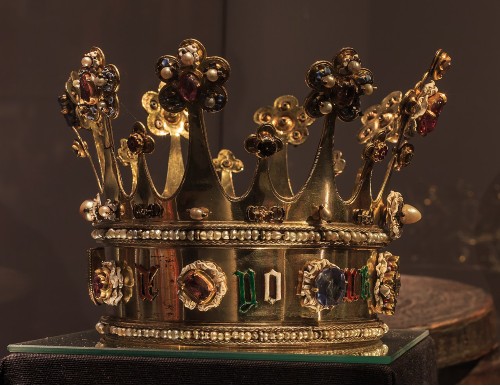 The Delicate Balance of Power

“Where is he?” A deep voice echoed through the hall.

Tonklyn looked down from the balcony above the throne room. He took a deep breath of the damp air.

Exakas, his deep red scales glistening with rainwater stormed through the hall below. He shook his wings, then his neck, spraying the nearby walls. The floor was already puddling with water as the rain poured in through the still unrepaired holes in the ceiling. Another dragon landed on the roof with a thud, then stuck his head in through the hole.

“Where is he?” Exakas repeated in a more demanding tone. He looked from side to side. Despite it being mid-afternoon, the hall was dim from the heavy cloud cover that had rolled in earlier that day.

Xintalan rose from her resting dais to the left of the main Royal platform. Her head slinked low and her eyes narrowed. Exakas locked his eyes with hers and snarled. Behind her, Ryxitt also stirred.

The other dragon, a lighter red, almost orange underneath, jumped down from the ceiling, breaking his fall with his wings. He quickly assessed the situation and fell in behind Exakas.

Tonklyn smiled. This is going to be very interesting, I think.

“Where is His Royal Majesty?” Exakas finally rasped. “I would know why he refused to respond to my contacts.”

Tonklyn leaned over the railing, straining to see better. Xintalan didn’t answer, but stepped down off her dais and began moving to her right. She kept her eyes on Exakas and her head low. Her wings flexed as she moved.

Exakas reared back and roared. “Tell me now! Bring me to him!”

“Why?” Xintalan asked, “Is it because you failed? Emberfire still stands?” Tonklyn noticed an edge of vindication in her tone. Exakas just scowled.

Exakas drew back, surprised. “What? How?”

She continued, slipping into the ancient speech of dragons, “He was slain by the hand of the human, with the dagger.” She continued slowly circling. “This, then, shows the falsehood of thy surprise, for of a certainty thou knewest already.”

“I should know?” Exakas roared, “Thou wouldst accuse me? I, who have been fighting for my life over Emberfire City? I, who have bled for the glory of our King?”

“Yea, Thou hast conspired with the two-legged devil! Thinkest thou to simply steal the throne upon thy return?”

Excellent! Look at the two of them. They’re like dogs in the street, angling to rule the pack. He felt the hilt of the white dagger in the pocket of his vestments. Gripping it, he gestured to Mithrabella then strode to the stairway behind him. She hesitated, then followed.

He heard Exakas rage, “Silence, you! I have seen thy face when he named thee his queen. Wouldst thou not be satisfied to share the crown? Thou art the conspirator and I will slay thee!”

“I alone will decide,” Tonklyn interrupted, stepping in between them, “which of you two will be slaying the other one.” The two dragons drew their heads back and up and looked down on him. Tonklyn pulled himself up to his full height, such as it was, and squared his shoulders back, holding the Dragonstooth Dagger in a tight grip before him. A shocked hush fell over the hall. Even the drakes in the rafters above were silent.

He turned slowly, directing the dagger from one dragon to the other. “Yes. Yes, I killed him. Kirraxal the great. Kirraxal the terrible! I killed him with a single slash of this blade! Why? Because he was stupid, arrogant, and weak!”

“You hold your tongue or this blade will cut it off! I was the mastermind of his reign! I planned the attack on the Cathedrals last year and the collapse of the church and the wizard’s guild! I laid the groundwork for the fall of the wood elves and the freedom of your brothers in the mountains! I stirred the Dragon’s Flame to an uprising. Without me, Kirraxal the first was nothing but an insignificant snake.

“Would you challenge me? You, who failed to conquer Emberfire? Oh, yes, I already know. Their mages decimated your flights, didn’t they? Not so fearsome and terrible, were you?”

Xintalan stepped back, and Ryxitt scowled. Exakas roared. His neck flexed and his belly churned.

Tonklyn held out the dagger point, shouting, “You will choke on that bile! The first one of you that even coughs out smoke will get this dagger in your chest. That flame will be your last breath!” Exakas froze.

The red dragon behind him rasped, “You can’t kill us all! The moment you strike one, the others will flame you!”

“Then who will be first? Eh? You? Or Exakas? Which one of you?” Tonklyn snarled, “I already killed the biggest and bravest among you! You sniveling dragons make me sick. You rave about bravery and loyalties and majesty and you sneer down your long scaly noses at me, a two-legs, and, worse, a human. But each of you wanted him dead, didn’t you? Each of you wants to rule, don’t you?”

Nobody, human or dragon, moved. Eyes darted from one to the other. A growl rumbled in Exakas’ throat. Tonklyn spun to face him, staring him down. His heart pounded in his temples.

“And each of you also knows that if you kill me, the other slobbering skybeasts will tear you to ribbons before you can even pick up the crown. And then while you’re fighting each other, the two-legs will gain and slaughter you all.” He heaved a loud sigh and held out the dagger again. “So, go ahead. Get your flame on. Burn me to a crisp. Who dies first? And who dies next?”

His chest heaved as he sucked in his breaths, and he wiped the sweat from his angry brow. He turned on his heel and marched to the central dais. Leaping up on top of it, he faced the burning eyes of the dragons. His own eyes narrowed.

“I,” he said, pointing at his chest, “I am now your king. Tonklyn the First, The High King of Wynne!”

He pointed at Exakas. “You are now the Dragon King: Exakas the First. All in this kingdom will bow to you, as you bow to me.” His finger indicated the floor before the dais. Exakas hesitated for a moment, a smile forming on the edges of his mouth. He snorted once, then closed his eyes and lowered his head.

With a satisfied nod, Tonklyn looked at Xintalan. “And you, you will be his queen,” he said, then added before she could object, “and the General of the Legions. Ryxitt will be the Primary Minister. Mithrabella!” A shuffling of feet sounded from the shadows, and the young scribe appeared, her arms shaking. “Mithrabella! Record these my first decrees. Under my most benevolent guidance, the elves will fall, the mountain halls of the dwarves and the giants will crumble, and the dragons will rule Wynne in its entirety!”

Exakas nodded through narrowed eyes before raising his head in a triumphant howl. Quickly, the dragon behind him joined in, followed slowly by Xintalan and Ryxitt.

Tonklyn smiled to himself. He raised the dagger high above his head. This is why your kind will always be easy to rule.

An interesting thing about feudalism is that it’s really all about loyalty, at its core. Being the king is all about the balance of power.

At the bottom of the hill, you have the peasants. They have nothing, especially no land and so, no power. So, they have to live on the land of a lord (which is where the term “landlord” comes from). They have to give him part of what they grew on his land, sometimes a very big part. Theoretically, he is then supposed to protect them. If this works out, he has their loyalty.

Now, the lord has power. Other lords in other castles also have power. Theoretically, there is a balance of power. But maybe one of them gets a bit stronger. Maybe his peasants have great harvests, and so he now is wealthier and can afford a bigger army. The others are either afraid of him or want him to protect them. Or both. The balance of power is off.

Let’s say a few of these lords swear fealty or loyalty to this one lord. Now his total lands increase, his access to tributes and taxes increases, and he’s now a king. Maybe he gets up an army and attacks one of the other smaller lords and takes over that guy’s land. He can only do that by convincing the other lords that have sworn fealty to him that it’s worth their time and the lives of their peasants to go off conquering. He has to watch his balance of power.

It keeps going just like a giant pyramid scheme, with everyone paying taxes and tribute up the hill and getting (presumably) safety and protection from the top.

Here, Tonklyn is on top. He got there by scheming and murder, but he still has to keep the spot by showing his subjects where they fit in his balance of power. It’s not going to be easy for him to maintain.

It’s a heckuva way to run a gov’ment…