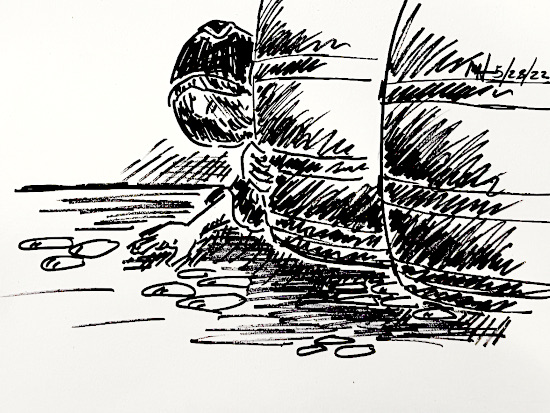 The echoes of the running feet reverberated in the narrow space between the two buildings. Tonklyn huddled low behind the barrels, his knees tucked up under his cloak as far as his belly would allow.

As the noises faded, he raised his head. He was alone, sitting on hard stone behind three large ale barrels.

Someone grabbed me and pulled me down here. He checked to his left and saw only barrels, and only hard daub wall to his right. He frowned and stood, cautiously peering over the barrels. Not only was the alley deserted, but the silence from the plaza told him that the fight was probably over as well.

“Hmp,” he grunted, giving himself a small shrug. He stepped out from behind the barrels.

“Hey! Careful!” A voice shouted below him. “Watch whe’ ya steppin’!”

Tonklyn jerked back and looked down at his feet, but saw only dirty stones. It had been a high voice, harsh and nasal, but he saw no one there. His brow furrowed and he swept his foot in front of him.

“Heyey! Woah! Easy there!” His toes hit something and he felt it move. Something fell on the clutter to his right. He thought he saw something scramble over the pile. “Stormy winds! Are ya done now? Cree! Ya help a guy out an’ he trods all o’er ya.”

Tonklyn backed into the corner of the wall and the barrels, his arms up defensively. After a moment, he shifted the hood of his cloak back to see better in the shadows.

Tonklyn squinted and focused on what seemed like the source of the sound. He saw a pile of burlap bags, tossed in a heap over a few broken baskets. He leaned against the wall and wiped his eyes. I’m hearing voices, now. Dreams, illusions, voices…

But I felt something real on my foot. And something pulled me down. I felt that. didn’t I?

“Ah,” the voice continued, a little more hesitant, “you good? You OK? You don’ look s’good”

Tonklyn opened his eyes. Still nothing there but rags. He blinked and stepped forward, trying to look beyond the clutter, but still saw no one. “Where are you?”

Something tugged on his cloak. “I’m ri’ here.” When Tonklyn turned down, the voice said, “Don’ look. Sometime’ it’s easier f’r you humans to see if ya don’ look so direc’ly at first.”

Tonklyn froze. “You humans”? What is this thing? He closed his eyes tight and breathed slow, calming breaths. Come on, Tonklyn, you’ve lived with dragons. Whatever this thing is, it can’t be any worse, right? It’s all probably just my twisted imagination, anyway.

He turned his head all the way to his left, cracked his eyes open just so slightly, and slowly looked back. Keep your eyes up, not down.

He saw the alley, the dull gray of the opposite wall, the tops of the barrels and the piles of rags and clutter, but no creature. He squinted and quickly checked again, left and right, then grunted frustration and looked directly down, seeing only cobblestones under his ragged boots and robes.

Tonklyn shook his head, rolling his eyes and stepped away from the wall. He turned left and strode around the barrels, toward the plaza.

“Wherever you’re not.” Tonklyn approached the end of the alley.

“OK, well, give m’ best to the soldiers you were runnin’ away from. Maybe they c’n find you a place to rest an’ eat.” The voice laughed, “Oh, yeh! They can! It’s inna cage under th’ guard towers in th’ city wall!”

Tonklyn froze again, leaning against the wall. This is… Who is…?

He dropped his head, took a few breaths, and asked, “How did you know I was hiding from the soldiers?”

“Ya went on ‘bout it all night.” The voice sounded a little closer this time, maybe from on top of a barrel. Tonklyn still couldn’t see anyone. “Yeh, ya said yer th’ king an they’re comin’ t’ arrest ya. O’er an’ o’er agin.”

Tonklyn pressed his eyes shut tight and rubbed his temple. This is madness. This isn’t real. This can’t be real. Can it?

Finally, he turned around. He still saw nothing but alley and junk. He asked quietly, “Who are you?”

“I’m Lombin Verdinand Welkes the Third, to serve ya, sir.”  With that introduction, Tonklyn imagined someone giving a deep, almost sarcastic bow. “You c’n call me Verd.”

Tonklyn stared into the space where he assumed Verd was standing, a twitchy sort of grin creeping onto his face.

“What?” the voice said, indignant.

All of the tension, fear, exhaustion, and sheer madness of the moment, as well as the days before, burst through Tonklyn’s chest in a fit of screaming laughter. He slouched against the wall, gasping for breath and holding his sides as he guffawed and wheezed, tears streaming from his eyes.

That’s it. Shaking, flaming stones, I can’t stop. This is all so shaken up. I can’t stop. He carried on laughing. Oh, that hurts. That hurts my sides. His head felt light and he slid down the wall to slouch on his knees. Finally, the gasping started to slow and finally eased into a string of simple involuntary giggles.

Something touched his arm with a gentle, reassuring calmness. Verd’s voice asked, “Are ya doin’ OK? Ya don’ look s’ good.”

Tonklyn wiped his eyes and searched for the face of the voice again, but still saw nothing but dim alleyway. He giggled some more.

Tonklyn swallowed hard, took a breath and forcibly stopped the laughing. He sat up as straight as he could and pulled the cloak tight around his shoulders. He murmured, “I am… the King.”

The words echoed in his head. I am the King.

I AM the King.

And this… is my kingdom.

Emotion welled up in his heaving chest again, choked his throat and exploded from his eyes as a torrent of tears. He buried his face in his hands and sobbed, his shoulders shaking under the cloak. He coughed and snorted, pulling the cloak fully around him. He hated moments like these. Moments when his world melted and he completely lost control. Everything is wrong. Why is everything so wrong? I’m the king!

I’ll show them. I’ll just lie here and die. I’ll lie here, and I’ll freeze, and they’ll find me in the morning.

Tonklyn raised his head. He still saw no one. “Verd?”

“Yer Majesty?” Verd continued, “There’s a guy I think ya should meet. I’ll bet he c’n help ya feel better.”

Tonklyn looked at the alley with bleary eyes and nodded his head.

Tonklyn is a fascinating character. For so many years, his entire focus, his entire identity was tied up in his status, his drive to become the king. For a brief moment, he had it, then it was swept away. Unable to cope with that trauma, he is now having a breakdown. It’s the first one described directly, but it’s implied that he’s had other breakdowns recently.

Now, I’ve had a minor breakdown or two, myself, in the past, and it’s not fun. In this breakdown, he’s kinda grappling with what is real and what is not. Add to this mix the very real possibility of magic (in this world), and it’s easy to see that he’s not really connected to reality very securely. When that connection starts to breakdown, then everything will breakdown!

Next week, we’ll meet up with Xintalan and see how she’s been coping with the aftermath of the big fight in the throne room. Come back often! Also, sign up for the mailing list and get a free short story as well as announcements of more scenes!