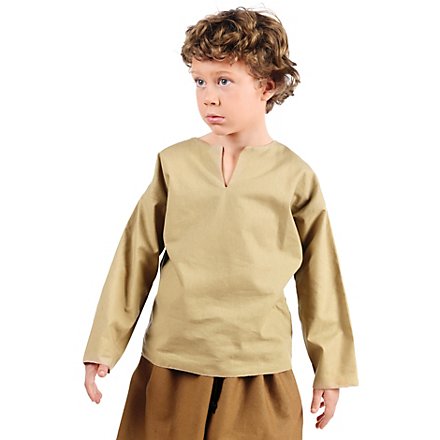 Another Champion, but an odd one

Eddiwarth opened his eyes. His head felt groggy and his vision wasn’t clear.

“Mister…?” It was a child’s voice. Eddiwarth wiped his eyes. His hands were grimy and they scratched his lids. He opened his eyes again and looked through the dark toward the voice.

It was a child. No more than 8 winters old, wearing a clean white tunic that tied at his waist and came down almost to his knees. He had a shaggy towhead and big green eyes. His cheeks were plump, in fact, his belly and arms were, too. He was barefoot, but his feet were clean and unscratched. He was reaching out and gently shaking Eddiwarth’s shoulder.

Eddiwarth drew his head back and frowned, his brows bunched together.

The boy asked, “Are you… ah… Addiewhiths?”

“Eddiwarth,” He corrected in a confused mumble.

Where did you come from? He looked around the cell. It was empty, as before, except for the chamber pot and the low spread of straw in the corner where Illariel slept. She was curled with her face to the wall. Beyond the bars was the narrow guarding chamber with the table where the mage’s bane incense burned. He could see the area a little bit more clearly as if there were a glow from somewhere.

“Eddiwarth?” The boy repeated like he was trying to say it correctly.

“What are you doing here?” Eddiwarth asked, taking the boy by the shoulders and turning him around. His clothes are way too clean to be a street kid. “Where’s your mom? Did you break curfew? What’s your name?” He doesn’t look hurt. Eddiwarth checked his wrist for binding sores.

Eddiwarth stopped and just looked at the boy.

“Oh, yeah!” he said, and giggled through a toothy grin that puffed up his cheeks, “I already know your name!”

Eddiwarth tossed his hair out of his eyes and looked closely at the boy. “Toolie?”

“Yeah! That’s me! Dad sent me.” He walked around the cell. “Who’s that?” He said, pointing at Illariel.

“My dad. He said that you had asked him for help, so he sent me to make you feel better.” Toolie walked to the wall of iron bars. They’re gapped too small for even him to get through. How did he get in?

“Did the soldiers hurt you? I mean, when they arrested you and threw you in here with us? Did they take your parents?”

Toolie looked at Eddiwarth with a scowl and an exasperated slouch of his shoulders. “I told you. Dad sent me. This room looks a lot like the one I was in for a while.”

Ok, now we’re getting somewhere. “Where was it? Come over here and tell me where you were.” Eddiwarth patted the stone beside him.

With a smile, Toolie hurried over and sat down. He gestured around him, launching into a story. “Well, it was a long time ago. I was captured with my friends, like Leyonne, and Andrina, and Marisee, and… a few others.”

“…And they put us in a room like this one. Then one day, a man came to get us. He took me and Leyonne away to a big wagon, but before he could put us inside, I bit his hand, really hard.”

Eddiwarth listened, “And then what happened?”

“I don’t know. I didn’t want him to hurt Leyonne. The man got really mad and started beating me with his stick. I think Leyonne ran away.” Toolie looked sad. “I hope he got away. I was pretty scared.”

Eddiwarth just stared at the boy in wonder.

“Anyway,” he continued, “then I met my dad and he takes care of me. He’s very nice. If you think this place is cool, you should see his castle!”

“Your dad?” Eddiwarth’s voice was hushed.

Eddiwarth’s eyes burned and he coughed, not so much from the incense, though. He wiped his cheek and sniffed, smiling. “Yeah. I think it’s true. I’m glad you found your dad. And I’m glad he sent you.”

“Yeah, no problem!” Toolie grinned. “Are you feeling better?” He started to back up.

Toolie put his hands in his pockets and turned away. He suddenly spun around. “Oh, I almost forgot! Dad also told me to give you this. I guess the soldiers took it from you… or something like that.” He held out his tiny hand and dropped a cool smooth red gemstone into Eddiwarth’s hand. Then the boy shrugged like he didn’t understand.

Eddiwarth burst out with a laugh and a huge smile. He took the gem and squeezed Toolie tightly.

Author’s Note: Another Champion of the Creator

You’ve probably guessed by now that Toolie is a Champion of the Creator. I’ve never really canonically spelled out just how a character in life ascends to the role of a Champion. In the game, there are ways that a high-level character can ascend, but in the stories, and in-game, it kinda depends more on the actions and choices of the character.

A Champion, of course, is a messenger and worker of the Creator. If the Creator sees a way that a particular person could serve and it fits His requirements, the character will ascend.

Technically, there could well be a Champion of the Destroyer as well, but I haven’t written any of those into the canon, yet.