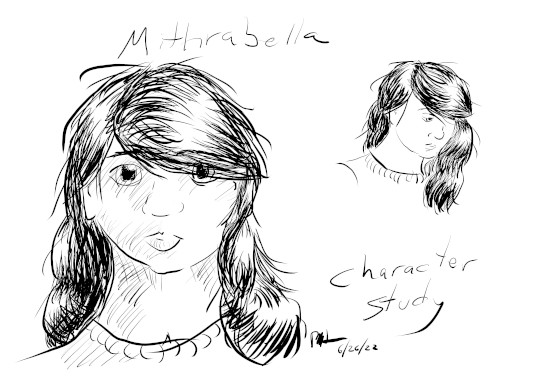 When Mithrabella woke up, got dressed, and stepped into the small sitting room of her home, her mother was humming softly and hanging lights.

Mithrabella stopped for a moment, one brow raised. The ceiling, low as it was, had been strung with dangling branches of firs and pines, filling the air with the familiar and comforting scent of Winterfest. To her right, a small fire crackled in the hearth and two threadbare chairs sat in front of it, one of them supporting the relaxed back of her father. He wore simple leggings and a loose tunic over his plump belly, and was smoking a pipe. It smoldered up in a thin and curling line, adding to the overall haze and aroma of the room. He nodded a silent greeting to her and rested his head back on the chair.

“What…?” To her right was the smooth wooden table they usually used for meals, flanked on either side by backless benches. A small stool, where her father usually ate, sat unoccupied at the long end of the table.

Her eyes focused again on her mother, who held a small glass jar containing a tiny shard of murky pink crystal. She wound a short length of wire around the neck of the bottle and hung it from a rafter next to one of the evergreen boughs. She held it for a moment and it began to glow with a gentle light. She smiled at her daughter and reached down into a bag for another.

“Mama, what are you doing?”

Her mother shrugged with an embarrassed look and wound another wire. “I’m decorating, dear. It’s Winterfest.”

Mithrabella stepped over to the table. It was strewn with cloth bags, mostly filled with greenery. She looked inside one, then the other. “Where did you get these?”

Her mom didn’t answer, but hung and lit another oculus shardglass.

“Mother! You shouldn’t be going out!” Mithrabella strode to the window, looking out. It was snowing heavily and the buildup indicated that it had been falling fairly steadily for most of the night. She spun to face her mom with angry eyes. “You should not be going out! If you don’t freeze to death, the robbers or soldiers will likely kill you!”

Her mother dropped her hands to the table in exasperation. “But I had to get us food! The larder’s almost empty! And I absolutely refuse to miss out on Winterfest. This winter, especially.”

“Mama, there’s fighting in the streets, half the city’s been burned to the ground! I would think there’s more important things to worry about than a festival.” She picked up an unhung and unlit shardglass. “How much did these cost? I’m not living in the palace any more, you know!”

“It’s a good thing, too. That man was horrible. It’s all the more reason to celebrate what happiness we do have!”

Mithrabella hissed and rolled her eyes. “Back me up, here, Dad! She needs to stay in.”

Her father just laughed and coughed up a puff of smoke. “You know that I can’t tell your mother to do anything. She’s like a certain petulant disobedient child that I seem to remember raising…”

“Oh, you two are hopeless!” Mithrabella stormed into the kitchen.

“I have some gruel boiling on the hearth,” her mother called after her, “and there’s some dried fruit in the pantry.”

Mithrabella ran a hand through her hair. It was long and dark and still a bit messy from her sleep. She hadn’t taken the time to give it the thorough combing it needed, that she usually gave it. It hadn’t seemed to matter today. She wore a black, loose-fitting housedress over her thin frame. Dressing meticulously was another of her habits that had been fading lately.

She grabbed a bowl and spoon, tossed in a handful of spiced dried apples, and walked out into the main room to the hearth. Her mom was quietly humming winter carols as she worked. After ladling out a bowlful of gruel onto the fruit, she smiled at her father and sat down at the table.

As she ate, she hung her head. This fall and winter had been very difficult for her. She liked her life nice and ordered; things in their proper place, sensible choices tracked by accurate records. Ever since the trauma of last summer, her world had become chaos. One day she had been a faithful and diligent page for the scholars and sages of the Royal library. She had been in her heaven, surrounded by order and knowledge, fetching tomes and scrolls and learning at the tables of the greatest minds in the kingdom.

The next day the dragons had swept over the city and in a matter of days burned much of the neighborhoods, the merchant quarters, the waterfront, and killed the king. Suddenly, fire rained down from beasts in the skies, soldiers clashed in the streets, and people fled in terror.

Surprisingly, the library stood safe, a haven of peace in the chaos. She remembered watching the horror from the windows of the upper levels of the library. She wanted to run to her parents, but it was clearly not safe. She had no options but to pray, hope, and wait out the conflagration.

Then the man had stormed in. He had demanded to see the chief sages, the men she had so diligently served and respected, then ordered them executed for some unimaginable slight of his past. Immediately after, he had demanded that she accompany him as his recorder and administrator. She had spent the next week following his every move and, at his order and insistence, documenting every horror, murder, and other atrocity he and that foul wyrm committed.

Mithrabella shuddered to think of him. Tonklyn, the Chancellor to the Dragon King, later the self-proclaimed High King of Wynne. Hatred welled up in her every time she thought his name. This was the man that had destroyed her world. In his own lust for power, he had betrayed his own lands to bring on the dragons, then murdered the dragon king to usurp the throne and claim the crown as his own. The dragons hadn’t waited long after that. They struck back and drove him away after only a few days of his rule.

She knew how it had all happened. She’d seen it. She had been there. And she had written it all down. Every word spoken, every drop of blood spilt, every blob of flaming bile that splashed raging hell onto the floor of the throne room. She had seen soldiers burned and the dragons killed, and had seen the rest of them inexplicably fly away. She had seen it from the balcony where she had hidden for dear life.

Then, when His High Flaming Majesty Tonklyn the Last no longer ruled, when he no longer held a tight grip on her fate, she had run, fleeing through the still burning ruins of the city to find her parents in the Innerwall Quarter. What a relief she’d felt to see them frightened, but relatively unharmed, and their home unburned. Others farther down the street hadn’t fared so well, true, but, praise to the Creator, her family was safe.

And I’m not about to let them die now, pretending that everything is normal!

She wiped her eyes and swallowed a big bite of gruel. She set her spoon down on the table with a shaking hand.

Someday, someone will have to tell the whole story. The world will know.

I love introducing a new character!

When I first started this blog story, about 5 years and three and a half books ago, I decided a few things about the main characters. One was that it would be an ensemble cast. There might be a focus, but the POV characters of each book would fit into the “adventuring party” concept of the game. The second concept was that the characters would be fluid, coming into the story, playing their part, and then retiring or, in some cases, dieing, to be replaced by other POVers. The final concept was that almost all of the POV characters have been drawn from the original 12 sample characters from the original The Hero’s Tale game rule book. Now, Book 4, “Of Gods and Dragons” will introduce the last two of these sample folk: Mithrabella and Kiffra.

These two have already been introduced as secondary (tertiary, in Kiffra’s case) characters back in book 3, and will now step up into full party membership.

Mithrabella, in my mind, has absolutely blossomed as a character in the last few weeks. She is absolutely fascinating. She has such a driving need to be in control, to have everything in her life be in its proper order. She grew up in the academic world of the Royal Library, where control, order, and logic were revered, but then the dragons came and spewed chaos all over the city. Now, she’s trying to find as much control as she can. That’s leading to clashes with her mom. Mithrabella has to learn that being factually right doesn’t always mean you handle things right. Mithrabella kinda has control issues.

Another thing that makes Mithrabella a fun character. She has three voices. One is very proper, professional, diminutive, and respectful toward the authorities she respects at the Library. Another is very academic and formal when she does her own research and writing (as shown by the excerpts from much later in her life), and the third is for when she lets down her wall of control and gets sassy and impatient with the people around her. Some, like her mom, really get the brunt of that.

Control is a very interesting power to have. It can really take control of one’s life.