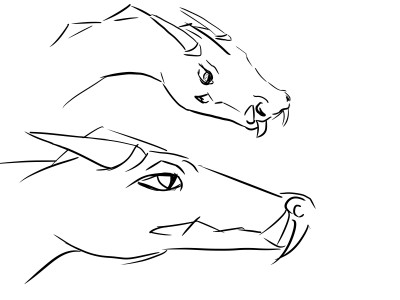 The throne room in the mountain palace fell silent as the debate paused. The last echoes faded as the sound bounced off the high vaults and arches of the carved stone ceiling. The chamber had no windows, as it had been hollowed into the depths of the mountain millennia ago by mages and craftsmen. Gilded chandeliers holding oculi provided illumination, but they were kept dim.

Xintalan sat on the dais at the head of the room, her right hand outstretched on the stone in front of her. She looked out over the previously arguing dragons, members of her royal council and closed her eyes. She took in a deep breath, trying to both calm herself and to ease the headache that had troubled her for the last few days. It had begun in the back of her head, behind her horns, where the smaller boney spinal ridges began. Now the pain was starting to creep down the back of her neck.

She had tried resting after her most recent aerial outing, but that had only eased the pain, not cured it. I’ve just strained my muscles, I’m sure of it. As she had thought it, though, she realized that after a full day of rest, her wing muscles were no longer sore, so why was her head and neck still hurting?

“Whhat I’m ssaying,” one of the dragons insisted, “iss that the elvves and the huumans are our consisstent sworrn enemies, attacking or enslavinng us for centurries. Now, both kingdomms are in chaoss, and it is our prime opportuunity to wrreak our rrevenge!” Several other dragons of the council raised their heads and roared in support.

He was a strong blue, one of the largest among the ones that had been liberated from the aeries of the elves. She had been impressed with him quickly in the first few months after their return to the mountain lairs. He was smart and relatively articulate in common speech. So, she had appointed him as one of the Royal Draconic Council. Immediately, he had become one of the more influential leaders, and a claw under her scales.

The echoes of the dragon’s voices reverberated in her pounding head as well as the hewn and sculpted chamber. She lowered her face, slowly swinging her head from side to side and murmuring, “No, nno, no.”

Another dragon, an older white from the ranges west of Emberfire, slapped his clawed palm down before him, claiming a turn to speak. Xintalan huffed smoky breath through her nose and pointed a talon at him, indicating acceptance of his claim. This was a system Xintalan herself had implemented. Their first few meetings had quickly degenerated into fits of screaming, growling, and roaring as one after the other had tried to screech louder than the other. He said, “Havve a carre and rememberr what happened merre months ago when the dragonns of Emberffire City broke ffree and rebelled. While youu did esscape, youu did not connquer. Theirr maages were strong, and mmany diied.”

“All the mmore reason to attackkh!” The speaker was a muscular young red and orange beast, impulsively interrupting the meeting without making the required gesture.

Another older red raised his head up high and shouted,  “It iss our right to rrule! It has always beenn our righht! Wee need to bring uss back to the tiime when the hominids worssshipped us as godss!” More roaring followed this pronouncement before Xintalan could call either of them out of order. He continued over the din, “Twynne Riversss is a garbagge heeap crawling with llittle ratss tryinnng to scramble for suupremascy. Clearlyy the twoo-legsss are not fit to rrule themsselvess!”

Xintalan raised herself up on her back legs and slammed both of her hands down on the dais in front of her. The gesture momentarily surprised the shrieking council into relative quiet. The crown on her head shifted loose, leaning over one eye as she threw her head forward and roared, “Norr are we ffit yet to rule oursselves!” She squinted with pain, then continued in a quieter, but still menacing tone, “We are nnot unified, we are not kinn. We have no cullture, no lawws. We’ve been sscattered and isolated for too llong. We can’t even sspeak the same languagge!”

One of the council hissed, “We sspeak this ffoul hominid tongue by yyour decree!”

“Ffor practicality onnly! Because sso few of us, rraised in captivity by the elvves, can sspeak the old wyrmkin tongue. We havve so much work to do. We neeed to beccome a nationn, centered and defined. Who are wwe? Can we only deffine ourselves byy how we khill or domminate otherss?”

A wave of dizziness and nausea overtook her and her head and neck drooped. She grunted and swallowed, her vision blurring.

“Yourr Majesty!” Ryxitt stepped up onto the dais by her side. She held up her hand to stop him. “But, my Queenn, you are nnot welll.”

She looked out over the council, the faces of the dragons were a mix of expressions. Some showed concern, others contempt, a few were smiling. She breathed heavily several times, then hissed, “I amm well enough to ssay what needs to be ssaid.”

Ryxitt nodded, then turned to the circle of wyrms in the throne room, “We shhould adjourrn or recesss and discuss this againn later. Her Mmajesty needs to rest.” The murmuring rippled through the assembled dragons was not pleased, but at least agreeable to this. Several left the great chamber immediately, while others filed away more gradually, still in conversation and debate.

Xintalan, exhausted and still in pain, held her head up while the chamber cleared, then sucked in a breath and lowered her head and chest to the stone dais. Ryxitt gently reached over and adjusted the crown on her head.

She raised her eyes to him, though her head stayed down. She whispered in the old language, “Verily, what am I doing, Ryxitt? What, I pray thee?”

He smiled, “Thou art fighting for what is right.”

She closed her eyes and humphed a puff of smoke. “Whhatever that iss…”

The first thing that Xintalan does, as the Dragon Queen, is to establish an advisory council of other dragons. This is a good thing, of course, because a council is, by nature, more democratic and a diffusion of power keeps things from getting tyrannical. Right?

Also, since she doesn’t really want to be queen, it’s nice to start sharing the responsibility.