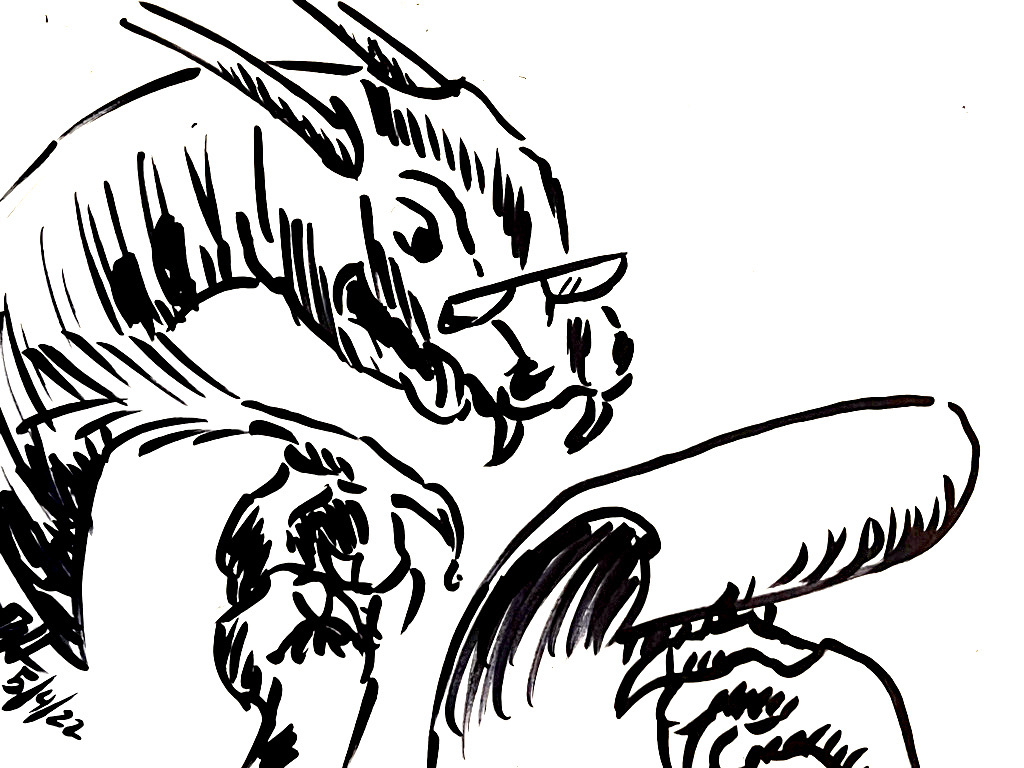 Approximately 1500 years ago, as of this writing (before the time of the canon stories of A Tale of Heroes – ED), the land of Wynne was populated by several peoples and races, mostly scattered through the lands in either the mountains, the plains, the hilly meadowlands, or the forests. They all mostly went about their lives in villages, farming and crafting and raising families. A few cities were beginning to form as economic and social hubs, like Twynne Rivers, Portstown, Gramalan, and Umbrawood.

Dragons were not uncommon in the land, but mostly kept themselves isolated, mostly in the various mountain ranges, some in the forests of Umbrawood, living separate and uncomplicated lives.

At that time, the dragons of the western mountains began to assert dominance. Eventually, other wyrms all over Wynne swore fealty to these. The hominid society was too weak and disjointed to resist, and very quickly the entire land (wyrmkin and hominid) was ruled from the dragon palace in the Mountains of Graemal (Graemal is an ancient dweorg word meaning dragon’s spine, presumably referencing the sharp peaks).

About a thousand years of rule followed. As with most civilizations, just how well it prospered depends significantly on the author of the history you’re studying. While few records remain of the early dragon kings, most of the extant draconic records speak of a flourishing of learning and culture, of freedom and enlightenment. Most hominid histories, by contrast, talk of poverty, oppression, and tyrannical and violent domination.

Before the complete corruption of the final reign of Maxxin III and the advent of the dragon pox and the First Great Dragon War, there was a particular outpouring of creative artistic and philosophical work among the dragons themselves. Most of this was considered lost in the aftermath of the fall of the dragons, but some examples were discovered and shared during the more contemporary reign of Queen Xintalan I. Even before the openness of her reign, however, some scholars, particularly of the Seekers of the Great Reality, had many of the draconic writings secretly stored and translated into common speech.

Included in these archives are some of the greatest works of dragon poetry of the era, including works by Heathrax Dragonfriend, by many considered to be the master of the form. Because of the kindness of Xintalan, I, myself, have had many opportunities to study these works, both ancient and contemporary. I’ve tried my own hand at the form as well, though I consider myself more skilled at academic prose. Nonetheless, both winged and two-legged folk should avail themselves of these beautiful and/or interesting pieces and the practice of their creation!

The poems of the dragons are short, almost always one stanza, and with rare exceptions, have no titles. The impact of the poem of a dragon is intended stand on its own without the additional explanatory or preparatory contextualization of a title. We human academics have, for ease in discussion, have befouled many of them with catalog numbers, but those should not be included when read or recited. In fact, my own research has shown that the idea of a printed, published, and studied collection would have been baffling at best or insulting at worst to most of the draconic philosopher poets of the age. We hominids, however, love that sort of thing.

A dragon poem has five lines or phrases, divided into two couplets and a final line.

The first couplet contains two lines describing the first image or the “setup”, setting a scene or an idea in the mind of the listener. The two lines support and reinforce each other, in a sort of “rhyme of meaning” or “a rhyme of motif”. The dragons have no concept of an audible rhyme.

The second couplet presents a second image or idea, in a development of the thoughts or the story brought on by the first couplet.

The final line is known as the “stinger”, or the “barb” (it’s tough to translate from the old wyrmtongue into common speech, but it refers to the spiky or pointy thing that’s sometimes on the tail of a dragon). This line brings the summation of the poem as a sort of “line of impact”.

There are no length limitations or requirements or syllable counts of any line in the poem, but the goal of the barb is to pack the whole idea, or the stab, of the poem into as few words as possible

The couplets are usually full of images, the style and source of which will depend on the author. Heathrax, for example, lives a quiet life of exile in the the Emberfire mountains, so he draws on that for imagery a lot. He also writes of flight and the tableau of the landscape as seen from the air. The few examples we have of Maxxin III, on the other hand, are more forced and violent. Ryxitt the Wise tends to be more philosophical and the few works of Queen Xintalan are more imaginative and fantastic.

These are among the many examples in Heathrax’s Catalog that deal with his feelings on war and pacifism. These ideas were certainly colored by his his own experiences both as a military leader and as a pro-hominid activist and subserquent exile. My interviews with his student and associate Thissraelle Dragonfriend indicated that these ideas were his rationale for refusing to interfere in the struggle that culminatged in the collapse of both the reigns of King Hastonne and King Kirraxal. – MithC

A Poem by Ryxitt the Wise

My own interactions with Queen Xintalan indicated her struggle with the role of queen and the nature of Royalty. She attributes this poem, written for her, as being instrumentenal in her decision to accept the crown in the first place. The lower catalog number occuring so late in the poets life does not indicate that he wrote little, but rather that very little of his work has survived him. – MithC

A Sample by Maxxin the Third

Clearly, Maxxin III was not at all skilled in the form. His disdain for philosophy and poetry are well documented in his short time of influence. It’s inclusion here is more as a historical curiosity than out of any respect for his art. – MithC

A Poem by Queen Xintalan I

And lastly, one of my own attempts:

Well, I can’t study the form of the poetry without at least trying it myself a few times. I am a historian and a scholar and I find these works fascinating. Their historic and cultural value is immeasurable. However, I make no personal claims of artistic mastery. I will leave that role to others.

So, as I was writing book 2, “Of Wizards and Dragons”, one of the clues that Thissraelle gets as she’s searching for Heathrax is a book of his poetry. At the time, however, she thinks she’s looking for a Hominid, not a dragon (Spoiler alert! Sorry!). I’ve loved writing poetry for many years, so the chance to throw a few poems into my prose was very exciting.

Plus, it made a great hook for Thissraelle and Eddiwarth to start bonding.

As I approached the task of writing some poems, I asked myself, “What sort of poetry would dragons write?” Heathrax, by the time of his exile and the onset of the pox, was quite the philosopher, and his pacifistic ideals were taking shape. That would, of course, color his poems, but there would theoretically be many, many other poets among the dragons. Lots of cultures and languages have their poetic forms (Sonnets, Haiku, pop songs, and even limericks), so it made sense to me to create a new poetic form for the dragons.

Credits are due: My good friend, Jill Baker (as Queen Xintalan I), and I have had a great time writing and discussing these samples, attributed to the various dragon characters based on their personalities and perspectives in the story. We would love to see others poets, dragon or hominid, contribute to the canon! Post your efforts in the comments below!