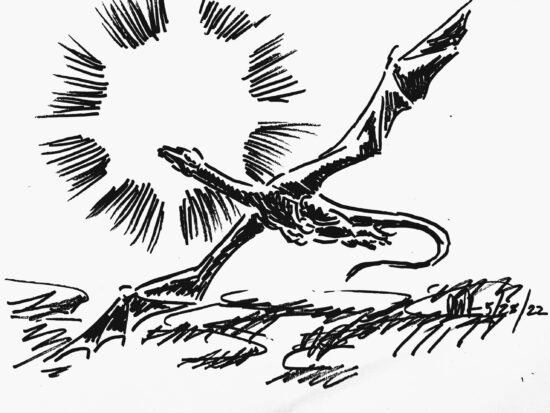 The rush and pressure of the air pushing back against the open folds of Xintalan’s webbed wings felt good. She kept her eyes closed as she soared, reveling in the cleansing wash of the frigid wind flowing over her face and horns.

Above her was a bright and full expanse of azure. This high up, there were no clouds, no trees, no cliffs, and no noises, nothing to disturb her. No birds screeching and squawking, no drakes screaming at each other… No one shouting in the dragon council, no one trying to declare war, and no one whispering behind her tail.

Only the rush of the wind in her ears.

The unbroken sunlight shone all around and warmed her green and brown scaled skin, even as the harsh cold of the altitude in winter threatened to freeze her.

I’m a dragon. I am a creature of fire itself. Why would I freeze? Instinctively, she opened her mouth and widened her gullet, swallowing a small gulp of air. That wisp of oxygen mixed with the bile in her guts, where it ignited. Not explosively, like it would have had she churned the bilge up and spit it out into the open air, but it smoldered slowly in a very controlled way, feeding warming energy into her whole body. She opened her eyes and sucked a slow breath into her lungs. Her throat tightened from the blast of cold, but quickly relaxed as the fires warmed her from the inside.

That warmth felt good, too.

It all felt good. Good to get away from the pressures and constant duties. Here she was one with the sky. She was not Her Majesty, the Dragon Queen. She had no responsibilities and no fears.

Ryxitt said I would rule with wisdom. Wisdom! I have no idea what that even means.

That frustration suddenly churned within her again, as it had often in the last few weeks, giving her nausea and dizziness. Today it fed more flames. Feeling that energy flowing through her muscles, she grit her teeth and flexed her long wings. She drove her frustrations and confusion down hard, trying to leave them behind, to fly far away from them. She arched her neck, turning her face up to the sun, her body following, rising with each powerful wing stroke.

She grit her teeth as her wing muscles began to strain against her weight. Feeling it first in her long webbed wing fingertips, the soreness then drew into the arm muscles on the leading edges and finally into her shoulders and back.

The air was slightly thinner here, and much colder. Her muscles ached. She sucked in the frozen air and for a moment her lungs felt like breaking glass. She clawed at the sky with her hands, trying to climb higher and higher.

It was even a struggle just to fold up her wings and bring them forward again.

Against the pain and churning in her guts, she shoved her wings downward.

Finally, she was done. She couldn’t move, couldn’t lift a wing. Her back and shoulders burned with exhaustion. She opened her eyes and looked straight into the burning sun. Her body hung in the stasis of inertia for only a moment, and she closed her eyes again and slowly started her descent.

She tumbled and rolled in the air, picking up speed as she fell. The air felt different, now. Before it was exhilarating, invigorating. Now, it was urgent and threatening.

I lived alone almost all my life. Why do all of these dragons think they need someone to command them?

As soon as she asked that question, she knew the answer. She turned belly down and dropped her head and neck low into the onrush of the wind. It rumbled in her ears. The layer of white clouds below her looked like a soft pillowed bed ready to welcome her into a long sleep.

Most of these dragons were raised as captives by the high elves, treated and trained like they were livestock. How can I expect them to rule themselves?

She half expected an impact when she hit the clouds, but, of course, there was only the sudden gray surrounding her, enveloping her as she fell into it.

She exploded out of the lower clouds into a gray overcast day. It wasn’t stormy; there was no snow or fog, just dim light filtering through a sky crowded with dull clouds. The ground below was brown and dry, with patches of weeks-old snow still on the shady sides of the hills. She knew there would be more snow coming soon. She’d seen the cloud forms while she was flying above. But it wouldn’t be there for a few days yet.

The air was much thicker here below and not as cold, but still definitely not warm. It bore a heaviness, a weight that she felt all too keenly. She saw the empty meadows getting closer. She could make out individual trees scattered along the rolling hills. She sighed. It’s time to go.

She bent her head and body back, straining against gravity and rushing air. She gradually unfolded her wings, letting them fill with wind, and shifting the angle of her fall. Dipping one wing, she slid into a slight turn.

The ground was much nearer, now, and the wind making her eyes water blurred her view. The turning and swirling of the landscape below began to make her stomach churn. She extended her wings fully, and the strain was very hard on her aching muscles.

She tried to level off, out of the circle pattern, but she wasn’t able to bend the wingtip quite yet. Bile and gas was building inside and she coughed and belched a thick and acidic plume of smoke out of the sides of her mouth. It tasted horrible.

With a heroic exertion, she flexed her wings forward and down just a bit, pulling herself fully out of the fall and into level flight. She opened her eyes just as a cluster of tall and empty trees rushed under her, not ten feet below.

She smiled, holding herself steady over the hills, feeling the thrill of speed as the topography flowed under her in a blur of greenish pale so fast she could barely even see it. She closed her eyes and sighed. Oh, to live out in the wild again.

Finally, she slid into a graceful turn, pointed herself toward the western mountains of Graemal, and angled her wings upward. Her head drooped a little as she gradually gained altitude and gravity slowed her flight.

While Tonklyn’s whole identity and, in fact, his internal conflict is tied in with his desire to be the King, Xintalan’s wearing of the crown of the Dragon Queen is the very source of her struggle. She doesn’t want to be the Dragon Queen.

She’s fun to write. I have big plans for her in book 4. As I started writing about her in book 3, she was an incidental character. I had no intention of her ending up in charge as the Dragon Queen, or even becoming a POV character, one of the 5-man band, the party of the main storyline.