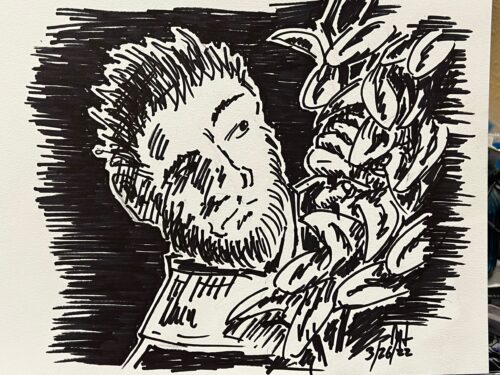 I know they’re here, but they won’t see me in the dark.

Tonklyn peeked out from around the tree, then ran through a huge gap in the wall around the palace. Broken stones lay where they had collapsed weeks ago during the initial attack of the dragons. The attack that he had planned, he had directed. Not the stupid dragons. Climbing over the stones wasn’t easy in his cumbersome black ministerial robes.

He threw himself, tense and breathing heavily with exertion, against the other side of the wall. He brushed the hair out of his face and adjusted his robes. He had made it into the courtyard. He scanned the grounds, quickly, carefully. It was a quarter moon that night, so it was hard to see into the shadows.

They can slip through the shadows. They’ll try to find me and kill me. But I’m too smart for them.

He smirked. A dog barked in the distance, triggering another one farther away. Tonklyn held his breath and listened.

He slid along the wall then looked left and right before dashing across the more narrow part of the courtyard to the far wall of the palace. Shuffling along the wall, keeping low, he reached a tall bush and tucked himself under it.

Every night they’re here. But they won’t find me.

He edged his face out to look around the bush. The courtyard was deserted. He surveyed the wall of the palace above him and saw the stained glass windows in a row along the wall. Two of them farther along the wall had been broken out.

I’ll climb up and into those windows. It’ll be much easier than the other side last night. But it’ll be there this time. It’ll be there.

Slinking around the bush and along the wall, he stood under the broken window. Glass crunched under his feet. His neck stretched and angled to see so far above him, but he was still able to inspect the sill and the broken frames. I can do it. Then down the hallway and into the throne room. Tonight, the dagger will be there.

He stretched out his arms and shoulders, took a deep breath, then jumped up and grabbed onto the window sill. He let out a quiet hiss as the glass shards cut into his fingers, but he held on, gritting his teeth. He tried to get a grip on the stones with his feet as they slipped and slid on the wall below.

I’ll find it again, and then the dragons will have to obey me!

I am the King!

Tonklyn’s kinda losin’ it. He had everything so nicely delicately balanced, and it all hinged on the control he had of that Dragontooth dagger.

Now, he thinks that if he can get it back, he can keep his kingdom together.