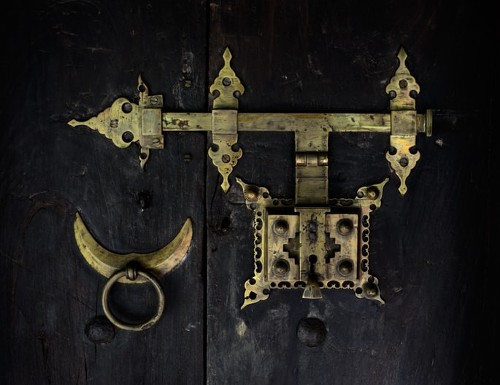 Eddiwarth shook her shoulder, rolling her gently on the straw padding. When she didn’t respond, he tried again. “Illariel! Wake up!”

She rolled onto her back and wiped her face. “Noyet ’mstillsleepy…”

“Come on!” Eddiwarth insisted, patting her face, not so lightly. He stood and walked to the wall of iron bars at the edge of their prison tower cell. He heard Illariel rustling on the straw.

He glanced back over his shoulder at her. Through the dark and smoky air, he saw her stretch her arms behind her and drop her head to her lap, tossing her hair over her face. Eddiwarth laughed.

She straightened quickly with a confused look. “What’s so funny?”

He glanced back down at the lock on the swinging barred gate, then knelt to study it more closely. It wasn’t easy to see in the dark. I need some light. Bobbing his head up and down then back and forth wasn’t giving him a better angle to reveal anything more of the lock’s mechanism.

“What’s with you?” Illariel asked while pinching the cloth of her shirt at the shoulders and shaking it loose of the straw. She made a sour face. “If I live through this, the first thing I’m going to do is jump in a stream and bathe.”

Eddiwarth continued trying to inspect the lock. He grabbed one of the bars of the gate and shook it, rattling it against the lock. “Well, let’s see if we can make that happen.”

Illariel stepped over to him. “What are you talking about?”

“We’re breaking out. We’re going to find the dagger, and find our friends.”

“I heard you, I just didn’t believe you.” She leaned over him to see what he was looking at. “How are we going to do that?”

“I have no idea.” Eddiwarth smiled and returned his focus to the lock. He tried to stick his fingernail into the keyhole, but as large as the opening was, it was still too small. He leaned in close to try for a better look again, squinting in the smoggy darkness. “Any other questions?”

“Um, yes,” She breathed in deep. “Who are you and what have you done with Eddiwarth?”

“Aah! Flameit! I just can’t see anything!” He sat back on his heels for a moment, scratching his beard. “If I could just see where the bolt hits the striker plate or the internal workings of the lock…” He leaned toward it again, reaching his left hand away from his chest and flicking his finger. It glowed and he brought it back to the lock. “Oh, that’s better.”

They both stopped, surprised, and looked in wonder at his finger. At the tip burned a small tongue of flame, like a single candle.

“I…” Illariel said, her eyes dancing between the flame and its reflection in Eddiwarth’s eyes. “I thought you couldn’t do that… with the mage’s bane, and such…”

Eddiwarth looked at the flame mesmerized. How is that happening? It felt good, like the little flame was also burning inside of him. His lips drew up in a gentle smile. “Mage’s bane suppresses your will. Maybe if your will is deep enough, it can overcome the bane.” Illariel nodded and smiled back before he returned to inspecting the lock with the light. Illariel stepped closer, her own eyes wide and amazed.

I still can’t see too much. But there’s the bolt. “Is there a stick over there? Something in the straw, maybe? I need to try and reach inside this.”

Illariel hurried over to the bed to look. “I can’t see. It’s still too dark over here. Bring the light.”

Eddiwarth tried to get up without shifting his finger too much. It wasn’t easy, but he braced himself on the iron bars of the gate. As he pulled on the bar to heft himself up, his hand slipped and he fell. Instinctively, he twisted his hips and swung his arms to stop the fall, but in an instant, he hit the floor and the cell fell dark, the flame extinguished. He groaned.

“What happened?” Illariel rushed over to him, but her eyes weren’t yet accustomed to the dark. Eddiwarth stood and rubbed his hip where it had hit the hard stone.

Flaming flames! Can’t I get a break? He rubbed his eyes and shook his head.

“It went out!” She said and he nodded. “Can you light it up again?”

His vision adjusted and he looked at his finger in the dim. It wasn’t singed, blistered, or even swollen. He rubbed the tip with his thumb and other fingers. The nail wasn’t even disfigured. Well, I did it once. Why can’t I do it again? It should be easy. It was easy.

He glanced over at the gate and the lock. What about that? It should be easy. He turned to face the gate and set his feet with determination. His eyes narrowed on the large box of metal that housed the mechanism. You are in my way.

He stared at the lock, not as a mechanical device, but as an opponent. You are what stands between me and my friends. What keeps me from saving the people of this city. He dug into his heart, looking for will. He took a deep breath and coughed, the incense smoke burning his lungs. Another burning started to form in his chest. I helped Thissraelle in the chapel. I helped the people in the street. I helped Andrina. As the warmth swelled inside, he breathed deep.

His hands felt hot like they were burning, but not. Like they had felt when he had helped Thissraelle fight the dragons at the shrine. He looked at them, smiling, then clasped them together and pointed them at the lock. A blast of heat and energy shot from his fists and exploded on the metal block sending sparks of melted iron flying and skittering across the stone. The force of the shot tossed Eddiwarth back a step, and the impact swung the squeaky gate open a few feet. The shattered remains of the lock continued to glow yellow, sparking and melting onto the floor.

Eddiwarth blew out the breath he’d held. He felt alive. I’ve never felt my will surge like that. He looked down at his hands, no longer hot, and completely unburned. He nodded and smiled.

Then he looked up at Illariel’s stunned face. He quickly bowed to her and gestured at the opening. “Please. After you.”

Eddiwarth has learned two types of powers, being Mental and Striking. Mental includes things like telepathy, telekinesis, and illusions. Striking is more for things like fighting and combat, and Eddiwarth focuses on Fire magic. As we’ve seen in the past, his fire magic tends to get out of control a bit too much, like when he lit his family home on fire.

Both of these, the mental powers and the fire magic, match his spontaneous and impulsive personality. Here in book 3, he’s gotten a lot moodier as he’s been trying to learn to control his fire magic and earn his worthiness in Thissraelle’s eyes.