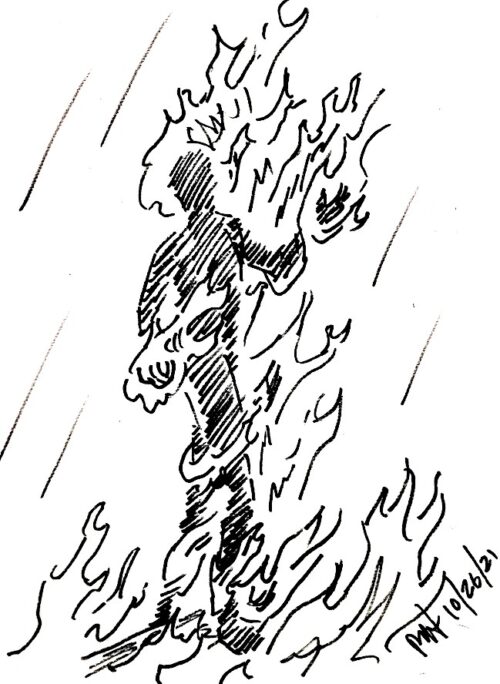 How to Be the Flame

All around him was brightness and heat. Whites, reds, oranges, and yellows swirled past his gaze, burning and raging all around him. It was… mesmerizing.

He looked down at his hands and jolted.

He waved his arms and spun frantically, trying to escape the flames. The intense heat pressed in on him and he flailed, swiping at his shoulders and chest, trying desperately to throw the burning bile from his clothes. He wanted to scream but held his breath. His lungs ached to suck in air, but he knew that would only burn him from the inside.

He fell to his knees, wrapping his arms around himself. I’m dead! I’m burning alive! I’m burning–

He lifted his head to brave another look at his arms and hands, lifting and turning them to inspect them more closely. They were, in fact, burning. Flames surrounded them, licking up into the air in a swirling vortex. The heat was intense.

But he felt no pain.

His skin, his shirt, and his pants were all burning, but not blackened. He felt his face, slick with a heavy layer of sweat and ran the flaming fingers of his left hand through his burning hair.

Flames, by the Creator, what’s hap-

He stopped and examined his arm. His left arm. His mouth agape, he gawked at it, covered in fire, and made circles with his elbow. It didn’t hurt. He stretched his back and flexed his shoulder. That didn’t hurt, either. He stared at it.

It looks completely normal! Well, other than the fact that it’s on fire, of course.

He stood staring at his burning hands. This is just like that night so long ago, except that it doesn’t hurt. The fire spun around him in a vortex, just like it had in his old living room, but this time he felt no fear. He noticed something in his other hand, the ruby, the gem that Thissraelle had given him. It shimmered in the firelight.

Did this save me? Did it have power after all? Let me see… He took a deep breath and tried to bring his will into focus. He felt it surge up inside of him. Wait. I have will left? Surprised, he directed it at the gem, narrowing his eyes in concentration. In a moment, he knew. No, it’s not empowered. It’s just a gem. Just a raw gem that needs to be refined.

He felt the burning inside him, around him, through him. He saw the long tongues of red, orange, and even white lick and shimmer around him, with the whooshing and rushing sound filling his ears.

Is this how I’ll get my earned name?

No. I don’t need an earned name. He felt something hidden inside him catch on fire and burn away. It made him feel brighter, hotter.

But I want Jaxil to respect me.

No. I don’t need him to respect me. A crackle sounded and something split away from his back. It cracked again and fell to the floor, breaking into tiny glowing coals and scattering across the floor.

I need to stop messing things up and burning things down.

No, I won’t hate myself when I make mistakes.

And I see all the good I do.

Layers of himself popped and peeled away, some falling as ash to the ground, others breaking away and flying upward with the torrents of air.

I need to prove myself worthy of Thissraelle’s love.

No. I AM worthy of her love.

And my own love.

The cleansing fire around him raged, burning deep into his soul. He breathed it in. When he exhaled, it rushed out of him like a flaming arrow. Each breath burned him clean from the inside.

I am the flame.

He stepped forward and the flames moved with him. He noticed that the flames were not as hot as before, not as all-consuming. His fears, his doubts, and the stones weighing down his soul were, for now, all ashes on the floor, and there was little left to burn. He walked past the rubble and the bodies of dragons and humans leaving behind his impurities and inclusions. He felt alive! He felt new! He felt full and warm, and finally, refined and empowered.

He could see figures moving beyond the thinning conflagration. “Eddiwarth, is that you?” He turned to the voice and saw Parith and Illariel standing together, shielding themselves from the heat still radiating from him. He waved to them with a burning hand and laughed out loud.

“Yes, it’s me. Eddiwarth.” He took a deep breath and released the flames to float upward and dissipate into the dark vaults above.

Author’s Note: Be the Flame!

I thought about this scene for a long time. I mean a LONG time. Like, over a year.

What would the moment be like when he figured out his life? I bounced around a lot of ideas, and one thing that really stuck with me was that moment when he is engulfed in flame and he steps up and says, “I am the flame”. It would no longer control him, but rather, he would control the flame.

Then, much later, as I kept thinking about it, I thought about him doing it as a sort of personal sacrifice, and I thought about the flame cleansing him of his insecurities and his issues. It would be a sort of refiner’s flame, if you will.

I’m really pleased with the way it turned out. I think Thissraelle will be, too.