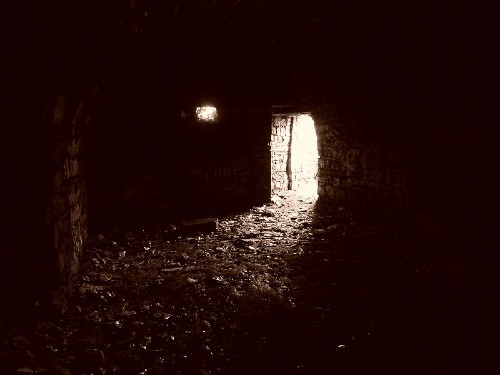 “I miss Ari.” Illariel sighed, then coughed. She leaned up against the cold stone of the wall of their cell in the dungeon tower. “I miss my mom and my family. I’ve never been away from them this long. They’re probably worried, what with the fighting and the attacks all over the world.”

She leaned forward and rested her head on her knees. “I really miss Ari. I mean hugely. I wish she were here with us.”  She set her head back against the wall again. “Well, no. I don’t wish she were trapped, like us, I mean, what true friend would want to have their friend in a prison tower, right? I just mean… flames, I don’t know what I mean. You know what I mean?”

Eddiwarth just looked at her from across the dark with that same blank expression he’d had for a week. Illariel sighed again. More than a week. Ever since he found out his friend had died.

She asked, “Did I ever tell you how I met Ari?”

Eddiwarth nodded. His eyes, however, continued to stare blankly into space.

She set her head down again.

What I miss most of all is nature. All there are here are stones. Cold carved stones. Nothing but stones. And that foul-smelling mage’s bane smoke stuff. I want to feel the trees around me! It’s the end of summer! I should be jumping through the leaves and swinging over branches! Not caged up in here like a… like a… in a…

She glanced at Eddiwarth again. He hadn’t moved. Is he breathing?

He didn’t move for a moment then nodded and ran his hand through his stringy hair.

“How did you meet her?” She asked. Eddiwarth rolled his head to look at her. “Yeah, I guess I’ve already asked that, haven’t I?”

Eddiwarth coughed then muttered, “The real question is whether or not she misses me.”

“I’m sure she does!” Illariel countered. “She’s probably terrified that you’ve been hurt in all the dragon attacks. She’s probably out there looking for you. She saved you once, you know.”

Eddiwarth wiped his lips with his fingers and itched his beard. “Yeah, I got myself captured and she had to rescue me. How heroic. Did I ever tell you that story? Oh, yeah. You were there!”

Eddiwarth stood and walked toward the iron bars that formed one of the walls of the cell. He leaned forward against them, wrapping his arms together on the other side. “No, I’m sorry.”

He turned around and rested his back against the bars. “All my life, I’ve gotten myself into troubles. I’m always messing things up. And in the process, I make trouble for everyone around me. Did I ever tell you about setting my house on fire when I was a kid?”

Eddiwarth coughed out a cynical laugh. “I’m not surprised.”

He crossed his arms and dropped his head. He slid down the bars to the floor. “My magic always gets away from me, out of control. Back at the Wizard’s Guild, they used to tell us that to do fire striking magic we needed focus, concentration, discipline. ‘Fire is an untamed beast and you need to be its master’. I could never focus enough.

“Then Korr told me to ‘be the flame’. I have not even the slightest idea what that means.”

He shook his head. “No, Jaxil is right. His fair daughter is already tenfold the wizard that I will ever be. She shouldn’t waste her time missing me. She deserves someone confident and sure of his powers, someone who gets things right and can get things done.”

He looked at her with a disbelieving smirk.

“Yes, you have,” she continued, “like that fight in the inn right when we got captured. You rescued that man and his son. I don’t know how you did it, but you parted a thick wall of flames to get to them. By the time I got in, I was certain to find you as a charred crisp. But there you stood, ordering me to help you.”

She saw a confused intensity come over Eddiwarth’s eyes as he thought about this. “Think back,” she said. “How did you do it?”

He shrugged. “I… I don’t know. I just…” he rubbed his eyes. She reached up and held his shoulder. He continued, “I wasn’t going to just let them die. I couldn’t just… I had to do something.”

She shifted and sat on her heels, kneeling beside him. “Maybe you need less focus.”

“Maybe you need something besides the flames to concentrate on.”

She shifted, a little bit excited. “Think back to all the times when you got the flames to obey you. The times when it mattered. What were you thinking about?”

“Someone always needed rescuing, needed help, didn’t they? You told me all the stories, and I was there for a few of them. Think about it!”

Eddiwarth was silent, but Illariel could almost hear the dissonance in his head. She patted his shoulder, then embraced him. “You’re a good man, and when Thissraelle gets you back, she’ll be lucky.” She stood. “Just think about all that while you can.”

Author’s Note: What Is a Good Friend Worth?

I remember watching the Yu-Gi-Oh cartoon with my sons when they were young. I loved that they always talked about the power of friendship, but, honestly, I don’t think it was handled very well by the writers. I mean, each of the characters in the protagonist party could rely on his friends for support, but that doesn’t really help much when you need to top-deck just the right card to fill out your combo, ya know?

Dueling, in this case, is a one-on-one affair, and you can’t say to your friend, “Hey, give me that Blue-Eyes White Dragon I need!”

Here’s where there is real power in friendship. Your friends can help you see things about yourself that you can’t see yourself. Things like this that you can act on.